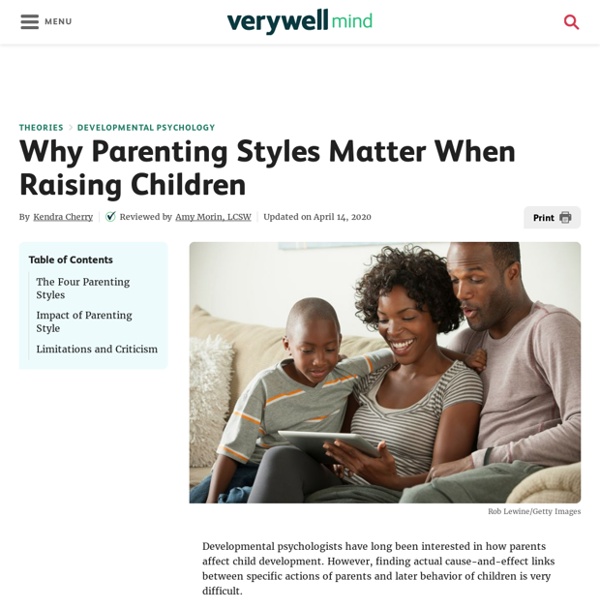 Developmental psychologists have long been interested in how parents affect child development. However, finding actual cause-and-effect links between specific actions of parents and later behavior of children is very difficult. Some children raised in dramatically different environments can later grow up to have remarkably similar personalities. Conversely, children who share a home and are raised in the same environment can grow up to have very different personalities. Despite these challenges, researchers have posited that there are links between parenting styles and the effects these styles have on children. And some suggest these effects carry over into adult behavior. The Four Parenting Styles In the 1960s, psychologist Diana Baumrind conducted a study on more than 100 preschool-age children. These dimensions include disciplinary strategies, warmth and nurturing, communication styles, and expectations of maturity and control. Authoritarian Parenting Authoritative Parenting

5 Ways Millennials Are Changing Parenting Forever Millennial parents, the cohort born between 1980 and 2000 of which there are an estimated 22 million of in the U.S., are astutely tailoring their parenting style to the needs of their family while challenging traditional societal norms. Shaped by an era dominated by post 9/11 security concerns, international conflicts, and a massive global recession, millennials have channelled a climate of uncertainty into a commitment to providing their kids with the best possible childhood. Here are five ways millennial parents are changing parenthood forever. In just the past five years, the international successes of Amy Chua’s Tiger Mother and Paula Druckerman’s Bringing Up Bébé starkly highlight differences in parenting approaches.

The Definition of Authoritarian Parenting Authoritarian parenting is a parenting style characterized by high demands and low responsiveness. Parents with an authoritarian style have very high expectations of their children, yet provide very little in the way of feedback and nurturing. Mistakes tend to be punished harshly. When feedback does occur, it is often negative. Yelling and corporal punishment are also common in the authoritarian style. During the 1960s, developmental psychologist Diana Baumrind described three different types of parenting styles based on her research with preschool-age children.

The Four Parenting Styles And Their Influence On Children Sometimes we plead our kids, sometimes we command them. Sometimes we say yes to their fancies, and the other times we say no. But what exactly is our style of parenting? Most parents follow a mix of styles depending on the situation and the age of our children. But, interestingly, we do not realize that we may be leaning towards one of the four broad parenting styles demarcated by psychologists.

4 different types of parenting styles and how do they effect your kid? Introduction: Recently I was taking a walk in a park and I happen to notice a kid of four or five years with his maid. He was very enthusiastically relating to an incident that happened in his school to the maid. But the maid was not interested. What Is My Parenting Style? Four Types of Parenting One of the interesting things about being a parent is that there is great variation in how we raise our children. At the same time, there are many commonalities from one parent to another. In fact, there is enough similarity that researchers have tried to group parents into four common parenting styles. Your parenting style refers to the combination of strategies that you use to raise your children.

Why Being an Authoritative Parent Is the Best Approach What kind of parent are you? Which would you say best describes your parenting style—someone who is demanding and controlling; someone who is warm and responsive; or someone who indulges their kids and rarely disciplines? As in the case of Goldilocks and the Three Bears, one of these approaches is clearly better than the others. The Four Types of Parenting Styles Characteristics and Effects of Uninvolved Parenting Uninvolved parenting, sometimes referred to as neglectful parenting, is a style characterized by a lack of responsiveness to a child's needs. Uninvolved parents make few to no demands of their children and they are often indifferent, dismissive, or even completely neglectful. The Major Parenting Styles

What Is Authoritative Parenting? Authoritative parenting is characterized by reasonable demands and high responsiveness. While authoritative parents might have high expectations for their children, they also give their kids the resources and support they need to succeed. Parents who exhibit this style listen to their kids and provide love and warmth in addition to limits and fair discipline. How Different Parenting Styles Affect Children In my previous blog post, I shared some traits of four different parenting styles. Based on my years as a researcher and educator, with a Ph.D. in Psychology and Doctorate of Education, I've learned that each parenting style has the possibility of affecting children in different ways. Children of Authoritarian Parents The child of an authoritarian parent -- a parent who offers too much structure and too little communication -- often feels insecure, performs for approval, and connects approval with love.

4 Types of Parenting Styles and Their Effects on Kids Your parenting style can affect everything from how much your child weighs to how she feels about herself. It's important to ensure your parenting style is supporting healthy growth and development because the way you interact with your child and how you discipline her will influence her for the rest of her life. Researchers have identified four types of parenting styles:1 AuthoritarianAuthoritativePermissiveUninvolved Each style takes a different approach to raising children and can be identified by a number of different characteristics. Authoritarian parenting: What happens to the kids? Photo by CEphoto, Uwe Aranas © 2010-2017 Gwen Dewar, Ph.D., all rights reserved The authoritarian parenting style is about being strict and stern.

Culturally Responsive Parenting Parents are a child’s first teachers Parents are a child’s first teachers, and a nurturing relationship between a parent and child supports optimal early childhood brain development.1 Children develop in an environment of relationships, and the environment into which a child is born and the type of parenting that she receives have a major effect on her later development and well-being.2 The influence of these early relationships and environments becomes evident the nature of the attachment that develops between a child and her parents.

What Is Permissive Parenting? Permissive parenting is a type of parenting style characterized by low demands with high responsiveness. Permissive parents tend to be very loving, yet provide few guidelines and rules. These parents do not expect mature behavior from their children and often seem more like a friend than a parental figure. These parents tend to be the polar opposite of the so-called "helicopter parents." Instead of hovering over their children's every move, permissive parents are incredibly lax and rarely make or enforce any type of rules or structure.