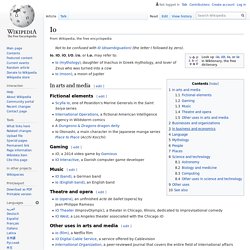 Phaethon. Mythology[edit] Phaethon, challenged by Epaphus and his playmates, sought assurance from his mother that his father was the sun god Helios. 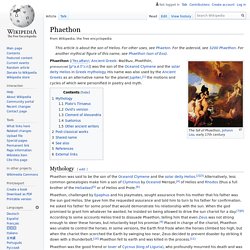 She gave him the requested assurance and told him to turn to his father for confirmation. He asked his father for some proof that would demonstrate his relationship with the sun. When the god promised to grant him whatever he wanted, he insisted on being allowed to drive the sun chariot for a day.[7][8] According to some accounts Helios tried to dissuade Phaethon, telling him that even Zeus was not strong enough to steer these horses, but reluctantly kept his promise.[9] Placed in charge of the chariot, Phaethon was unable to control the horses. Aegipan. Ancient Greek mythological figure Notes[edit] 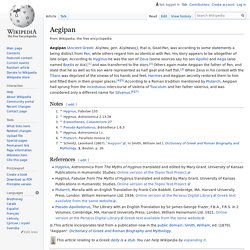 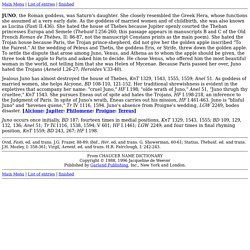 She closely resembled the Greek Hera, whose functions she assumed at a very early date. Syrinx. Nymph transformed into hollow water reeds in Greek mythology In literature[edit] The story of the syrinx is told in Achilles Tatius' Leukippe and Kleitophon where the heroine is subjected to a virginity test by entering a cave where Pan has left syrinx pipes that will sound a melody if she passes.[2] The story became popular among artists and writers in the 19th century. 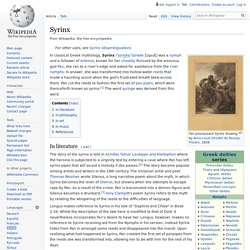 The Victorian artist and poet Thomas Woolner wrote Silenus, a long narrative poem about the myth, in which Syrinx becomes the lover of Silenus, but drowns when she attempts to escape rape by Pan. As a result of the crime, Pan is transmuted into a demon figure and Silenus becomes a drunkard.[3] Amy Clampitt's poem Syrinx refers to the myth by relating the whispering of the reeds to the difficulties of language.

The story was used as a central theme by Aifric Mac Aodha in her poetry collection Gabháil Syrinx. Amalthea. From Wikipedia, the free encyclopedia Jump to navigationJump to search Amalthea may refer to: 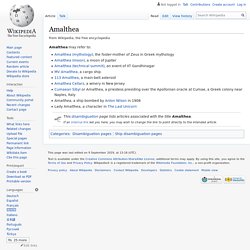 Pan. From Wikipedia, the free encyclopedia Jump to navigationJump to search Pan may refer to: 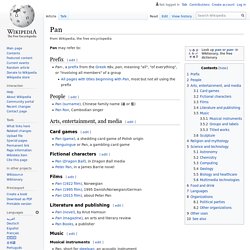 Diana the Moon Goddess – The Phases of Diana. While Diana is a triple goddess with many aspects, her connection to the moon is possibly more important to her identity than her huntress aspect. 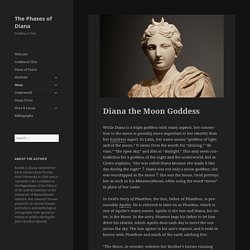 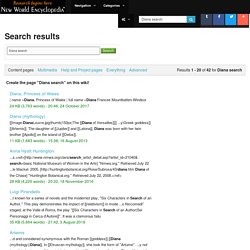 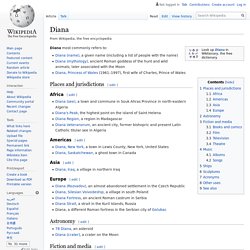 Myth, Goddess, & Cult. Diana, in Roman religion, goddess of wild animals and the hunt, identified with the Greek goddess Artemis. Her name is akin to the Latin words dium (“sky”) and dius (“daylight”). Like her Greek counterpart, she was also a goddess of domestic animals. As a fertility deity she was invoked by women to aid conception and delivery. Though perhaps originally an indigenous woodland goddess, Diana early became identified with Artemis. There was probably no original connection between Diana and the moon, but she later absorbed Artemis’s identification with both Selene (Luna) and Hecate, a chthonic (infernal) deity; hence the characterization triformis sometimes used in Latin literature.

Greek mythology. Arethusa, in Greek mythology, a nymph who gave her name to a spring in Elis and to another on the island of Ortygia, near Syracuse. The river god Alpheus fell in love with Arethusa, who was in the retinue of Artemis. Arethusa fled to Ortygia, where she was changed into a spring. Ortigia: Utterly Mythical. Ortigia, the island off the coast of Syracuse in Sicily (Italy) is as Strabo wrote ‘utterly mythical’. It is one of the principal candidates for the location of the birthplace of Leto’s twins, Apollo and Artemis. It is home to a Roman Catholic Duomo (Cathedral) within which is encased a complete temple to the warrior goddess Athena; as well as the spectacular ruins of one of the most ancient Temples of Apollo and the secretive ruins of an Artemision, temple to Artemis.

During the more than 2 weeks I stayed there, I spent lots of time exploring the island and speaking to both visitors and locals. Along the way, I had some incredible experiences, which included meeting a man so dedicated to Apollo that he had transformed his substantial palazzo into a shrine to the God. The Fountain of Diana in Syracuse and Arethusa’s metamorphosis. At the center of the fountain he created in Syracuse, Giulio Moschetti (1847-1909) portrayed Diana, the goddess of the hunt, in all of her calm and pride. At her feet, Alpheus looks on in amazement as his beloved Arethusa turns into a fountain: appalled by the river god’s erotic pursuit, the nymph had asked for Diana’s help, leading to her metamorphosis. She sunk into the ground and emerged on the island of Ortygia, the oldest part of the Sicilian city.

He is often described as the father of tragedy.[3][4] Academics' knowledge of the genre begins with his work,[5] and understanding of earlier tragedies is largely based on inferences from his surviving plays.[6] According to Aristotle, he expanded the number of characters in the theatre and allowed conflict among them; characters previously had interacted only with the chorus.

The gods that dwell in the milky way