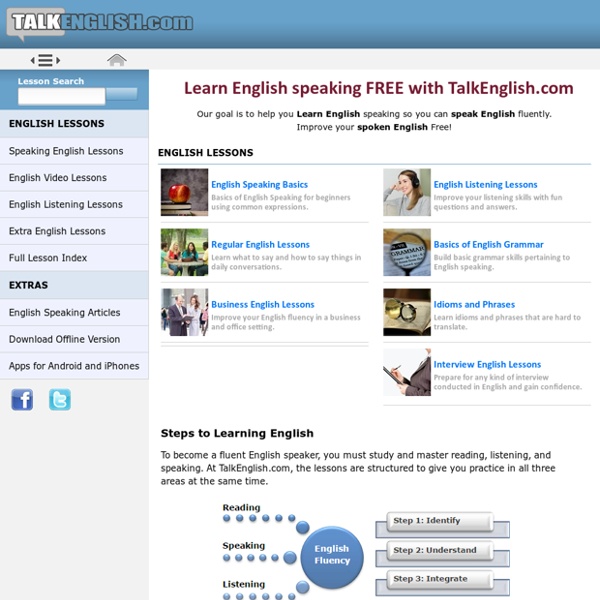 Tongue Twisters: It can help with your pronunciation A tongue twister is a specific sequence of words whose rapid, repeated pronunciation is difficult even for native speakers. Often these are similar words which follow one another but differ in certain syllables. Alliterations are also frequent. In addition, some tongues are difficult because of their unusual word composition (sentence structure) and therefore require a high level of concentration. Some Tongue twisters are made for amusement, but on the other hand, professional speakers such as actors, politicians, and television / radio hosts use them as articulation exercises. WebEnglish.se Every spring the Swedish schools must arrange National Tests in English for all 9th graders to attend. An essential part of this test is speaking English. The students need to be able to tell something about themselves, their experiences and/or their thoughts, and also to discuss given topics with a few classmates.

197 Educational YouTube Channels You Should Know About 197 Educational YouTube Channels You Should Know About If you don’t have a YouTube channel as an education provider, there’s a good chance you’re behind the times. Nearly every major educational institution in the world now hosts its own collection of videos featuring news, lectures, tutorials, and open courseware. Just as many individuals have their own channel, curating their expertise in a series of broadcasted lessons. These channels allow instructors to share information and blend media in unprecedented and exciting new ways. From teaching Mandarin Chinese to busting myths about Astronomy, the educational possibilities are virtually endless pun intended! Because we can now sift through thousands of resources while navigating a single repository, the potential for inspiration and growth in the field of education has reached a new height.

Advanced - proficiency English EFL/ESL worksheets A list of EFL, ESL worksheets each based on a stimulating article that will raise issues worth discussing. Each worksheet has a a number of exercises highlighting and practising vocabulary and grammar points in the article. The material is intended to be suitable for upper-intermediate and advanced classes. • Kids behaving badly • Love on the Rocks: are men from Mars? Why American English is more traditional than British English in many ways Oct. 19, 2017, 9:57 AM 514 Error loading player: No playable sources found Business Insider spoke to Philip Gooden, author and expert on the origins of the English language, about why the variety of English used in the US is different – and more traditional – to the variety of English used in Britain. Read the full transcript of the video below. Philip Gooden: "Americans have taken some British English terms.

Speaking aids Probably you agree that these little things make a lot of difference and it is with good reason why people spend time, money and energy to get the right small objects to help them put themselves and their loved ones into the right mood. Why use speaking aids Post-it notes Walls Coloured paper Small objects To control turn-taking As metaphors Conclusion Why use speaking aids In contrast, we often expect that our students have the right mood to speak without having anything that would help them to be in the right mood to speak, or any prompt that would help the flow of ideas. These small prompts or small speaking aids get especially important when children get into the age when they want to speak about themselves more than e.g. about the little animals or fairies in a tale.

English Express Adriana's story Here is an amazing story about Adriana. In 1986, she was left beside a road when she was a baby. Everyone's a Critic: Analyzing Sitcoms as Cultural Texts Nick at NiteMary Tyler Moore, career woman, with Ed Asner, abrasive boss, in “The Mary Tyler Moore Show.”Go to related article » Overview | What can television sitcoms teach us? In this lesson, students investigate the claim recently made in The New York Times that new hit sitcoms are proof that “we’ve reached the End of Comedy.” They watch sitcoms with a critical eye and ultimately choose a writing project that demonstrates a close viewing that treats the shows like literary texts. Materials | Computers with Internet access, chart paper and markers. Optional: television equipped with DVD or streaming video, DVDs of sitcoms.

English Grammar Quizzes - Easy (ESL, EFL) <CENTER><a href=" Levels 1 & 2 | Levels 3 & 4 | Levels 5 & 6 | Level Unsorted Activities for ESL Students has thousands of activities to help you study English as a Second Language. This project of The Internet TESL Journal has contributions by many teachers. Level 1: Try these first.