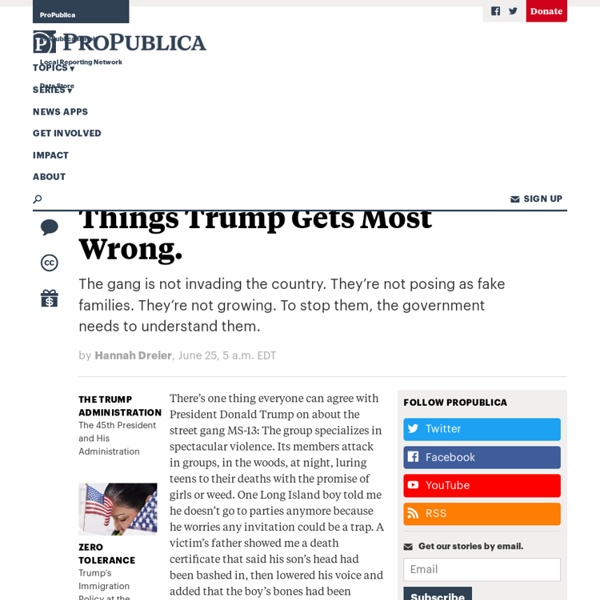 There’s one thing everyone can agree with President Donald Trump on about the street gang MS-13: The group specializes in spectacular violence. Its members attack in groups, in the woods, at night, luring teens to their deaths with the promise of girls or weed. One Long Island boy told me he doesn’t go to parties anymore because he worries any invitation could be a trap. A victim’s father showed me a death certificate that said his son’s head had been bashed in, then lowered his voice and added that the boy’s bones had been marked by machete slashes, but he didn’t want the mother to know that. A teenager who has left the gang told me he considers himself dead already, and is just trying to make sure MS-13 doesn’t kill his family. I’m spending the year reporting on MS-13 members and their associates. 1. Trump often talks about how MS-13 has carried out a string of murders in the suburbs outside New York City. 2. And some MS-13 members are born right here. 3. 4. 5. So What?

Trump can dodge London’s protests – but Scotland is ready for him Donald Trump thinks he can avoid London’s protests, but Scotland will be ready for him. His bid to avoid the passionate protests against him by bypassing the capital has sparked tittering all across the UK. I can only deduce that, after hearing about those pesky sharia-loving liberal Londoners, the abundance of Scots offering to give Trump a “Glasgow kiss” was only too inviting for the groping-obsessed American. The naivety of the presidential office is almost endearing. After the betrayal of the Brexit vote, Londoners and Scots were instantly united once more – but this time it was down to their shared contempt for a man so repulsive even his own wife won’t hold his hand. While the London protests will heartily continue, the baton and the big-baby-Trump balloon have been firmly passed to Scotland to make sure Trump gets the welcome he deserves.

Fact-checking an immigration meme that's been circulating for more than a decade A viral image on social media -- one that’s critical of illegal immigration -- has been circulating for years. The list of claims first circulated in the form of a chain email in 2006, according to Snopes.com. Six years later, we checked several of the claims ourselves. With immigration in the headlines today, these claims are popular again. So we’ll take a fresh look at them here. All told, the list is heavy with claims that are unsupported, misleading, or simply wrong. Trapped in a hoax: survivors of conspiracy theories speak out Conspiracy theories used to be seen as bizarre expressions of harmless eccentrics. Not any more. Gone are the days of outlandish theories about Roswell’s UFOs, the “hoax” moon landings or grassy knolls. Instead, today’s iterations have morphed into political weapons. Turbocharged by social media, they spread with astonishing speed, using death threats as currency. Together with their first cousins, fake news, they are challenging society’s trust in facts.

Donald Trump Is Doing Putin's Work in Ruining U.S. Alliances, Says Ex-envoy to Moscow President Donald Trump is outdoing the Kremlin in spoiling U.S. alliances around the world, a former envoy to Moscow has said ahead of a global summit with disgruntled foreign leaders. Trump is set to attend the first G7 summit since his administration controversially imposed tariffs on Canada, Mexico and Washington’s closest allies in Europe, despite protest from the leaders of all involved and against the advice of U.S. senators from both parties. The move was one of the clearest signs yet that the Trump administration does not stand by commitments to U.S. partners made by generations of previous presidents. One person who will be gleefully watching the deepening of a self-inflicted schism between the U.S. and its friends overseas is a man who is no longer invited to these summits—Russian President Vladimir Putin, according to Washington’s ex-envoy to Moscow, Michael McFaul. Related: Asked about “terrible” Trump call, Macron says you are better off not knowing

A Russian 'troll slayer' went undercover at a troll factory Slaying online trolls can be a lonely business. Just ask Russia’s Lyudmila Savchuk, who first exposed the story of Russia’s disinformation campaign back in 2014. The journalist and 33-year-old mother of two, Savchuk started noticing websites and social media accounts attacking local opposition activists in her hometown of Saint Petersburg with a frequency she hadn’t seen before. Saudi Arabia accused of torturing female activists by electrocution and flogging leaving them unable to walk Campaigners have accused Saudi Arabia of subjecting several activists, including female human rights defenders, imprisoned since May to torture and sexual harassment. More than a dozen women’s rights activists have been detained for months, most of whom had campaigned for the right to drive and an end to the Kingdom’s male guardianship system, but some have since been freed. A group of UN experts last month called for the immediate release of six female human rights defenders they said were still being held incommunicado in Saudi Arabia. The arrests in May followed an earlier crackdown on clerics, intellectuals and activists in September 2017, in an apparent attempt to silence potential opponents of the country’s de facto ruler Crown Prince Mohammed bin Salman.

5 easy steps that explain just how out of bounds Donald Trump's FBI move really is But what Trump has done -- and is doing -- in regard to an FBI confidential source who had conversations with several people in his campaign orbit in 2016 is the sort of thing that should make every citizen stop short. This goes well beyond the standard-issue norm-shattering that Trump has made his regular operating procedure since he began running for president. This veers into the sort of line-crossing that has very real -- and frightening -- consequences for the democratic experiment.

Truth, truthiness, triangulation: A news literacy toolkit for a “post-truth” world We were guaranteed a free press, We were not guaranteed a neutral or a true press. We can celebrate the journalistic freedom to publish without interference from the state. We can also celebrate our freedom to share multiple stories through multiple lenses. But it has always been up to the reader or viewer to make the reliability and credibility decisions. It is up to the reader or viewer to negotiate truth. News literacy is complicated. Why we need to talk about the media’s role in far-right hate When it comes to the threat of Islamist terrorism, no one doubts the role of radicalisation. The internet, hate preachers such as Anjem Choudary and Abu Hamza, and the western-armed, extremism-exporting state of Saudi Arabia: all play their part in radicalising the impressionable. When it comes to the far right, however, this consensus is absent. The reason for this is as obvious as it is chilling: the hate preachers, recruiting sergeants and useful idiots of rightwing extremism are located in the heart of the British, European and American establishments. They are members of the political and media elite. Less than two weeks ago, dozens of Muslims were murdered in Christchurch.

Trump's Budget Wouldn't Erase Deficits, CBO Said Under President Donald Trump’s proposed budget for fiscal year 2018, there would have been hundreds of billions of dollars in deficits each year from 2018 to 2027, according to projections from the nonpartisan Congressional Budget Office. That contradicts Acting White House Chief of Staff Mick Mulvaney’s claim that the U.S. “would actually be on a glide path to balancing the budget” had Congress enacted Trump’s desired plan. CBO did say that deficits and debt would be lower under Trump’s plan than they would have otherwise been under law at the time. But, while the Office of Management and Budget projected that Trump’s budget would add $3.2 trillion to the deficit over that 10-year period, CBO estimated deficits would increase by $6.8 trillion. And, in 2027, when OMB projected there would actually be a $16 billion surplus, CBO estimated a $720 billion deficit.

Death by sex and television? It’s how Trump would want to go “The Storm rolls back in,” ran some promotional material Stormy Daniels posted early on Friday, and – as is increasingly the case – it was not immediately clear whether it related to her adult film work or her gathering legal battle with the president of the United States. Whichever it was, I enjoy Stormy’s relentless message discipline. In so many ways, her attorney, Michael Avenatti – who loves to go on television, and has yet to make a mistake on it – has a dream client. Stormy is smart and self-aware, and has an amusing line in dispatching her critics.