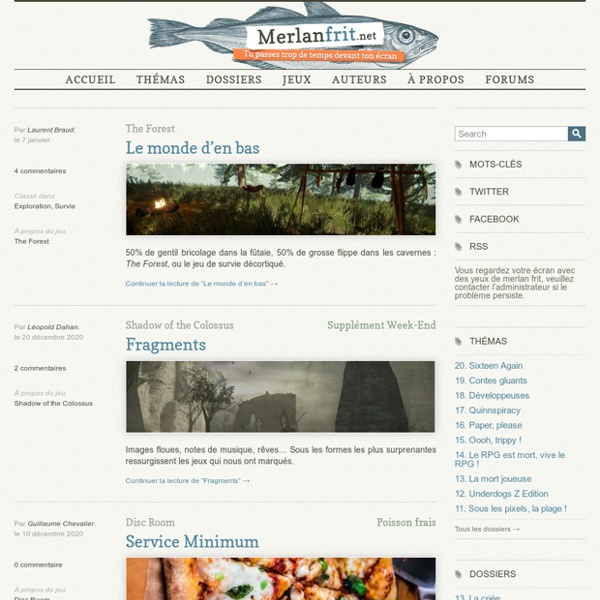 The queer masculinity of stealth games - Offworld When I reach the bottom of the subway stairs, three men unpeel themselves from the wall and approach me. They’re appallingly tall, larger than me in all respects, their shoulders hulking around their ears. Words are exchanged; I don’t quite remember what they were. I wait for threats, demands for my money, hate speech, but none of it comes. Download Bergensbanen in HD Friday November 27th, over 1,2 million Norwegians watched parts of «Bergensbanen» on NRK2. The longest documentary ever? At least the longest we have made, almost 7 1/2 hours, showing every minute of the scenic train ride between Bergen on the Norwegian west coast, crossing the mountains to the capital of Oslo.

braid-ending-explained-by-jonathan-blow Jonathan Blow has explained the rationale behind some of Braid's ending and story. The creator of the indie platformer talked about the game's closing chapter during a director commentary session at Nottingham's GameCity festival. Blow said that the design of the epilogue was meant to show that the world was "falling apart" and explained why the text books were hidden from the player. "The epilogue, which I neglected to talk about [earlier this evening], actually has puzzles in it. More Chris Marker Online GORGOMANCY menu Continuing our tribute to Chris Marker, here is GORGOMANCY, his flash website that debuted last year. It contains a version of his CD-ROM Immemory, his video tour of Ouvroir, and the entirety of his 1989 miniseries L'Héritage de la Chouette (The Owl's Legacy), a record of a 13-part symposium on Ancient Greece supported by the Onassis Foundation. From Stopover in Dubai GORGOMANCY also hosts Marker's secretive film Stopover in Dubai. Stopover is the haunting reconstruction of Mahmoud al-Mabhouh's murder in September 2010.

Ridealong: The Underground Fight Clubs Of Dark Souls III When Dingle arrives at the circular ruins outside the old church, the first thing he sees is a man in a crown, holding a flaming torch – it is the man he must kill. But the crowned man shows no fear, he simply waves and beckons him over. Dingle is curious. Issue 1701, 2017 Just Games by Espen Aarseth From the next issue Game Studies actively welcomes articles on games in general, and will not be limited to an empirical focus on digital games. It is time to recognize that the study of games cannot and should not be segregated into digital and non-digital; and that for most of the field, in practice, as well as in theory, this has never been so.[more] An Enactive Account of the Autonomy of Videogame Gameplay

Hotline Miami: Critical Analysis Doing reviews and analyses of specific games is kind of out of form for Problem Machine, but I seem to be doing it a lot nowadays regardless. The thing is, I’ve been playing these games and they’re just too damn exciting, they set my brain on fire with new ideas for things to talk about it and the most logical way to talk about all of these disparate ideas is to talk about the games themselves. So: Why fight it?

Divinity: Original Sin 2 ignored 2017’s biggest trends, and that’s why it’s great I am compelled, for professional and self-indulgent reasons, to play every “great” game in existence, and thus I have become a skilled juggler of platforms and genres. In 2017, I juggled my ass off. PC, Switch, Xbox One, PS4, VR, mobile — every platform in my collection was occupied by an army of best-in-class games from developers large and small. Figuring out which game to play became less like juggling and more like a daily battle royale for my attention. The frequent king of the hill, and my personal game of the year for 2017, was Divinity: Original Sin 2, or DOS2, a PC-only “CRPG” (computer role-playing game) of the isometric Fallout variety. This is an unconventional choice.

&apos;King of Kong&apos; star stripped of high scores, banned from competition Famed high-score gamer Billy Mitchell, best known for his leading role in "The King of Kong: A Fistful of Quarters" documentary, was officially stripped of his "Donkey Kong" and other video game high scores and banned from submitting scores to the world's largest tracker of video game world records following a decision that he cheated, Twin Galaxies announced today. "With this ruling, Twin Galaxies can no longer recognize Billy Mitchell as the first million point 'Donkey Kong' record holder," the group wrote in its announcement. "According to our findings, Steve Wiebe would be the official 1st million point record holder." Variety has reached out to Mitchell and Wiebe for comment and Guinness to see if his record there will stand. The decision comes after months of research by the administrators of Twin Galaxies, which tracks world gaming records and helps the Guinness Book of World records validate gaming scores, according to a statement released by the group Thursday morning.

The 100 Greatest Indie Games of All Time Here at The Indie Game Website we are the absolute authority on deciding what is and isn’t good. We don’t care about your shouts of “subjectivity” and “taste” – we’re right you’re wrong, and that’s all that matters. So, given our unchallengeable authority, you can be certain that when we make a list of the best indie games, they’re gonna be the best indie games.

Gaming’s toxic men, explained This story is not another attempt to chronicle the activities of racist and misogynist men who harass women and people of color on social media and in multiplayer games. Nor is it an existential inquiry into their particular niche in the video game community. Rather, this story asks: Where do they come from? Why they are here? And what allows them to stay? What follows are interviews — under a variety of rubrics — with 11 writers and academics who have studied and published useful work on the problem of misogyny and racism in gaming and in popular entertainment. Was that a reference to Magritte? Design/ Play/ Disrupt review Video games are a unique and sometimes messy mixture of everything from visual arts to music, coding and animation, typically experienced at home over the course of 10 hours or more. This makes them a fascinating subject for design critics and curators, but it also means that they do not adapt well to a museum setting. The soul of games – the thing that gives them their power – is interactivity, the chance to be a participant, rather than an observer. This is the very thing that’s taken away when they are placed in a museum, where they can be seen and read about – but not played. Places like Berlin’s Computerspielemuseum and exhibitions like the Barbican’s Game On have focused on video games’ history as a technology: arcade cabinets and old computers give way to sleek-looking modern consoles, as the displayed works progress from lines and dots to pixel sprites to polygonal 3D models to realistic characters in beautifully-rendered worlds.