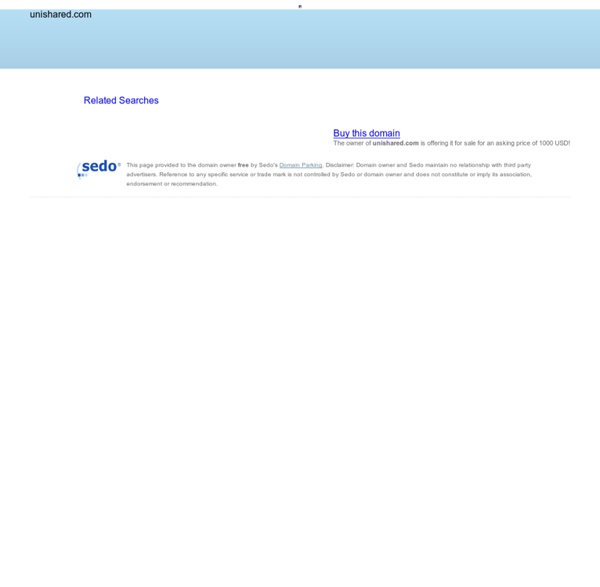 Former Bing Product Lead: Why Personalized Social Search Is Unrealistic (For Now) The future of search is social. Google and Microsoft have tied their rival engines to social, mining data from various networks (Twitter, Facebook) to deliver personalized results based on what your friends and followers recommend, rather than some lifeless algorithm. Google even launched its own social network, Google+, for this end. But according to former Bing product lead Mark Johnson, now the CEO of Zite, the $17 billion search industry is still a far way off from becoming social.

Graphity - Diagram Editor Graphity is a diagram editor that can be used to quickly and effectively generate drawings and to apply automatic layouts to a range of different diagrams and networks like: FlowchartsSocial networksComputer networksUML diagramsBusiness process modeling diagrams Graphity is an application for the Adobe® Flash® Player. We must avoid a new wrong turn of cooperativism: the strategic danger of collaborative ‘consumption’ Natalia Fernandez of Lasindias.net argues: By severing cooperativism from its communal origins and and focusing on consumption, British cooperativism and the ICA caused lasting damage to the transformative capacity of cooperativism, which we should not repeat today in the debate between the economy of the commons and collaborative consumption. She explains why (please note the original article has many links):

29 Incredibly Useful Websites You Wish You Knew Earlier There are so many wonderful websites around, and it is difficult to know each and every one of them. The below list provides some of those websites that I find particularly helpful, even though they are not as famous or as prevalent as some of the big names out there. 1. BugMeNot Are you bugged constantly to sign up for websites, even though you do not wish to share your email? Twitter as a tool for learningScoop Social media often gets a bad rap for being a driving force behind people falling out of touch, neglecting in-person relationships, and reducing productivity for people around the world. Naysayers blame it for shorter attention spans and proliferation of bad grammar, and the most vehement of those naysayers believe that social media has led to privacy being a thing of the past. To be fair, there have been many times where I’ve been trolling my Twitter feed only to be thoroughly horrified by TMI moments and tHingz Speld lIKE THIZ. But if you look past the rough surface Twitter can sometimes present, you find an amazing tool for learning. Last time I looked, there were 141.8 million twitter accounts in the USA alone, and there are 175 million tweets being published every day. Twitter is a global community, which means global perspective and opinions about the topics you care about, and outside perspective is good.

The Revolution at Hand La Liberté guidant le peuple is a painting by Eugène Delacroix commemorating the July Revolution of 1830 “Economists and theorists of innovation such as Jeremy Rifkin, Yochai Benkler, Michel Bauwens, and several others have concluded that the Third Industrial Revolution is at hand” are the opening words of a newly published survey by Statistical Studies of Peer Production. It is indeed difficult not to note the success and increasing visibility of peer production — the decentralized alternative to large-scale industrial production first theorized in 2006 by Professor Yochai Benkler in his seminal book The Wealth of Networks — on the network scene and in factual reality. The Economist has dedicated an entire report to the phenomenon. News: Technologically Illiterate Students ORLANDO -- Say you are an employer evaluating college students for a job. Perusing one candidate’s Facebook profile, you notice the student belongs to a group called “I Pee My Pants When I’m Drunk.” What is your first thought?

Social Learning Theory: Understanding Bandura's Theory of Learning What is Social Learning Theory? The social learning theory proposed by Albert Bandura has become perhaps the most influential theory of learning and development. While rooted in many of the basic concepts of traditional learning theory, Bandura believed that direct reinforcement could not account for all types of learning. 50 Best Websites 2014 10 Minute Mail In case its name didn't give it away, 10 Minute Mail sets you up with a self-destructing email address that expires in -- you guessed it -- 10 minutes. Your temporary inbox works just like regular email, allowing you to forward and respond to messages, and you can add extra time if 10 minutes isn't quite long enough.

Stories Abenteuer unter WasserΠεριπέτεια στο βυθό, μία ιστορία για τα μικρά ψάρια από μικρά παιδιάDafni Papanikolaou The dying art of pottery in Vellore, IndiaPotters in a village in Vellore district of India are bearing the brunt of modernisation and rising raw material costs.Abhaya Joshi Christmas cardsDecember activity - eTwinning project: Digital storytelling Rositsa Mineva December activityproject work; 'Wear the Peace - make a T-shirt'Rositsa Mineva The Best Star Story Ever!(It is truly the best you will ever read!) From Airbnb to TaskRabbit to Zimride, sharing is becoming big business The nation is in a sharing mood — and start-ups are capitalizing on it. Americans with heaps of stuff, skills and time are connecting online with tech-savvy and early adopters eager to share and rent homes, cars, tools and services in exchange for deep savings. Dubbed "collaborative consumption" — or "the sharing economy" — this movement represents the newly cemented intersection of online social networking, mobile technology, the minimalist movement and heightened penny-pinching brought on by lingering economic uncertainties. Adam Hertz, a cable company executive in San Francisco, and his wife, Joan, have enthusiastically embraced the movement.