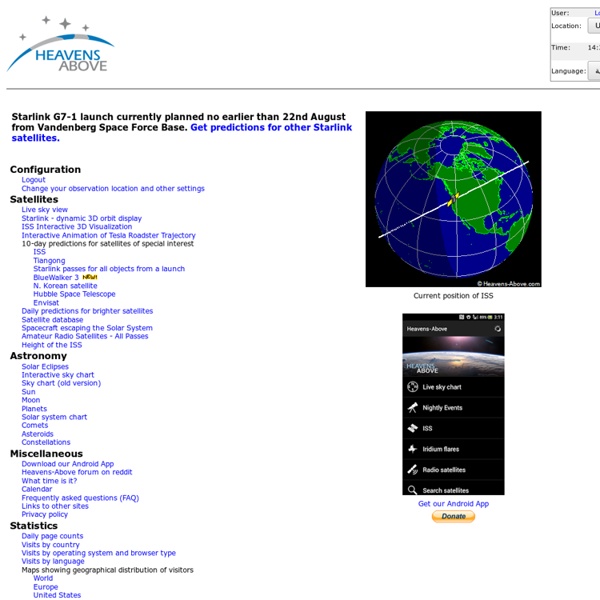 Sub-solar and sub-lunar points. Current zenith locations. Not small-screen optimized, but you should be able to scroll sideways. The Map The sub solar point is the yellow marker. The blue one is the ”sub lunar” point. When you are at these locations, you will have the Sun/Moon directly over your head. Global Hands-On Universe: Software SalsaJ is free, student-friendly software developed specifically for the EU-HOU project. SalsaJ is designed to be easy to install and use. It allows students to display, analyse, and explore real astronomical images and other data in the same way that professional astronomers do, making the same kind of discoveries that lead to true excitement about science. A number of exercises have developed complete with data to download and detailed instructions for use. The flexibility of the SalsaJ tool enables students and teachers to extend the exercises with their own observations.

Near Earth Objects Near-Earth Objects (NEOs) are comets and asteroids that have been nudged by the gravitational attraction of nearby planets into orbits that allow them to enter the Earth's neighborhood. Composed mostly of water ice with embedded dust particles, comets originally formed in the cold outer planetary system while most of the rocky asteroids formed in the warmer inner solar system between the orbits of Mars and Jupiter. The scientific interest in comets and asteroids is due largely to their status as the relatively unchanged remnant debris from the solar system formation process some 4.6 billion years ago. The giant outer planets (Jupiter, Saturn, Uranus, and Neptune) formed from an agglomeration of billions of comets and the left over bits and pieces from this formation process are the comets we see today.

All in a good cause How can you drink, clothe, accessorise and feed yourself while helping others? The answer is becoming easier in Melbourne, as a surge of social enterprises, organisations that provide services in return for a community benefit rather than private profit, take prime position on its streets. From fine dining to a quick latte, your dollar can go way further than you thought: for instance, to help folk in Ghana, or closer, such as giving a local homeless youngster a future.

VO Solar System Portal The IMCCE is a research institute of the Paris Observatory of Paris, associated with the CNRS (UMR8028), whose work concerns mainly the dynamic and planetologic studies of the bodies of the solar system and of the terrestrial environment: planets, natural satellites, asteroids, comets and meteoroids. For this reason, IMCCE has the ambition to place at the disposal of the Virtual observatory its knowledge and its expertise concerning the dynamics and the physics of the bodies of the solar system through databases, ephemeris computation services, tools of simulation, and numerical computation services fully compliant with the interoperability concept of the Virtual Observatory. The first stage of VO-IMCCE project consisted, in 2003, to carry out an interconnection between VizieR (CDS) and the IMCCE service of calculation of ephemerides for the asteroids. In 2004, we began the development of tools and services in the framework of the Virtual Observatory.

Sun for All Project download poster The project “Sun for all”, funded by Ciência Viva (2005 117/ 18) aims to promote science in general and astronomy in particular, among students. The project rests on the asset of over 30000 Sun images (spectroheliograms) that are kept in the Astronomical Observatory of the University of Coimbra, as a result of a work of over 80 years of daily solar observations that started in 1926. Presently there are about 15000 digitised images that are available to the general public due to another project, also funded by “Ciência Viva”, which was developed from 2002 to 2004.

Advanced Composition Explorer (ACE) Home Page Advanced Composition Explorer (ACE) Meetings/Workshops Latest 4-day Browse Plot ACE in the News Mission Overview | Science Center | Public Outreach | Science News | Publications | Online DataPersonnel | Picture Gallery | Other Links | ACE Guest Investigators Luxury Treehouse Provides Ultimate Comfort in Nature Located about 4 hours northwest of Toronto, Canada, eco-friendly five-star resort E’terra Samara invites you to "escape the city lights for starry nights in the magical crispness of the Bruce Peninsula." The already inviting Canadian travel destination will soon add a series of 12 environmentally-friendly treehouse villas that will provide visitors with extreme luxury in the form of a futuristic design. The concept, developed by Farrow Partnership Architects, is designed to blend naturally into the surrounding land and to overlook the Georgian Bay. The pods will be built off-site, in three sections, out of locally harvested wood and then installed with a steel base and cable system that surrounds, but does not harm, each tree trunk. Farrow states, "The structure is designed to be suspended from the tree's trunk, rather than following the common practice of nailing to the tree, thereby hugging the tree rather than piercing its flesh.”