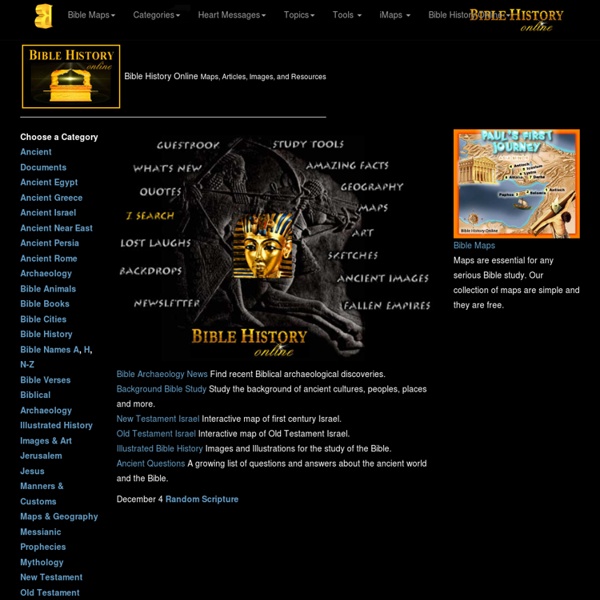 Syncretism Syncretism /ˈsɪŋkrətɪzəm/ is the combining of different, often seemingly contradictory beliefs, while melding practices of various schools of thought. Syncretism involves the merger and analogizing of several originally discrete traditions, especially in the theology and mythology of religion, thus asserting an underlying unity and allowing for an inclusive approach to other faiths. Syncretism also occurs commonly in expressions of arts and culture (known as eclecticism) as well as politics (syncretic politics). Nomenclature, orthography, and etymology[edit] The Oxford English Dictionary first attests the word syncretism in English in 1618. It derives from modern Latin syncretismus, drawing on Greek συγκρητισμός (synkretismos), meaning "Cretan federation".

Ancient Evidence for Jesus from Non-Christian Sources Evidence from Tacitus Although there is overwhelming evidence that the New Testament is an accurate and trustworthy historical document, many people are still reluctant to believe what it says unless there is also some independent, non-biblical testimony that corroborates its statements. In the introduction to one of his books, F.F. Bruce tells about a Christian correspondent who was told by an agnostic friend that "apart from obscure references in Josephus and the like," there was no historical evidence for the life of Jesus outside the Bible.{1} This, he wrote to Bruce, had caused him "great concern and some little upset in [his] spiritual life.

God’s Perfect Gift - Resources - Setting Captives Free "Every good gift and every perfect gift is from above, coming down from the Father of lights with whom there is no variation or shadow due to change."(James 1:17, ESV throughout) We've been blessed. Hidden Artifacts! (pics) Here is a slide 45 minute presentation by Klaus Dona interviewed by Bill Ryan. It must have over 100 slides of artifacts and other anomalies so I highly reccomend it, he doesnt have time to go real in depth with each one but most of these are simply not known about, and one would have to know what to look for to find these anomalies. I chose a couple to share for the Op, 13 step pyramid, like on the U.S dollar bill, found in equador Under the blacklight it glows, on the base presanskrit was found, it was called that because experts say it is older than the oldest writing known.

Bart Ehrman Answered Bart Ehrman is perhaps the most influential skeptical New Testament scholar in North America. Several of Ehrman's books have become standard textbooks in many universities. His skepticism is not well-founded, however. This interview features New Testament scholar Mike Licona who answers a number of Ehrman's major contentions. Stream and download options. Also included is a document with discussion questions for group leaders to be used in tandem with the individual segments.

The Resurrection: What is the evidence? The Resurrection: What is the Evidence? If you were the judge presiding over murder case, you would want to be absolutely certain before convicting the defendant. If the prosecutor calls his key witnesses, but each tells a different story, his case would be very shaky. Two Legendary Solvay Conferences: 1911 and 1927 Ernest Solvay (1838-1922) was a Belgian chemist and industrialist whose patents brought him considerable wealth, which he used to bankroll several philanthropic endeavors. In 1894 he founded a sociology institute at the University of Brussels, called "Institut des Sciences Sociales" (ISS). In 1903, he founded the Solvay Business School, also at the University of Brussels. Finally, in 1911, he established the prestigious meetings of top scientists known as Solvay Conferences. The first and the fifth of these (1911 and 1927) are particularly noteworthy, as they helped define the foundations for the first and second incarnations of quantum theory. The First Solvay Conference (1911)

7 Reasons to Memorize Scripture There are few spiritual disciplines more rewarding than memorizing Bible passages. Here are a few: For fellowship with God The way God chiefly communicates with us today is through His written Word. The Ancient Chinese Libertarian Tradition - Murray N. Rothbard The first libertarian intellectual was Lao-tzu, the founder of Taoism. Little is known about his life, but apparently he was a personal acquaintance of Confucius in the late sixth century BC and like the latter came from the state of Sung and was descended from the lower aristocracy of the Yin dynasty. Unlike the notable apologist for the rule of philosopher-bureaucrats, however, Lao-tzu developed a radical libertarian creed.

atenorforJESUS Most people think that if these discoveries were legitimate then surely they would have hit the major news networks. However, if we remember, there is an angel by the name of satan who is the god of this world and the lord of the companies that run the media. The discoveries have from time to time been on the news but soon God will overrule and the message will cover the whole earth in days.