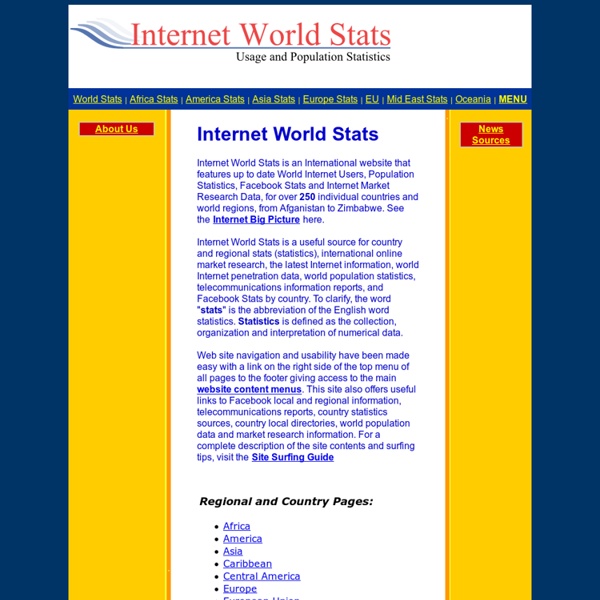 SYR Handel Aleppotvål Med 8% Lagerolja - Glimja.se Who we are Our website address is: What personal data we collect and why we collect it Comments When visitors leave comments on the site we collect the data shown in the comments form, and also the visitor’s IP address and browser user agent string to help spam detection. An anonymized string created from your email address (also called a hash) may be provided to the Gravatar service to see if you are using it. Learning From Data - Online Course (MOOC) A real Caltech course, not a watered-down version on YouTube & iTunes Free, introductory Machine Learning online course (MOOC) Taught by Caltech Professor Yaser Abu-Mostafa [article]Lectures recorded from a live broadcast, including Q&APrerequisites: Basic probability, matrices, and calculus8 homework sets and a final examDiscussion forum for participantsTopic-by-topic video library for easy review

Top Ten Internet Languages - World Internet Statistics Tallying the number of speakers of the world's languages is an increasingly complex task, particularly with the push in many countries to teach English in their public schools. How many people can actually use the global language? David Graddol estimated a total of 750 million L1 (first or native language) plus L2 (second or nth language) speakers of English in his Future of English Report (pdf document) for the British Council. One of our subscribers, Prof. Martin Schell, has reviewed Prof.

M-Lab M-Lab provides the largest collection of open Internet performance data on the planet. When an Internet application doesn't work as expected, how can you tell whether the problem is caused by your connection, the application or something else? It can be very difficult for professional network administrators, let alone average Internet users, to answer this sort of question today. Transparency has always been an essential component of the Internet's success, and Internet users deserve to be well-informed about the performance of their broadband connections.

Gary's Social Media Count Click for App Store Page Original Counter and Post from 24 Sep 2009! June 2013 ‘Social’ Update (mobile, games & heritage to come) June 2012 ‘Social’ Update August 2011 Update ABOUT Living statistics - Many of us who have been following social media since the early 90s are very sensitive to today’s exponential growth in usage of the sharing web. Bitcoin (BTC) surge renews worries about its massive carbon footprint Cryptocurrency mining rigs at a crypto mining farm in Romania. Akos Stiller | Bloomberg via Getty Images LONDON — Bitcoin’s price isn’t the only thing surging lately — the amount of electricity it consumes is also on the rise. The cryptocurrency has for years alarmed experts due to the sheer level of energy required by so-called miners, which release new coins into circulation.

STHDA - Home Linear Regression Essentials in R Linear regression (or linear model) is used to predict a quantitative outcome variable (y) on the basis of one or mult... Interaction Effect in Multiple Regression: Essentials This chapter describes how to compute multiple linear regression with interaction effects. Who’s Not Online and Why By Kathryn Zickuhr 15% of American adults do not use the internet at all, and another 9% of adults use the internet but not at home. As of May 2013, 15% of American adults ages 18 and older do not use the internet or email. Asked why they do not use the internet: 34% of non-internet users think the internet is just not relevant to them, saying they are not interested, do not want to use it, or have no need for it. 32% of non-internet users cite reasons tied to their sense that the internet is not very easy to use. These non-users say it is difficult or frustrating to go online, they are physically unable, or they are worried about other issues such as spam, spyware, and hackers.

realitymining brought to you by the MIT Human Dynamics Lab This dataset was collected in 2004 by Nathan Eagle and Alex Pentland. The citation for this data set is: The goal of this experiment was to explore the capabilities of the smart phones that enabled social scientists to investigate human interactions beyond the traditional survey based methodology or the traditional simulation base methodology.

Social Media, Web 2.0 And Internet Stats - Flock As our digital and physical lives blur further, the internet has become the information hub where people spend a majority of their time learning, playing and communicating with others globally. Digital marketing professionals understand this, but most outside the industry don’t realize just how staggering the numbers are of people collaborating, researching, and interacting on the web. I thought it might be fun to take a step back and look at some interesting/amazing social media, Web 2.0, crowdsourcing and internet statistics. Academic Journals and Research Community Our journals are led and peer-reviewed by editorial boards of over 100,000 top researchers. Covering more than 900 academic disciplines, we are one of the largest and highest-cited publishers in the world. To date, our freely accessible research articles have received over 1 billion views and downloads and 1.6 million citations. We strive to continuously empower the academic community with innovative solutions that improve how science is published, evaluated and communicated to researchers, innovators and the public. Our mission is to make science open.

Data Mining: Practical Machine Learning Tools and Techniques Machine learning provides practical tools for analyzing data and making predictions but also powers the latest advances in artificial intelligence. Our book provides a highly accessible introduction to the area and also caters for readers who want to delve into modern probabilistic modeling and deep learning approaches. Chris Pal has joined Ian Witten, Eibe Frank, and Mark Hall for the fourth edition of the book, and his expertise in these techniques has greatly extended its coverage. The book's online appendix provides a reference for the Weka software. SlidesTable of Contents "If you have data that you want to analyze and understand, this book and the associated Weka toolkit are an excellent way to start.

Launching low bandwidth (loband) V1 and new IDE view! - Inside MSDN and TechNet This is the one we've been talking about. It's a minimal view, focused on one thing, speed. PDA - (pda) The best view for phones or PDAs. Turns off the left side navigation and makes the page 100% width and flexible. Observatorio de Internet - National Institute for Consumer Protection About The 'Observatorio de Internet' emerges as an initiative from the Spanish Agency for Consumer Affairs, Food Safety and Nutrition to protect online consumers. We deal with the need to support the consumer, fight fraud and encourage responsible consumption on the Net. The 'Observatorio de Internet' was created to fulfil the work entrusted to the Spanish Agency for Consumer Affairs, Food Safety and Nutrition in the Internet field. There are three aspects that are essential to the smooth running of the consumption through Internet: confidence, security and education.