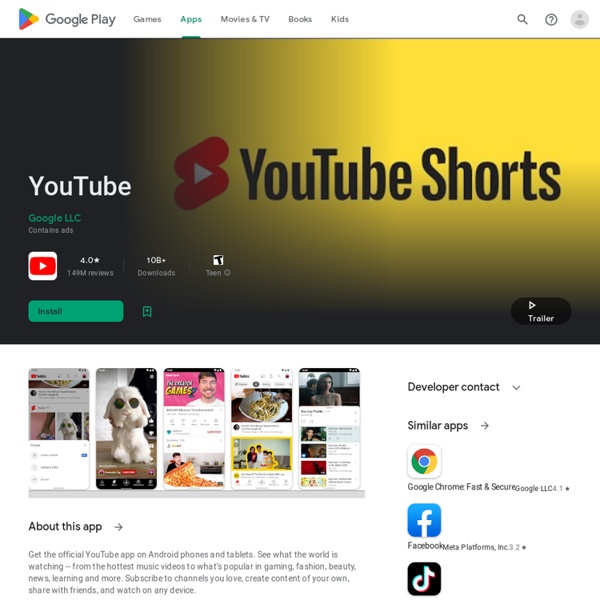 Get the official YouTube app for Android phones and tablets. See what the world is watching -- from the hottest music videos to what’s trending in gaming, entertainment, news, and more. Subscribe to channels you love, share with friends, and watch on any device. With a new design, you can have fun exploring videos you love more easily and quickly than before. Just tap an icon or swipe to switch between recommended videos, your subscriptions, or your account. You can also subscribe to your favorite channels, create playlists, edit and upload videos, express yourself with comments or shares, cast a video to your TV, and more – all from inside the app. • Browse personal recommendations on the Home tab • See the latest from your favorite channels on the Subscriptions tab • Look up videos you’ve watched and liked on the Account tab • Let people know how you feel with likes, comments, and shares • Upload and edit your own videos with filters and music – all inside the app

JAMA Network™ Building on the editorial excellence of JAMA®, the Journal of the American Medical Association, JAMA Network Open™ and the 11 JAMA Network™ specialty journals offer enhanced access to the research, reviews and perspectives shaping medicine today and into the future. Through a variety of innovative tools, the JAMA Network™ provides the insights that matter most to medical research and practice. For medical students, residents and fellows AMA members can access JAMA and the JAMA Network journals for free

The Beginner’s Guide to Google Forms Are you just getting started with Google Forms? Never heard of it before? Either way, here are some tips to help you get going with Google’s powerful form tool and start building surveys and forms online for free. What the Heck Is Google Forms? If you already know about Google Forms, feel free to skip ahead. Pandora® internet radio Pandora gives you a personalized music experience that continually evolves with your tastes. Create stations from your favorite songs, artists or genres. Or search browse to find recommended stations for your mood or activity. Looking for more? Google Hangouts Google Hangouts is a communication software product developed by Google. Originally a feature of Google+, Hangouts became a standalone product in 2013, when Google also began integrating features from Google+ Messenger and Google Talk into Hangouts. In 2017, Google began developing Hangouts into a product aimed at enterprise communication. Hangouts is now part of the G Suite line of products and consists of two primary products: Google Hangouts Meet and Google Hangouts Chat.[7] Google has also begun integrating features of Google Voice, its IP telephony product, into Hangouts, stating that Hangouts is designed to be "the future" of Voice. Google will shut down the consumer version of Hangouts in June 2020.[8] History[edit]

Awesome Eats What is it Awesome eats is an app which involves sorting healthy food- There are food facts and tips added along the way. Children have to complete a range of tasks involving heathy ingredients, against the clock. The challenges start simple, sorting 1 vegetable, and then get more challenging – sorting a range of ingredients onto the correct conveyor belt in a set time! Symbaloo - Apps on Google Play With Symbaloo you surf with one click to all of your favorite websites. Symbaloo is an easy to use app and best of all, it’s free. With Symbaloo you have all of your favorite websites at your fingertips, anywhere and always.

Audacity Audacity provides you with a full set of tools that you can use to edit audio files and add effects through a clear and accessible interface. Users of all experience levels will benefit from this app's intuitive interface and nice list of features. Pros Excellent resources: Despite the clarity of the interface, it can take some time to learn your way around this program. Fortunately, the app comes with links to a large collection of different types of resources to help you learn how to use all of its features. There is a Quick Help Guide, a full Manual, a Wiki, and user Forums where you can ask questions and get feedback from other users. The Sims™ FreePlay Miracle City is a fantastic city building game. By growing crops, building houses, and mining, you gain money and energy to develop your city. Decorations will please your citizens and so to make them work harder and more efficiently.