From Circe to Clinton: why powerful women are cast as witches 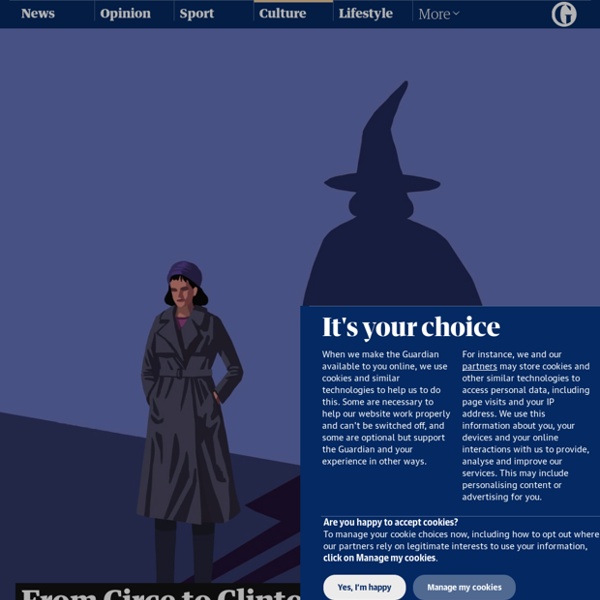 During the 2016 US presidential election, American social media was flooded with images of Hillary Clinton wearing a black hat and riding a broom, or else cackling with green skin. Her opponents named her The Wicked Witch of the Left, claimed they had sources testifying that she smelled of sulphur, and took particular delight in depictions of her being melted. Given that the last witch trial in the US was more than 100 hundred years ago, what are we to make of this? In the late 19th century, the suffragette Matilda Joslyn Gage asserted something revolutionary. The persecution of witches, she said, had nothing to do with fighting evil or resisting the devil. It was simply entrenched social misogyny, the goal of which was to repress the intellect of women. Obviously, she was on to something. A better parallel to “witch” is the word “whore”. Let’s start with the classic: the evil, aged crone. The most famous of this type must be Shakespeare’s weird sisters from Macbeth.

Related:  Thoughts • Another View • Other Side of the Sky • The Truth Behind "Witch Hunts"

For Years, Anita Hill Was A 'Canary In The Coal Mine' For Women Speaking Out Anita Hill testifies before the Senate Judiciary Committee on Oct. 11, 1991, regarding Clarence Thomas' confirmation to the Supreme Court. AP hide caption toggle caption The backwards history of attitudes toward public breastfeeding Breastfeeding in public is the controversy that never seems to die. A recent YouTube video that went viral shows a woman breastfeeding in public. One passerby tells her “not to do that in public”; another that being in “a decent place” – a bus stop, in this case – means not breastfeeding there. Several others call her “disgusting.”

Why Are Women Accused of Witchcraft? The following essay is reprinted with permission from The Conversation, an online publication covering the latest research. From medieval witch hunts in Europe to contemporary “witch doctors” in Tanzania, belief in witchcraft has existed across human societies throughout history. Anthropologists have long been fascinated by the phenomenon, but have struggled to study it with quantitative methods—our understanding of how and why it arises is therefore poor. But a study we conducted of one Chinese region provided an opportunity to test the most common hypothesis—that witchcraft accusations act as punishment for those who do not cooperate with local norms. According to this theory, witch tags mark supposedly untrustworthy individuals and encourage others to conform out of fear of being labelled. However, some empirical studies have shown that witch labelling instead undermines trust and social cohesion in a society.

A 17th-century, accused witch inspired Margaret Atwood's 'The Handmaid's Tale' When Margaret Atwood wrote "The Handmaid's Tale," published in 1985, she took inspiration from the rise of the Christian right in America during the 1970s and early '80s and the 1979 Islamic Revolution in Iran. But another, much older source of inspiration for Atwood was the story of a real-life woman in 17th-century New England named Mary Webster, who may or may not have been related to Atwood. “Some days, my grandmother would say we were related to her and on other days, she would deny the whole thing because it wasn't very respectable,” Atwood says. “I was actually trying to write a novel about her, but, unfortunately, I didn't know enough about the late 17th century to be able to do it. But I did write a long, narrative poem called 'Half-Hanged Mary,' because she only got half hanged.”

Macron condemned the rise of nationalism in front of Trump and Putin, warning that 'old demons are reawakening' PARIS (Reuters) - French President Emmanuel Macron used an address to world leaders gathered in Paris for Armistice commemorations on Sunday to send a stern message about the dangers of nationalism, calling it a betrayal of moral values. With US President Donald Trump and Russian President Vladimir Putin sitting just a few feet away listening to the speech via translation earpieces, Macron denounced those who evoke nationalist sentiment to disadvantage others. "Patriotism is the exact opposite of nationalism: nationalism is a betrayal of patriotism," Macron said in a 20-minute address delivered from under the Arc de Triomphe to mark the 100th anniversary of the end of World War One.

Social media is protecting men from periods, breast milk and body hair There’s a predictable social media formula for what women’s pictures online should look like. Breasts in barely-there bikinis are good (thumbs-up emoji, even), but breasts with babies attached them are questionable. Women wearing next to nothing is commonplace, but if you’re over a size 10 your account may be banned. Most witches are women, because witch hunts were all about persecuting the powerless “Witch hunt” – it’s a refrain used to deride everything from impeachment inquiries and sexual assault investigations to allegations of corruption. When powerful men cry witch, they’re generally not talking about green-faced women wearing pointy hats. They are, presumably, referring to the Salem witch trials, when 19 people in 17th-century Massachusetts were executed on charges of witchcraft. Using “witch hunt” to decry purportedly baseless allegations, however, reflects a misunderstanding of American history. Witch trials didn’t target the powerful. They persecuted society’s most marginal members – particularly women.

Modern society still fears witches Inevitably this Halloween, among the pint-size ghosts, pirates, princesses and vampires, and the trendy Pocahontases and Power Rangers, there will be a pointy black hat. Perhaps offset by a carefully applied green wart or two and accompanied by an ordinary household broom, the hat calls forth one word: Witch.