'Dying is not as bad as you think' - BBC Ideas 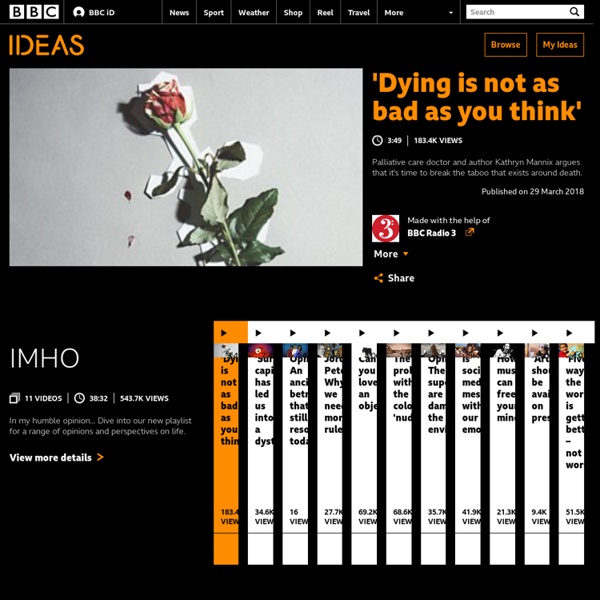 To treat or not to treat: find out what really matters to the patient “What do you want?” “Whatever you say, doctor.” “It would be helpful for me to know about your goals in life.” “Goals?” He is nonplussed. There's No Scientific Basis for Race—It's a Made-Up Label This story is part of The Race Issue, a special issue of National Geographic that explores how race defines, separates, and unites us. In the first half of the 19th century, one of America’s most prominent scientists was a doctor named Samuel Morton. Morton lived in Philadelphia, and he collected skulls. He wasn’t choosy about his suppliers. He accepted skulls scavenged from battlefields and snatched from catacombs.

Assessment of Self-reported Prognostic Expectations of People Undergoing Dialysis: United States Renal Data System Study of Treatment Preferences (USTATE) Key Points Question What are the prognostic expectations of people undergoing dialysis, and how do these relate to their treatment goals and preferences? Findings In this cross-sectional survey study of 996 patients receiving maintenance dialysis at nonprofit facilities in 2 US metropolitan areas, most of the respondents were either uncertain about prognosis or had a prognostic expectation of more than 10 years. In adjusted analyses, these groups were less likely than those with a prognostic expectation of fewer than 5 years to report having documented their treatment preferences and to value comfort over life extension, and more likely to want cardiopulmonary resuscitation and mechanical ventilation.

Climate change will displace millions Wildfires tearing across Southern California have forced thousands of residents to evacuate from their homes. Even more people fled ahead of the hurricanes that slammed into Texas and Florida earlier this year, jamming highways and filling hotels. A viral social media post showed a flight-radar picture of people trying to escape Florida and posed a provocative question: What if the adjoining states were countries and didn’t grant escaping migrants refuge? Think Confederate monuments are racist? Consider pioneer monuments In San Francisco, there is an an 800-ton monument that retells California history, from the Spanish missions to American settlement. Several bronze sculptures and relief plaques depict American Indians, white miners, missionaries and settlers. A female figure symbolizing white culture stands atop a massive stone pillar.

Admitting Elderly Patients to the Intensive Care Unit—Is it the Right Decision? One of the most important decisions that a physician makes is whether to admit a patient to the intensive care unit (ICU). The modern ICU provides a capacity for advanced monitoring and life support that is typically unavailable elsewhere in the hospital and is lifesaving for patients with a wide array of acute deteriorations in health. However, ICU care is also one of the most expensive, intensive, and intrusive endeavors in health care. Although patients admitted to the ICU account for approximately one-quarter of hospitalized patients, they account for half of total hospital expenditures in the United States, with costs estimated at $110 to $260 billion per year or approximately 1% of the gross domestic product.1-3 Furthermore, ICU care can be unnecessary, harmful, or futile. Importantly, the provision of ICU services is increasing.

Climate change: 'Hothouse Earth' risks even if CO2 emissions slashed Image copyright Getty Images It may sound like the title of a low budget sci-fi movie, but for planetary scientists, "Hothouse Earth" is a deadly serious concept. Researchers believe we could soon cross a threshold leading to boiling hot temperatures and towering seas in the centuries to come. Even if countries succeed in meeting their CO2 targets, we could still lurch on to this "irreversible pathway". Their study shows it could happen if global temperatures rise by 2C. An international team of climate researchers, writing in the journal, Proceedings of the National Academy of Sciences, says the warming expected in the next few decades could turn some of the Earth's natural forces - that currently protect us - into our enemies.

Humanity has wiped out 60% of animals since 1970, major report finds Humanity has wiped out 60% of mammals, birds, fish and reptiles since 1970, leading the world’s foremost experts to warn that the annihilation of wildlife is now an emergency that threatens civilisation. The new estimate of the massacre of wildlife is made in a major report produced by WWF and involving 59 scientists from across the globe. It finds that the vast and growing consumption of food and resources by the global population is destroying the web of life, billions of years in the making, upon which human society ultimately depends for clean air, water and everything else.