This is all the data Facebook and Google have on you 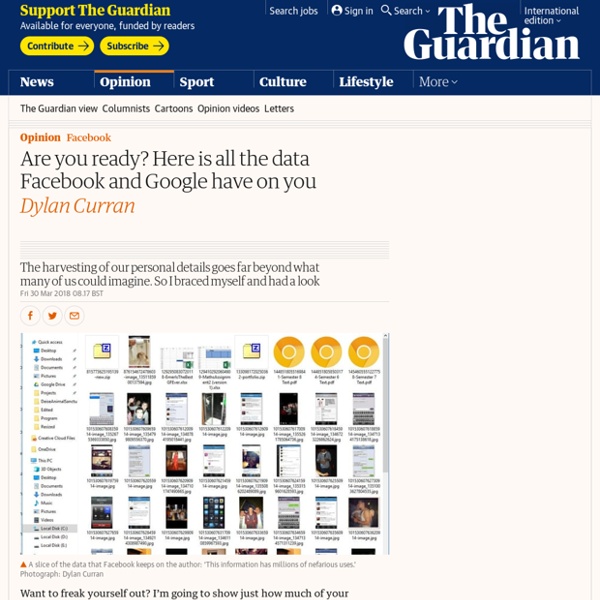 Want to freak yourself out? I’m going to show just how much of your information the likes of Facebook and Google store about you without you even realising it. Google knows where you’ve been Google stores your location (if you have location tracking turned on) every time you turn on your phone. You can see a timeline of where you’ve been from the very first day you started using Google on your phone. Click on this link to see your own data: google.com/maps/timeline? Here is every place I have been in the last 12 months in Ireland. Google knows everything you’ve ever searched – and deleted Google stores search history across all your devices. Click on this link to see your own data: myactivity.google.com/myactivity Google has an advertisement profile of you Google creates an advertisement profile based on your information, including your location, gender, age, hobbies, career, interests, relationship status, possible weight (need to lose 10lb in one day?) Google knows all the apps you use

Google says hackers steal almost 250,000 web logins each week Looking at cybercriminal black markets and public forums, the company found millions of usernames and passwords stolen directly through hacking. It also uncovered billions usernames and passwords indirectly exposed in third-party data breaches. For one year, Google researchers investigated the different ways hackers steal personal information and take over Google (GOOG) accounts. Google published its research, conducted between March 2016 and March 2017, on Thursday. How To Use Google For Hacking Google serves almost 80 percent of all search queries on the Internet, proving itself as the most popular search engine. However Google makes it possible to reach not only the publicly available information resources, but also gives access to some of the most confidential information that should never have been revealed. In this post I will show how to use Google for exploiting security vulnerabilities within websites.

A new way of blogging about Common Lisp This blog post is about to show a new way of blogging about Common Lisp. Look at a typical blog post or tutorial about any programming language: The article usually presents a couple of code snippets. As I see it, there are two pains with code snippets: they contain the input and the output but not the actual evaluation of the input it’s impossible for the reader to modify the output How Britain changed under Margaret Thatcher. In 15 charts What is the the legacy of Margaret Thatcher, who died today? The 1980s is increasingly being seen as deep history - 50% of the Datablog team were born in the late 1980s and were just toddling into school when she resigned in November 1990. If the past is a foreign country (they do things differently there), there is nowhere more foreign than May 1979, when the Conservatives entered Downing Street. In fact, it's getting increasingly difficult to tell - many of the datasets we rely on now weren't compiled until the early 1990s. So what kind of Britain did the country's first woman prime minister come to rule in 1979 - and how has it changed?

Girl starved to death while parents raised virtual child in online game South Korean police have arrested a couple for starving their three-month-old daughter to death while they devoted hours to playing a computer game that involved raising a virtual character of a young girl. The 41-year-old man and 25-year-old woman, who met through a chat website, reportedly left their infant unattended while they went to internet cafes. They only occasionally dropped by to feed her powdered milk. "I am sorry for what I did and hope that my daughter does not suffer any more in heaven," the husband is quoted as saying on the asiaone website. According to the Yonhap news agency, South Korean police said the couple had become obsessed with raising a virtual girl called Anima in the popular role-playing game Prius Online.

Europe Code Week Here you can find free training materials & resources that will help you get started and plan your next innovative lesson. 1. Learning Bits Steps to Becoming a Veterinarian — Veterinary and Biomedical Sciences Major — Penn State University There are 30 veterinary schools accredited by the American Veterinary Medical Association (AVMA) in the U.S. There were nearly 6,800 applicants competing for approximately 2,700 openings in 2013. In other words, it is very competitive to gain admission to a veterinary school.

theconversation The recent killing of unarmed Palestinians by Israeli forces has sparked not only a reasonable outcry, but commentary on the language journalists use to report these events. For instance, writer and English professor Moustafa Bayoumi, of City University of New York, wrote: It is the peculiar fate of oppressed people everywhere that when they are killed, they are killed twice: first by bullet or bomb, and next by the language used to describe their deaths. South Korean dies after games session A South Korean man has died after reportedly playing an online computer game for 50 hours with few breaks. The 28-year-old man collapsed after playing the game Starcraft at an internet cafe in the city of Taegu, according to South Korean authorities. The man had not slept properly, and had eaten very little during his marathon session, said police. Multi-player gaming in South Korea is extremely popular thanks to its fast and widespread broadband network. Games are televised and professional players are treated, as well as paid, like sports stars.

4 Apps for Teaching Students Coding Skills Why should we learn coding? All technology that is used in the world has code as the driving force. Students are more engrossed in technology than ever. They’re active on social media or glued to the latest video game. The issue is that our students are simply acting as consumers. How can we transition them to become creators of their own applications? Voodoo Funeral Home A severed hand was discovered washed up on the shore of the Manatee River in Bradenton in November 1997. The Bradenton Police Department fingerprinted the grisly find, and a few months later, the Florida Department of Law Enforcement crime laboratory in Tampa successfully found a match. It was the hand of Willie Suttle of nearby Palmetto.