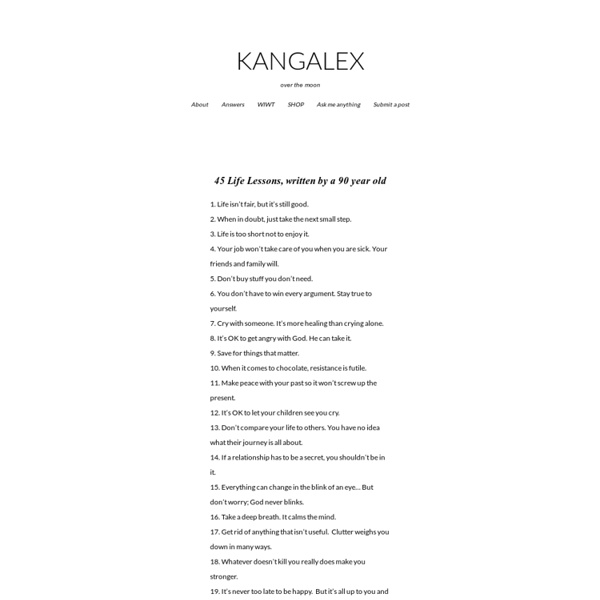 The Salvia divinorum FAQ Level - 2 "A stands for ALTERED perception." Colors and textures are paid attention to. Appreciation of music may be enhanced. Space may appear of greater or lesser depth than is usual. 30 Little Things To Do To Become A Different You In 2016 Are you ready to improve yourself and your life in 2016? Making changes in your life doesn’t have to be totally overwhelming. There are many little things you can do to change your life in big ways. Here are 30 little things you can do to change your life this year. The 12 Ties that Bind Long-Term Relationships That crazy thing we call love is perhaps one of the most studied and least understood areas in psychology. One reason is that many studies of romantic relationships are carried out not in real life, but in the lab. Making matters worse, many of these studies involve dating relationships between samples of convenience, consisting of undergraduate students. Though these students are certainly capable of close relationships, many of them haven’t matured enough to know themselves, much less what they want out of a romantic partner.

FUCKING HOMEPAGE - Useful Websites Here is a list of websites we have featured in the past that might come in handy. Remember to set FuckingHomepage.com as your start page if you haven’t already. Educational/Learning Powers Mandrake The harvest The root of the mandrake resembles a phallus or a human torso, and for this reason was believed to have occult powers. Many weird superstitions collected round the Mandrake root. As early as 93 BC the historian Flavius Josephus described the process of collecting the mandrake, stories of which were embellished over the years. The mandrake was fabled to grow under the gallows of murderers and its anthropological shape evidently was responsible for the superstition that it shrieked when it was uprooted. The demon inhabiting the root would then be aroused and the sounds of its piercing groans of agony would be so horrible that whoever heard it, die or go deaf and insane.

How To Stick To Your Goals, According To Science Each new year brings feelings of hope and change, and for many of us, that means setting new goals. We promise ourselves we’re going to get healthier, be more kind or accomplish more at work. Unfortunately, making these vows is only half the battle — following through on them is an entirely different story. Saudade Saudade (European Portuguese: [sɐwˈðaðɨ], Brazilian Portuguese: [sawˈdadi] or [sawˈdadʒi], Galician: [sawˈðaðe]; plural saudades)[1] is a Portuguese and Galician word that has no direct translation in English. It describes a deep emotional state of nostalgic or profound melancholic longing for an absent something or someone that one loves. Moreover, it often carries a repressed knowledge that the object of longing may never return.[2] A stronger form of saudade may be felt towards people and things whose whereabouts are unknown, such as a lost lover, or a family member who has gone missing. Saudade was once described as "the love that remains" after someone is gone. Saudade is the recollection of feelings, experiences, places or events that once brought excitement, pleasure, well-being, which now triggers the senses and makes one live again. In Brazil, the day of Saudade is officially celebrated on 30 January.[3][4]

Inspirational quotes In From up North’s inspiration galleries we present the latest of our findings from the wonderful world of design. Amazing high quality artworks in various categories from great designers all over the globe. Personality gets the heart – Submitted by Vik West 20 minutes of advice on how to live from Neil Gaiman In some circles, Neil Gaiman has attained near rockstar status. Twenty years ago Gaiman was making the celebrated graphic novel , and was dabbling in longer-form writing. He went on to write amazing books like American Gods, Coraline, and Neverwhere. He was recently asked to give the commencement speech at the University of the Arts in Philadelphia, and the entire 20 minute video is brimming over with good advice.

Review of Galantamine: the Lucid Dreaming Pill So you’re considering the red pill… Galantamine has emerged as THE lucid dreaming pill. This natural supplement has been used for centuries in China as a memory enhancer, and was even noted by the ancient Greeks for its powerful mind-inducing effects. Now we know that galantamine indirectly promotes dreaming sleep as well as lucid dreaming, which is the art of becoming self-aware in your dreams. 12 Motivational Habits To Make You Successful Happy And Productive Your habits are key if you want to be successful. Image Source: Books with benefits Success doesn’t come easily to everyone; it requires hard work, determination, and persistence. But there’s one more thing that contributes to success — habits. TEN UNTRANSLATABLE WORDS - spicyshimmy - Mass Effect FORELSKET The euphoria you experience when you’re first falling in love. Like getting tag-teamed by a one-two shot—cryo round first, incendiary second—that was walking into the same room as Commander Shepard. The experience blew cold and then hot, but after Rahna… Kaidan was used to it, as much as anybody could be. It always moved on to something else, because it wasn’t enough just to change your body temperature, it needed to pierce the skin, too.