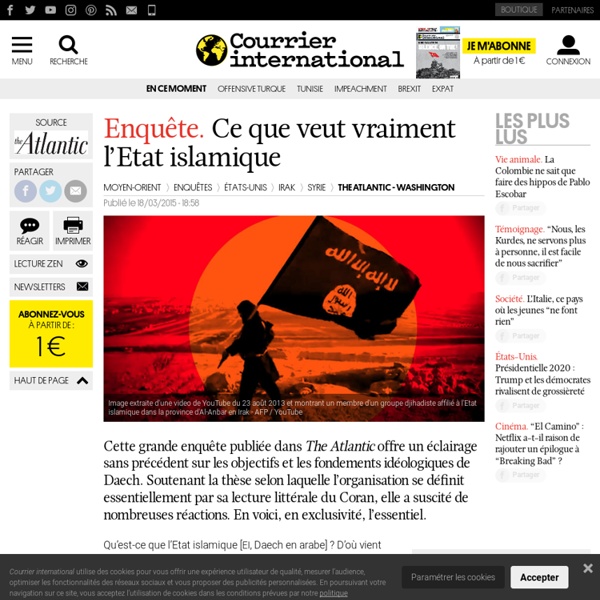 No Piers Morgan. This is how to destroy the Islamic State Yesterday, in the Daily Mail, Piers Morgan wrote about his “uncontrollable rage” at watching the video of the Jordanian pilot, Muaz al-Kasasbeh, being burned alive in a cage by the Islamic State. “If any Muslim remains in any doubt as to whether this is the right time to stand up and cry ‘NOT IN MY NAME OR MY RELIGION!’ then I suggest they too watch the video of Lieutenant al-Kasabeh [sic] being burned alive. He could be YOU. This is YOUR war.” President Obama’s Interview With Jeffrey Goldberg on Syria and Foreign Policy Friday, August 30, 2013, the day the feckless Barack Obama brought to a premature end America’s reign as the world’s sole indispensable superpower—or, alternatively, the day the sagacious Barack Obama peered into the Middle Eastern abyss and stepped back from the consuming void—began with a thundering speech given on Obama’s behalf by his secretary of state, John Kerry, in Washington, D.C. The subject of Kerry’s uncharacteristically Churchillian remarks, delivered in the Treaty Room at the State Department, was the gassing of civilians by the president of Syria, Bashar al-Assad. Obama, in whose Cabinet Kerry serves faithfully, but with some exasperation, is himself given to vaulting oratory, but not usually of the martial sort associated with Churchill. Obama believes that the Manichaeanism, and eloquently rendered bellicosity, commonly associated with Churchill were justified by Hitler’s rise, and were at times defensible in the struggle against the Soviet Union.

Selected Wallpapers Creative wallpapers can serve as a nice source of inspiration. Particularly if you are having another creativity block, but don’t really have enough time to take a walk or browse through Flickr pools1. However, it isn’t easy to find some really nice wallpapers – the choice is too big, and there are simply too many sources.

Yanis Varoufakis full transcript: our battle to save Greece Read the report from Greece of our interview with Varoufakis here. This conversation took place before the deal. Harry Lambert: So how are you feeling? Yanis Varoufakis: I’m feeling on top of the world – I no longer have to live through this hectic timetable, which was absolutely inhuman, just unbelievable. I was on 2 hours sleep every day for five months. … I’m also relieved I don’t have to sustain any longer this incredible pressure to negotiate for a position I find difficult to defend, even if I managed to force the other side to acquiesce, if you know what I mean.

What ISIS Really Wants What is the Islamic State? Where did it come from, and what are its intentions? The simplicity of these questions can be deceiving, and few Western leaders seem to know the answers. In December, The New York Times published confidential comments by Major General Michael K. Fractured Lands: How the Arab World Came Apart This is a story unlike any we have previously published. It is much longer than the typical New York Times Magazine feature story; in print, it occupies an entire issue. The product of some 18 months of reporting, it tells the story of the catastrophe that has fractured the Arab world since the invasion of Iraq 13 years ago, leading to the rise of ISIS and the global refugee crisis. The geography of this catastrophe is broad and its causes are many, but its consequences — war and uncertainty throughout the world — are familiar to us all.

DmiPeople People Edit | Attach | Print version | History: r22 < r21 < r20 < r19 | Backlinks | View wiki text | Edit wiki text | More topic actions Topic revision: r22 - 11 Nov 2015 - 14:46:28 - Jonathan Gray Paris climate activists put under house arrest using emergency laws At least 24 climate activists have been put under house arrest by French police, accused of flouting a ban on organising protests during next week’s Paris climate summit, the Guardian has learned. One legal adviser to the activists said many officers raided his Paris apartment and occupied three floors and a staircase in his block. French authorities did not respond to requests for comment but lawyers said that the warrants were issued under state of emergency laws, imposed after the terror attacks that killed 130 people earlier this month. The author and climate change campaigner, Naomi Klein, accused French authorities of “a gross abuse of power that risks turning the summit into a farce”.

Egypt’s Failed Revolution The Egyptian President, Abdel Fattah El-Sisi, who came to power in a coup that, in its aftermath, resulted in the massacre of more than a thousand supporters of his predecessor, has a reputation for speaking very softly. This quality often disarms foreigners. “When you talk to him, unlike most generals, he listens,” a European diplomat told me recently. “He’s not bombastic.”