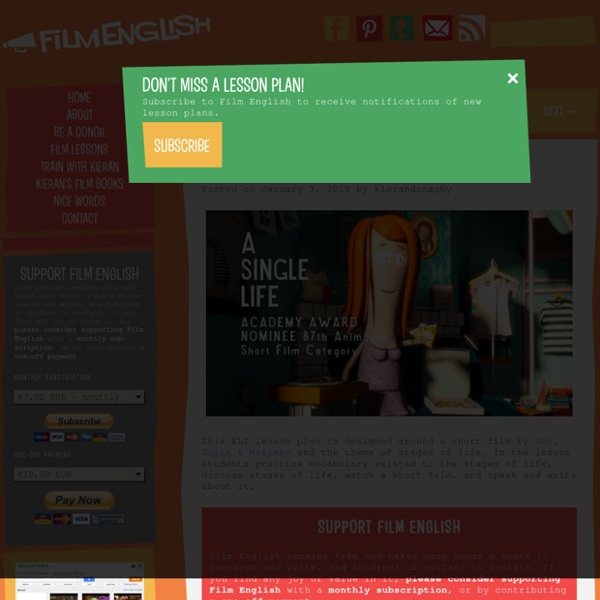 This ELT lesson plan is designed around a short film by Job, Joris & Marieke and the theme of stages of life. In the lesson students practise vocabulary related to the stages of life, discuss stages of life, watch a short film, and speak and write about it. Support Film English Film English remains free and takes many hours a month to research and write, and hundreds of dollars to sustain. If you find any joy or value in it, please consider supporting Film English with a monthly subscription, or by contributing a one-off payment. Language level: Intermediate (B1) – Upper Intermediate (B2) Learner type: Teens and adults Time: 60 minutes Activity: Watching a short film, speaking and writing Topic: Stages of life Language: Vocabulary related to childhood, adolescence, adulthood and old age. Materials: Short film Downloadable materials: a single life lesson instructions Step 1 Ask your students the following question: “What are the different stages of life?” Step 2 Step 3 Step 4 Step 5 Step 6 Step 7 Step 8 1.

Trump seen as a child by staff, says Fire and Fury author Michael Wolff Media playback is unsupported on your device The author of a controversial book on Donald Trump says that all his White House aides see him as a "child" who needs "immediate gratification". Michael Wolff said his book was based on about 200 interviews, and rejected Mr Trump's claims that it was "phony". But Secretary of State Rex Tillerson has dismissed suggestions made by Wolff that the president's mental health is failing. The book has now gone on sale early despite Mr Trump's attempts to stop it. Mr Trump's lawyers had tried to block publication of Fire and Fury: Inside the Trump White House, alleging it contained many falsehoods and saying they were considering pursuing libel charges.

Death in Cultures Around the World Death is universal, and every culture has its own ways of dealing with it. From how a person is laid to rest to how he is memorialized, every culture and religion has a unique way of burying, grieving and memorializing their deceased ones. Explore what various cultures around the world have in common, as well as particular customs that makes each one unique. The Other Pair This ELT lesson plan is designed around a short film by Sarah Zorik titled The Other Pair and the themes of altruism and empathy. Students watch a short film, write a story, and speak about a story. I would ask all teachers who use Film English to consider buying my book Film in Action as the royalties which I receive from sales help to keep the website completely free. Language level: Pre-intermediate (A2) –Intermediate (B1) Learner type: All ages Time: 60 minutes

Homepage Skin is a new film due to be released July 2009. It concerns the compelling and moving tale of Sandra Laing, born in 1955 to white Afrikaner parents in South Africa. Thanks to the chance combination of her parents’ genes, Sandra was dark-skinned , had thick curly hair and black-African features. LearnEnglish Teens - British Council Our bodies are as much as 60% water. All living things contain it and, like us, depend upon it for survival. Although 70% of the Earth is covered with water, a staggering number of the world’s poor lack even the most basic sanitation and access to clean water. 97% of the water on Earth is salt water. 2% is frozen in glaciers and ice caps. Only 1% is fresh water. That needs to be enough for everyone. All seven billion of us.

Death is not the end: Fascinating funeral traditions around the globe The funerals I’ve attended have all been very much the same. Relatives and friends arrive in all black and take seats in the church or synagogue pews for a somber ceremony where prayers are said, memories are shared and tears are shed. The attendees walk slowly out to their cars and form a single file line a behind the hearse, arriving at the graveyard where they place roses on the casket just before it’s lowered into the ground.

The Notebook This EFL lesson is designed around a beautiful short film by Greg Gray and the theme of household chores. Students learn and practise vocabulary related to household chores, talk about household chores and watch a short film. Language level: Pre-intermediate (A2)- Intermediate (B1) Learner type: Teens and adults extr@ English extr@ English promises language learning with laughter, in an authentic London setting. With 30 hilarious, half-hour sitcom programmes, the extra@ series is a delight for anyone learning English, especially young adults. The adventures of the four main characters in their London flat are stylish, sexy and funny. The extr@ series is equally at home in the language class and with friends and family, making it ideal for teacher-led and self-study language learning. The programmes feature lively, colloquial English dialogue. The characters speak naturally, but clearly with constant repetition and strong use of visual prompts that help learners without detracting from the sitcom format.

ENGLISH 6 – Patricia Diaz Hem » LÄNKSAMLINGAR » ENGELSKA » ENGLISH 6 This is basically the level of the national exams in English 6 and what they look like: 1. Exercise matching: ”What’s the topic?” Transcript Ira Glass Act Two, Lucas and Sarah. Sometimes you have just one thing in common with somebody else, and then you have to figure out if that connection means anything more, if you're supposed to be friends or something.

Geistlich Pharma – regenerative medicine for greater quality of life Geistlich Pharma is specialised in biomaterials for the regeneration of bone, cartilage and tissue and develops and manufactures medical devices and pharmaceuticals with the goal of giving patients a better quality of life. The products are marketed by the company via more than 60 distribution partners worldwide as well as ten affiliates: UK, Germany, Italy, France and China, Brazil, South Korea, North America, Australia and India. The company has a global workforce of around 500.