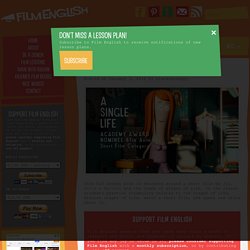 In the lesson students practise vocabulary related to the stages of life, discuss stages of life, watch a short film, and speak and write about it. Support Film English Film English remains free and takes many hours a month to research and write, and hundreds of dollars to sustain. If you find any joy or value in it, please consider supporting Film English with a monthly subscription, or by contributing a one-off payment. Language level: Intermediate (B1) – Upper Intermediate (B2) Learner type: Teens and adults Time: 60 minutes Activity: Watching a short film, speaking and writing Topic: Stages of life Language: Vocabulary related to childhood, adolescence, adulthood and old age. Materials: Short film Downloadable materials: a single life lesson instructions Step 1 Ask your students the following question: “What are the different stages of life?”

Step 2 Step 3 Step 4 Step 5 Step 6 Step 7 Step 8 1. How Would Immortality Change the Way We Live? - The Atlantic. Everything That Will Kill You... From A to Z. The Gashlycrumb Tinies by Edward Gorey. Crime Scene. Death. English Language Listening Library Online: Learn from over 800 activities. Customs-Beliefs-Death-Dying. Death in Cultures Around the World. Death is universal, and every culture has its own ways of dealing with it. 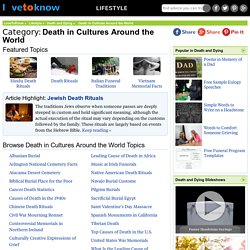 From how a person is laid to rest to how he is memorialized, every culture and religion has a unique way of burying, grieving and memorializing their deceased ones. Explore what various cultures around the world have in common, as well as particular customs that makes each one unique. Cultural Customs and Views About Death Grieving and burial practices are unique around the world.

What may be commonplace in one country might be considered sacrilegious somewhere else. Rituals and Traditions - Learn about Navajo burial rituals designed to keep the dead from returning to the land of the living, and why following correct burial rituals is so important in African cultures. Understanding Promotes Respect for All As culturally diverse as the world is, there's so much to learn from each other about dying and grieving. 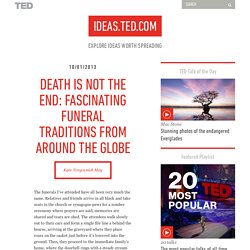 Relatives and friends arrive in all black and take seats in the church or synagogue pews for a somber ceremony where prayers are said, memories are shared and tears are shed. The attendees walk slowly out to their cars and form a single file line a behind the hearse, arriving at the graveyard where they place roses on the casket just before it’s lowered into the ground. Then, they proceed to the immediate family’s home, where the doorbell rings with a steady stream of loved ones — casserole dishes in hand — since, in the days ahead, people often forget to eat.

Cultural anthropologist Kelli Swazey (TED Talk: Life that doesn’t end with death) shares a different approach to memorializing the dead. In Tana Toraja in eastern Indonesia, funerals are raucous affairs involving the whole village. During Kelli Swazey’s TED Talk, she shows a slide of a Torajan family with their deceased relative. The New Orleans jazz funeral. Euthanasia - Pros and Cons of Mercy Killing. 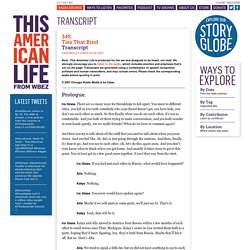 Sometimes you have just one thing in common with somebody else, and then you have to figure out if that connection means anything more, if you're supposed to be friends or something. And it's especially hard to figure out if you feel obligated to the other person in some way. Jill Wolfson has this story. Jill Wolfson For a lot of her childhood, Sarah knew there was something wrong with her. In the hospital, she had to stay flat on her back to prevent a stroke. Sarah It was a Friday night. Sarah's mom, Laura. Laura David, her dad, called, and goes, Well, it's a heart. My heart, since it was three times the size that it should have been, the heart cavity was really large.

I remember the surgeon telling us that it was a perfect heart. What do you remember about post-surgery? Oh, my gosh. And the first time I got to come in and see her afterwards, I touched her feet. For most families, this is where it would end. I don't know. The investigation stalled there. Ties That Bind. Mortality. But Am I Really Dead? After Life. Idioms and Sayings About Life and Death - Idioms and Sayings About The Human Body. List of expressions related to death.