What the future of work will mean for jobs, skills, and wages 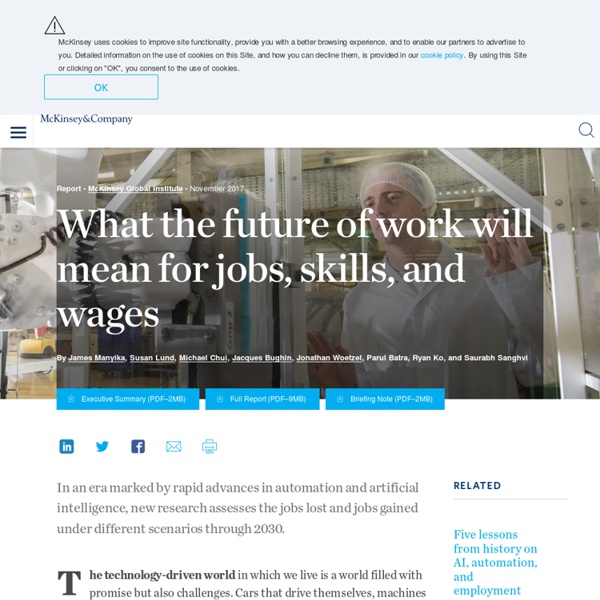 In an era marked by rapid advances in automation and artificial intelligence, new research assesses the jobs lost and jobs gained under different scenarios through 2030. The technology-driven world in which we live is a world filled with promise but also challenges. Cars that drive themselves, machines that read X-rays, and algorithms that respond to customer-service inquiries are all manifestations of powerful new forms of automation. Yet even as these technologies increase productivity and improve our lives, their use will substitute for some work activities humans currently perform—a development that has sparked much public concern. Video Powerful new technologies are increasing productivity, improving lives, and reshaping our world. The results reveal a rich mosaic of potential shifts in occupations in the years ahead, with important implications for workforce skills and wages. 1. 2. Rising incomes and consumption, especially in emerging economies Aging populations 3. Wage level 4. 5.

Beneath the U.S. job numbers: Tech’s influence on the workforce continues to hollow out the labor market Like clockwork, the start of each month brings the latest update on U.S. job numbers from the U.S. Bureau of Labor Statistics (BLS). Vital to assembling a momentary look at the job market’s latest trends, the report will support a pulse of urgent and useful news stories with its mixed and sometimes blurry data points on such topics as job growth and unemployment. And yet, for all that, the jobs report remains in many ways a distraction from the most important longer-term trend lines and macro forces.

How to See "Structure" You have probably already learned about the importance of distinguishing among events, patterns, and structure. But still, you may be finding it difficult to apply this distinction. Perhaps when you try to analyze an issue from this perspective, the lines between patterns and structure get blurred or you find structure hard to see. You are not alone many learners encounter these difficulties. There are guidelines, however, that can help you to see structure and seeing structure will provide you with leverage for solving your long-term business challenges.

The department of transportation of the future Transportation will be dramatically different in ten years. To adapt, public entities and stakeholders must act today. In ten years, transportation in the United States will look far different than it does now. Already, vehicle-sharing and electrification are widespread; and autonomous vehicles (AVs) and the Internet of Things are poised to make even bigger waves.

Digitalization and the American workforce In recent decades, the diffusion of digital technology into nearly every business and workplace, also known as “digitalization,” has been remaking the U.S. economy and the world of work. The “digitalization of everything” has at once increased the potential of individuals, firms, and society while also contributing to a series of troublesome impacts and inequalities, such as worker pay disparities across many demographics, and the divergence of metropolitan economic outcomes. In light of that, this report presents a detailed analysis of changes in the digital content of 545 occupations covering 90 percent of the U.S. workforce in all industries since 2001. The analysis categorizes U.S. occupations into jobs that require high, medium or low digital skills and tracks the impacts of rapid change. The U.S. economy is digitalizing at an extremely rapid pace. Select occupations and digital skill level, 2016

The Self-Tuning Enterprise Wouldn’t it be nice if an algorithm could tell you when to develop a new business model or whether to enter a new market? We’d be lying if we said that such an algorithm exists. It doesn’t, and we don’t imagine a time in the foreseeable future when algorithms (or other forms of artificial intelligence) will be able to answer such difficult strategic questions. What Will Work Look Like in 2030? Imagine a world in which the human resources function as we know it vanishes and is replaced by automation, outsourcing, and self-organizing teams. Or a world in which top talent is fought over so fiercely that the most adept tech workers hire agents to negotiate and manage their careers. It may sound like science fiction.

Where Will We Be in 2050? – Scenario I: A World in Ruins Where Will We Be in 2050? Scenario I: A World in Ruins By Kevin D. Denee A New Year’s resolution to address wage inequality in firms As I was making my New Year’s resolutions a few days ago, I found myself distracted by an old item of news. It said that the civil servant in the United Kingdom who was responsible for increasing the pension age to 67 was to retire at the age of 61 with a pension pot of 1.8 million pounds—another example, the article suggested, of the establishment helping themselves while applying a different set of rules to the rest of us. Regardless of the rights and wrongs of that particular case, it set me thinking about inequality—not just in the U.K., but more generally for developed countries. Which begs the question “why not?”

How smart platforms can crack the complexity challenge in project industries Modularization excels in high-volume industries such as automotive, but does it offer tangible benefits for companies that tackle just a few, extremely complicated projects each year? The builders of steel plants, chemical plants, paper mills, wind parks, packaging lines, or power plants fall into this category, completing a handful of highly specialized solutions every year that feature very specialized components. New research—laid out in our report Smart platforms: Cracking the complexity challenge of project industries—affirms that, if done right, a modular platform strategy can deliver significant value quickly in these situations to fix the complexity challenge. In industries focused on large projects, companies typically face four key challenges: customization at low prices, delays and cost overruns, long payback times due to low volumes, and flexibility between customers and suppliers.

Scientists store data inside DNA that could last MILLIONS of years Potential for DNA to be used for data storage has been discussed for yearsBut retrieving the data encoded in the genes has previously proved trickyInspired by fossils, researchers from Zurich encased DNA in a 'fossil shell'They subjected these shells - or silica spheres - to extreme temperaturesThis was carried out to mimic chemical degradation seen naturally on DNADespite the conditions, the DNA was extracted and decoded from the silicaAnd if preserved in freezing temperatures, the researchers said the data has the potential to last for 'millions of years' inside DNA By Victoria Woollaston for MailOnline Published: 15:35 GMT, 16 February 2015 | Updated: 18:38 GMT, 18 February 2015 Chemists subjected spheres of DNA to extreme temperatures and found the material - and the data stored on it - could be successfully decoded

10 Dumb Mistakes Smart People Make When It Comes To Finding Their Purpose You would think a world filled with options and opportunity would excite you. But sometimes having too many options can paralyze you. You might think to yourself: Transform the whole business, not just parts That’s the conventional wisdom: improve one part at a time, then move to the next, methodically and consistently. But it’s clear that this traditional view, with stability as the primary value, is increasingly wrong. It misses the intersections between the parts, which are where value tends to be lost. Research by our colleagues (see Kevin Laczkowski, Tao Tan, and Matthias Winter, “The numbers behind successful transformations,” McKinsey Quarterly, October 2019) shows that the most successful performance transformation efforts cut across business units and functions, target both the top and bottom lines, and engage a substantial share of the workforce. At best, we find, improving the parts improves only those parts, without necessarily reaching the whole.