Scientific Speed Reading: How to Read 300% Faster in 20 Minutes 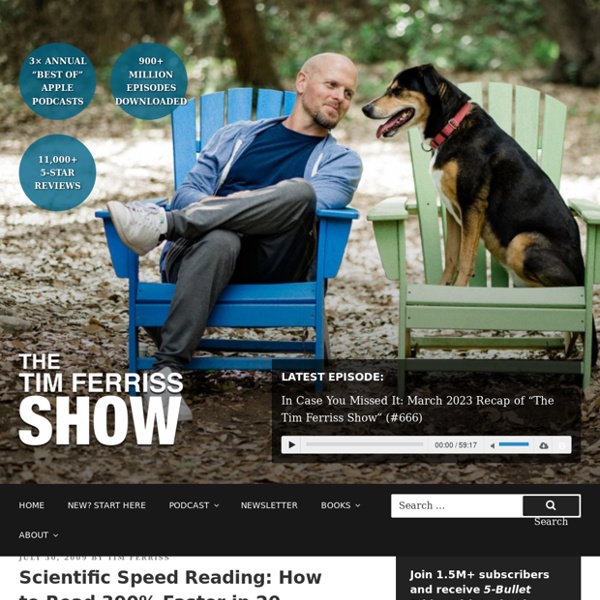 (Photo: Dustin Diaz) How much more could you get done if you completed all of your required reading in 1/3 or 1/5 the time? Increasing reading speed is a process of controlling fine motor movement—period. This post is a condensed overview of principles I taught to undergraduates at Princeton University in 1998 at a seminar called the “PX Project”. The below was written several years ago, so it’s worded like Ivy-Leaguer pompous-ass prose, but the results are substantial. In fact, while on an airplane in China two weeks ago, I helped Glenn McElhose increase his reading speed 34% in less than 5 minutes. I have never seen the method fail. The PX Project The PX Project, a single 3-hour cognitive experiment, produced an average increase in reading speed of 386%. It was tested with speakers of five languages, and even dyslexics were conditioned to read technical material at more than 3,000 words-per-minute (wpm), or 10 pages per minute. The Protocol First – Determining Baseline 2) Speed (3 minutes):

Mrs. Dalloway / Virginia Woolf Mrs. Dalloway said she would buy the flowers herself. For Lucy had her work cut out for her. The doors would be taken off their hinges; Rumpelmayer’s men were coming. And then, thought Clarissa Dalloway, what a morning — fresh as if issued to children on a beach. What a lark!

Can I Learn to Read Faster and Get Through My Backlog of Books? Advice on how to read faster is all good and well, BUT: 1) Why does everything have to happen FASTER FASTER FASTER and why do you think you need to read MORE MORE MORE? It's not about quantity, but about quality. How to Create a Million-Dollar Business This Weekend (Examples: AppSumo, Mint, Chihuahuas) Noah Kagan built three multi-million dollar online businesses before turning 28. He also looks great in green. (Photo: Brandon Wells) I first met Noah Kagan over rain and strong espressos at Red Rock Coffee in Mountain View, CA. It was 2007. We were both in hoodies, had a shared penchant for the F-bomb and burritos, all of which led to a caffeine-infused mindmeld.

How to Learn Speed Reading: 17 steps Steps Part 1 Learning to Speed Read How I Was Able to Ace Exams Without Studying Editor’s note: This is a guest post from Scott Young of ScottYoung.com. In high school, I rarely studied. Despite that, I graduated second in my class. Spies by Michael Frayn What is a plot? For the reader, it is the discovery of concealed connections between events in a narrative. Michael Frayn's Spies is a novel with a carefully engineered plot, and a story whose two main characters are determined to uncover the sinister logic of apparently ordinary events. They are themselves looking for a plot. During the second world war, Stephen and his friend Keith live in a suburban cul-de-sac on the edge of the countryside. We do not exactly know how old the boys are (this uncertainty will itself serve the plot).

Learn to Speed Read in Just a Few Hours I’m not one for making big New Year’s Resolutions as I am a continual goal setter and look at life plans and goals on a weekly or at least monthly basis, so I don’t need one day a year to pretend I’m actually going to change the year, I just always do that. However, there is one that I can’t encourage others enough to look more seriously at and that is about reading. I hope I can inspire a few people to put this on their own goal sheets for the year. Thank you everyone for a wonderful 2008, may your 2009 be even better! Background One of the most important things in my life was discovering speed reading.

Total Immersion: How I Learned to Swim Effortlessly in 10 Days and You Can Too Is it possible to get good at swimming late in life? Yes. (Photo: Shutterhack) Swimming has always scared the hell out of me. Despite national titles in other sports, I’ve always fought to keep afloat. This inability to swim well has always been one of my greatest insecurities and embarrassments. more speed reading exercises Practicing in How to Speed Read- more speed reading exercises When you practice and repeat the speed reading exercises, you acquire skills and techniques that help you achieve your goal. Oh, did I mention goal? If you want to speed read, you must set your mind, by setting a goal to speed read. Once you set your mind to speed read, you can then start-timing self. You want to factor in comprehension and time spent reading.

How to Learn (Almost) Anything This is a guest post by Glen Allsopp of PluginID. Have you ever read an informative book, only to later remember just a few main points — if anything at all? The problem might be that you’re using one of the least efficient ways of learning available. The Gospel of Wealth "Savage Wealth",[2] more commonly known as "The Gospel of Wealth",[3] is an article written by Andrew Carnegie in 1889[4] that describes the responsibility of philanthropy by the new upper class of self-made rich. Carnegie proposed that the best way of dealing with the new phenomenon of wealth inequality was for the wealthy to redistribute their surplus means in a responsible and thoughtful manner. This approach was contrasted with traditional bequest (patrimony), where wealth is handed down to heirs, and other forms of bequest e.g. where wealth is willed to the state for public purposes. Carnegie argued that surplus wealth is put to best use (i.e. produces the greatest net benefit to society) when it is administered carefully by the wealthy. Give to give anew[edit]