Collection of data visualizations to get inspired and finding the right type. 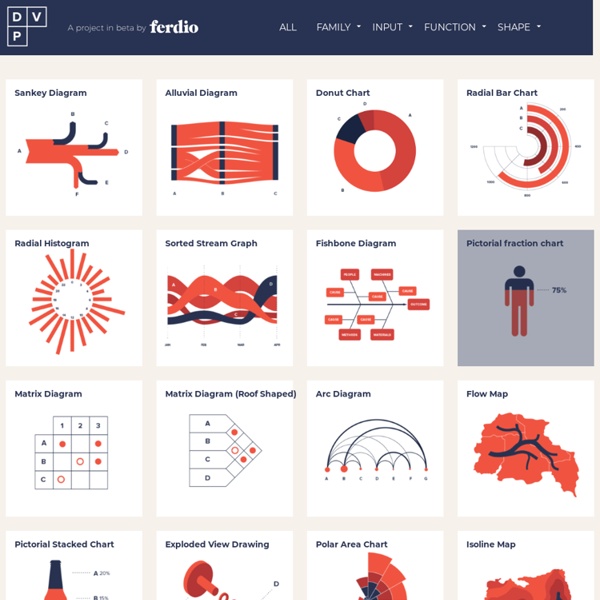 A Visual Vocabulary for Concept Models – Eleganthack Sign up to be alerted when Pencil Me In, my book on visual thinking, is available. I’m gone a little crazy for concept models. It started with when I wrote, How to Make a Concept Model, and then when I followed up with Five Models for Making Sense of Complex Systems. Martin Grandjean » Digital humanities, Data visualization, Network analysis » Mapping a Century of International Congresses International congresses, meetings of diplomats and experts, have been almost exclusively European events for more than a century. This map shows the location of the +8000 congresses held between 1840 and 1960 and highlights the domination of certain urban areas in Western Europe. A map of the distribution of international congresses with a focus on Europe (between 1840 and 1960, 6 congresses out of 7 took place in Europe). Scale: Paris=1092; London=546; Berlin=188. CC-BY-SA Martin Grandjean 2019 Data collection

Vérifier son site pour les daltoniens >>> Toptal Color Blind Filter Use the Colorblind Colorlab to select safe colors earlier in the design process. Learn more about colorblindness in this Wikipedia entry. This tool is still in development, but feedback is welcome while we work on it. 13 Free Data Visualization Tools By Vikas Lalwani Data doesn’t have to be boring. Adding a dash of visual appeal to raw data can make it easily comprehensible and instantly appealing. In the interest of (1) making your data more user-friendly and (2) not boring the eyes out of anyone who sees your work, picking a trusty data visualization tool is a must. With so many tools out there, choosing the right one that serves your specific needs can be a tedious task.

See How the World’s Most Polluted Air Compares With Your City’s The floating particles on this page depict microscopic particulate pollution called PM2.5. The number of particles you see here represents the upper limit for “good” air quality, as defined by the United States Environmental Protection Agency: 12 micrograms per cubic meter over 24 hours. We made our best guess for your location, or you can pick another.This is pollution in New York City on the worst air quality day this year.

Data Visualization 101: Pie Charts In our Data Visualization 101 series, we cover each chart type to help you sharpen your data visualization skills. Pie charts are one of the oldest and most popular ways to visualize data. This classic chart is the perfect example of the power of data visualization: a simple, easy-to-understand presentation that helps readers instantly identify the parts of a whole. Respecter les ratios >>> Misleading graph Graph that misrepresents data In statistics, a misleading graph, also known as a distorted graph, is a graph that misrepresents data, constituting a misuse of statistics and with the result that an incorrect conclusion may be derived from it. Graphs may be misleading through being excessively complex or poorly constructed. Even when constructed to accurately display the characteristics of their data, graphs can be subject to different interpretation, or unintended kind of data can seemingly and ultimately erroneously be derived.[1]

One Chart, Nine Tools – Revisited · Lisa Charlotte Rost 18 Oct 2018 Disclaimer: Since November 2017 I work for Datawrapper, a charting tool. Which means that I can’t review any charting tool unbiased anymore. I will still try. 2.5 years ago I wrote an article recreating the same bubble chart with 24 different charting tools: twelve charting apps and twelve libraries/frameworks. Afterward, I wrote an article for SOURCE explaining what I had learned during this experiment.

Periodic Table of Innovation Our Non-Executive Chairman, Mike Hutcheson, is currently in the process of developing an Innovation and Entrepreneurship paper for third year students at AUT University – based on his proprietary tool, the Periodic Table of Innovation. Here, he gives some insight into the structure and purpose of the paper – and what he hopes will be the future of entrepreneurialism in New Zealand. Ultimately, I want to make the Table open source, available to every Kiwi. Movement data exploration and analysis MovingPandas implements Trajectory data structures and corresponding methods for handling movement data based on GeoPandas. The official documentation is hosted on ReadTheDocs. For an example use case, check out our movement data exploration tutorial. Features Convert GeoPandas GeoDataFrames of time-stamped points into MovingPandas Trajectories and TrajectoryCollections Add trajectory properties, such as movement speed and direction Split continuous observations into individual trips Generalize Trajectories Aggregate TrajectoryCollections into flow maps Create static and interactive visualizations for data exploration