One theory all teachers with disruptive children should know about 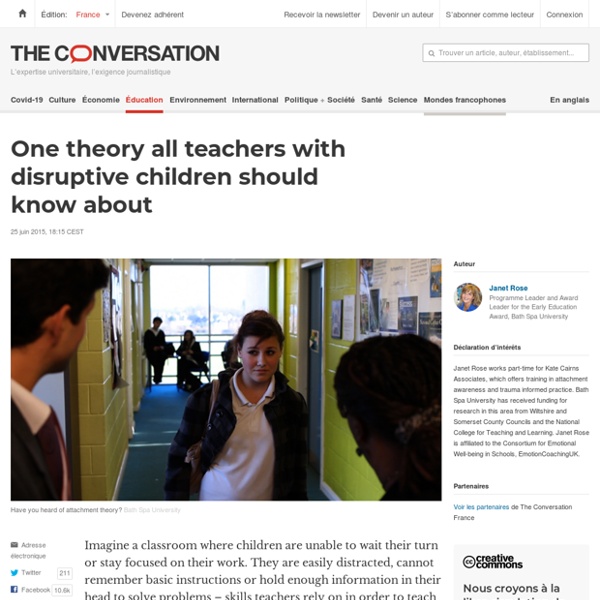 Imagine a classroom where children are unable to wait their turn or stay focused on their work. They are easily distracted, cannot remember basic instructions or hold enough information in their head to solve problems – skills teachers rely on in order to teach successfully. These behavioural issues are all examples of problems that can arise from attachment issues – based on the relationship between children and their main caregiver. Attachment theory is now one of the world’s most well-researched theories about human development. It was first proposed by the 20th-century British psychiatrist John Bowlby, who considered that children needed to develop a secure attachment with their main caregiver via sufficiently consistent, responsive, sensitive, appropriate and predictable care and support. Research has shown that secure attachments create mental processes that enable a child to regulate emotions and attune to others. Trauma takes its toll Making teachers aware

Don't Expect Toddlers To Behave Consistently — They Literally Can't One day, when my oldest daughter was not quite 2, she wouldn’t sit still to let me change her diaper. Squirrelly and writhing, she made a game out of staying half naked. She wasn’t fussing about it or anything — in fact, she was giggling maniacally. The problem was that we were running late. Nothing I did seemed to faze her. I tried distracting her with a toy. The Key to Effective Classroom Management It’s a daunting but all-too-common sight for many teachers: A classroom full of rowdy students who are unable to focus on the lesson. Classroom management techniques may get things back on track, but valuable time has already been lost. Many experienced teachers know that making meaningful connections with students is one of the most effective ways to prevent disruptions in the first place, and a new study set out to assess this approach.

21 of the Best Early Years Books for International Friendship Day We know that skills like empathy aren’t fully developed until later in a child’s life, which is why there are so many stories on friendship and how to treat people aimed at Early Years. International Friendship Day, then, is a great opportunity to share some of these amazing books with your children. It does, however, fall on Sunday 30 July. So celebrating on the day itself is going to be difficult, doubly so for Reception classes who are on summer holidays. Here are our picks for some top tales that touch on various aspects of friendship that kids will love. 1 | Bubble Trouble Which Early Childhood Experiences Shape Adult Life? By Maanvi Singh, NPR Most of us don’t remember our first two or three years of life — but our earliest experiences may stick with us for years and continue to influence us well into adulthood. Just how they influence us and how much is a question that researchers are still trying to answer. Two studies look at how parents’ behavior in those first years affects life decades later, and how differences in children’s temperament play a role. The first study, published Thursday in Child Development, found that the type of emotional support that a child receives during their her first three and a half years has an effect on education, social life and romantic relationships even 20 or 30 years later.

Why Empathy Holds the Key to Transforming 21st Century Learning By Thom Markham Like other aspects of modern life, education can make the head hurt. So many outcomes, so much important work to do, so many solutions and strategies, so many variations on teaching, so many different kinds of students with so many different needs, so many unknowns in preparing for 21st Century life and the endless list of jobs that haven’t been invented. What if we discovered one unifying factor that brought all of this confusion under one roof and gave us a coherent sense of how to stimulate the intellect, teach children to engage in collaborative problem solving and creative challenge, and foster social-emotional balance and stability—one factor that, if we got right, would change the equation for learning in the same way that confirming the existence of a fundamental particle informs a grand theory of the universe? That factor exists: It’s called empathy. To make that argument requires a deep dive into the profound nature of empathy.

KQED Public Media for Northern CA Babies and toddlers raised in supportive and caring home environments tended to do better on standardized tests later on, and they were more likely to attain higher degrees as adults. They were also more likely to get along with their peers and feel satisfied in their romantic relationships. "It seems like, at least in these early years, the parents' role is to communicate with the child and let them know, 'I'm here for you when you're upset, when you need me. And when you don't need me, I'm your cheerleader,' " says Lee Raby, a psychologist and postdoctoral researcher at the University of Delaware who led the study. Raby used data collected from 243 people who participated in the Minnesota Longitudinal Study of Risk. All the participants were followed from birth until they turned 32.

This ‘Kindness Curriculum’ Is Free And Should Be Used In Every Classroom Imagine living in a world that valued kindness enough to teach it along with academics. Educators would teach kids to manage their emotions in addition to standard curriculum such as math and science. Sounds pretty amazing, doesn’t it? Well, the Center for Healthy Minds at the University of Wisconsin-Madison has created a free “kindness curriculum” for kids, designed to do just that.

How Are Happiness and Learning Connected? We've all heard of the fight or flight response. We go into survival mode when threatened by something or someone. We either put up our dukes (literally or metaphorically) or take off running (literally or metaphorically). Students often go into survival mode when they feel threatened by an overwhelming cognitive task or confusing text, or when they are called on and don't know the answer, or are confronted or teased by another student (or a teacher!) Can one even learn in such a setting? It's a question that deserves our full consideration.