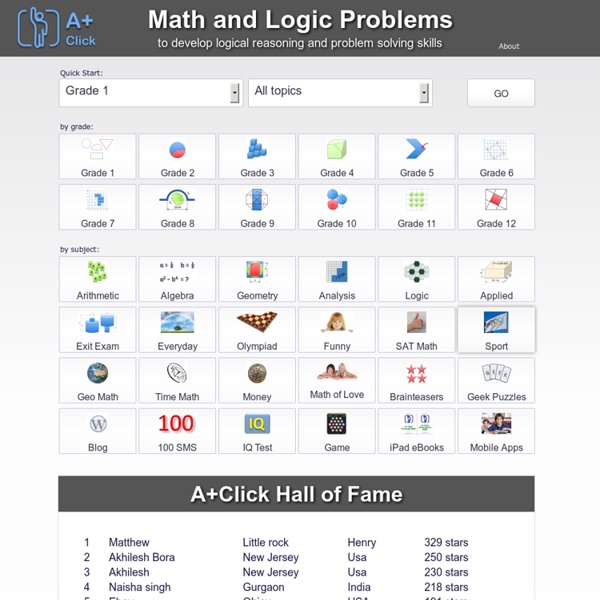 Search Looking Back and Moving Forward Pre-K-2, 3-5, 9-12 This final lesson of the unit reviews the work of the previous lessons through a variety of activity stations, one of which involves using an interactive graphing tool. Students model with buttons and record addition and subtraction. Counting Embedded Figures Math Tests and Quizzes That Are Aligned Core Math Curriculum Math Tests and Topic/Skill Based Quizzes We now have a full line of tests for each section of the common core curriculum. Test are fully available to members for immediate download. There is a test sampler in each section for those who haven't signed up yet and want to see what it is all about. We will continue to add new tests on a monthly basis.

Problems of the Month Problem solving is the cornerstone of doing mathematics. A problem that you can’t solve in less than a day is usually a problem that is similar to one that you have solved before. But in real life, a problem is a situation that confronts you and you don’t have an idea of where to even start. Maths Videos Here is a collection of hand-picked mathematical videos freely available on YouTube. If you are looking for a particular topic you may like to begin on out topics page where you can also find starters, visual aids and interactive resources.Please let us know if you find any interesting videos we should include in this list. A History of the Calendar A fast paced animation explaining the development of the modern calendar.

Tarsia With this software you will easily be able to create, print out, save and exchange customised jigsaws, domino activities and a variety of rectangular card sort activities. The activities created using this software can be presented in printable form, ready to cut out. Formulator Tarsia known earlier as Formulator Jigsaw is an editor designed for Teachers of Mathematics creating the activities in a form of jigsaws or dominos etc for later use in a class. It includes the powerful equation editor for building the math-expressions for the activities. An advanced feature of text placement along the side of the shape makes this tool irreplaceable software for fast activity creation. Formulator Tarsia became a powerful tool for learning activities since it supports the activity templates.

Fun Kids Online Math Games "Sheppard offers everything from early math to pre-algebra. The lessons include interactive activities to practice concepts. Students can shoot fruit, pop balloons, and even play math man (the math version of pac man!). Fractions, place value, money, and basic operations are some of the areas that are covered. Check it out at " --Shannon Jakeman , sjakeman.blogspot.com "Online math games, like the ones that you'll find for free at Sheppard Software, provide a valuable opportunity for children to learn a great deal while they're having fun. LearnZillion x Menu Welcome to LearnZillion! Let's get started. Copyright © 2015 LearnZillion

The Game of SKUNK Write the following questions on the chalkboard or overhead: I might make more money if I was in business for myself; should I quit my job? An earthquake might destroy my house; should I buy insurance? Home Page Teachers Primary Pupils Secondary Students Events and PD "It gave me some good ideas to use in the classroom and ... a link that I can get all of the activities from." Book NRICH Bespoke PDBook Forthcoming EventsBook our Hands-on Roadshow Parabola The parabola has many important applications, from a parabolic antenna or parabolic microphone to automobile headlight reflectors to the design of ballistic missiles. They are frequently used in physics, engineering, and many other areas. Strictly, the adjective parabolic should be applied only to things that are shaped as a parabola, which is a two-dimensional shape. However, as shown in the last paragraph, the same adjective is commonly used for three-dimensional objects, such as parabolic reflectors, which are really paraboloids. Sometimes, the noun parabola is also used to refer to these objects. Though not perfectly correct, this usage is generally understood.

This website is organized by grade level and topic of study. It is great for critical thinking in math practice. by reneejernigan Apr 22