The One Thing We Should Always Remember About Donald Trump 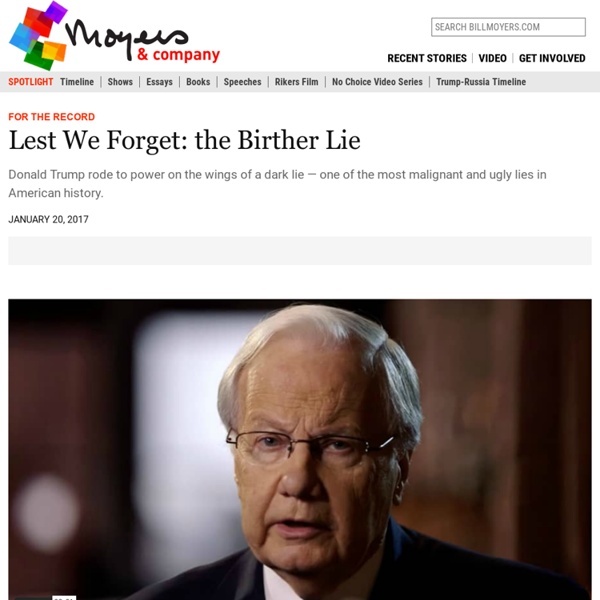 In this web exclusive, Bill Moyers and four historians dissect the big lie Trump rode to power: the Birther lie. Nell Painter, historian and Edwards Professor of American History, Emerita, at Princeton University; Khalil Gibran Muhammad, professor of history, race and public policy at Harvard Kennedy School; Christopher Lebron, assistant professor of African-American studies and philosophy at Yale University; and Philip Klinkner, James S. Sherman Professor of Government, Hamilton College discuss the fertile ground on which the birther lie was sown: our nation’s history of white supremacy. Credits: Gail Ablow, Producer; Sikay Tang, Editor BILL MOYERS: I’m Bill Moyers. The most important thing to remember about Donald Trump is that he was the same man at 12:01 p.m. What’s different is that in those two minutes Donald Trump was handed the most awesome power imaginable. LOU DOBBS (CNN 7/21/09): Up next, the issue that won’t go away: the matter of President Obama and that birth certificate.

Related:  Outrageous • Trumped Up • Fat Fraud Sits on a Mountain of Lies

World's richest 1% grabbed 82% of all wealth created in 2017, Oxfam study finds - Jan. 21, 2018 That's according to a new report from Oxfam International, which estimates that the bottom 50% of the world's population saw no increase in wealth. Oxfam says the trend shows that the global economy is skewed in favor of the rich, rewarding wealth instead of work. "The billionaire boom is not a sign of a thriving economy but a symptom of a failing economic system," said Winnie Byanyima, executive director of Oxfam International. The head of the advocacy group argued that the people who "make our clothes, assemble our phones and grow our food" are being exploited in order to enrich corporations and the super wealthy.

Ronald Reagan and The Great Social Security Heist : FedSmith.com View this article online at Ronald Reagan was one of the most popular presidents in modern history. As a former Hollywood actor, he had an uncommon degree of charisma. The conservatives absolutely loved Reagan for his efforts to reduce the size of government, but most liberals hated him with a passion. Reagan is still revered by a lot of Americans. This reverence for Ronald Reagan helps to explain how he was able to fool most of the American people to a degree unparalleled by any other modern president. Donald Trump is wrong about wage trends Before meeting with his Cabinet, President Donald Trump held court with the reporters assembled at the White House. Among other topics, Trump discussed some of the economic achievements on his watch: "Wages are rising at the fastest pace in more than a decade, something that people have been waiting for, as you know.

The health impact of separating migrant children from parents Media playback is unsupported on your device Paediatric and child trauma experts are sounding the alarm that separating migrant children from their parents at the US border can cause serious physical and psychological damage. As more stories emerge about children being separated from their parents at the border between Mexico and the US, doctors and scientists are warning that there could be long-term, irreversible health impacts on children if they're not swiftly reunited. The head of the American Academy of Pediatrics went so far as to call the policy "child abuse" and against "everything we stand for as paediatricians". "This is completely ridiculous and I'm approaching that not as someone who's taking a position in the politics, but as a scientist," says Charles A Nelson III, a professor of paediatrics and neuroscience at Harvard Medical School.

Deaf children losing out as English councils cut support, charity warns More than a third of councils in England are cutting educational support totalling £4m for deaf children, according to figures obtained by the National Deaf Children’s Society (NDCS). The figures, gained through freedom of information requests, show that councils in these areas are cutting 10% on average from deaf children’s services, which the charity warns are already near breaking point. In the last four years, one in 10 specialist teachers of the deaf have been cut, the charity claims. Meanwhile, deaf children are falling behind at every stage of school, and at GCSE two-thirds of deaf children fail to achieve a grade 5 in both English and maths – a key government target. The NDCS said it had received responses from 122 councils, of which 45 said they were making cuts between 2017-18 and 2018-19.

Saudi Arabia accused of torturing female activists by electrocution and flogging leaving them unable to walk Campaigners have accused Saudi Arabia of subjecting several activists, including female human rights defenders, imprisoned since May to torture and sexual harassment. More than a dozen women’s rights activists have been detained for months, most of whom had campaigned for the right to drive and an end to the Kingdom’s male guardianship system, but some have since been freed. A group of UN experts last month called for the immediate release of six female human rights defenders they said were still being held incommunicado in Saudi Arabia. The arrests in May followed an earlier crackdown on clerics, intellectuals and activists in September 2017, in an apparent attempt to silence potential opponents of the country’s de facto ruler Crown Prince Mohammed bin Salman. The torture allegations come as Riyadh faces international outcry over the killing last month of dissident Saudi journalist Jamal Khashoggi in the Saudi consulate in Istanbul.

Trump Org: a magnet for dirty businessmen By Inti Pacheco, Manuela Andreoni, Alex Mierjeski and Keenan Chen In late 1997, Donald Trump was beginning to bounce back from near financial ruin. Two years earlier, his financial losses had totaled $916 million following a string of bankruptcies at Trump casinos and other properties earlier in the decade, according to tax records published in late 2016. But then, Trump stumbled upon a deal that would change the course of his real estate business.

Donald Trump off-base in describing GDP growth on his watch During a June 28 visit to Mount Pleasant, Wis. -- the site of a planned Foxconn manufacturing facility -- President Donald Trump touted his economic record, including the growth of the nation’s gross domestic product, which measures the size of the economy. "Watch those GDP numbers," Trump said. "We started off at a very low number, and right now we hit a 3.2," or 3.2 percentage growth compared to the last quarter on an annualized basis.

Trump's Budget Wouldn't Erase Deficits, CBO Said Under President Donald Trump’s proposed budget for fiscal year 2018, there would have been hundreds of billions of dollars in deficits each year from 2018 to 2027, according to projections from the nonpartisan Congressional Budget Office. That contradicts Acting White House Chief of Staff Mick Mulvaney’s claim that the U.S. “would actually be on a glide path to balancing the budget” had Congress enacted Trump’s desired plan.

Related:
Related:  Outrageous   -  Trumped Up   -  Fat Fraud Sits on a Mountain of Lies