How Savvy are Your Students?: 7 Fake Websites to Really Test Their Evaluation Skills 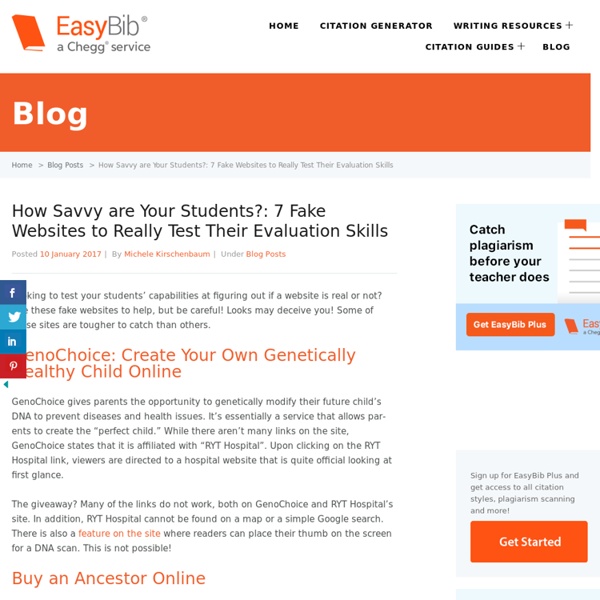 Drop Bear The Drop Bear, Thylarctos plummetus, is a large, arboreal, predatory marsupial related to the Koala. Drop Bear distribution map Photographer: © Australian Museum Standard Common Name 10 Ways to Spot a Fake News Article - EasyBib Blog For many of us, 2016 is going down as a year to forget. Election upsets, Zika, the Syrian crisis, and unfortunately tons of fake news about all of the above and everything in between. Denzel Washington was recently quoted as saying, “If you don’t read the newspaper, you’re uninformed. If you do read the newspaper, you’re misinformed.”

5 Research Tools Students Often Overlook When they're given a research assignment most students immediately turn to Google to start their research. Unfortunately, many students don't recognize that they are limiting their research efforts by not going beyond Google.com to search. Here are five research tools that I introduce to students to get them to go beyond using Google.com. 1. School librarian and library resources. Every school librarian that I know is happy to help students learn to become better researchers.

Creating videos for our library YouTube channel - Ian Clark - Medium A couple of years ago, I spent a great deal of time focused on developing our library’s YouTube channel. Previous to working on it, there were a few videos here and there, but we weren’t really using it as an effective tool to provide useful stuff for our students. A couple of years later, it was time for a refresh…so I thought I’d run through some of the things I’ve been doing to refresh the YouTube channel and highlight some things about creating videos.

Lesson Idea: Media Literacy and Fake News Overview: In a world filled with rapid pace communication through a variety of platforms, we have an abundance of information available at our fingertips. Discerning fact from fiction can be complex. Knowing the source can be challenging, and the messages being delivered can be received in different ways, effecting certain populations of people as well as our country. View the videos in this lesson with your students to cultivate an understanding of media literacy and engage in a discussion about its impact and significance for the future. Procedure:

The Book Chook: Help Kids Detect Fake News by Susan Stephenson, www.thebookchook.com “Fake news” is a term that has exploded in popularity recently. It is often used to describe articles and memes that have been deliberately fabricated to manipulate opinion or misinform. Many educators prefer to concentrate on developing critical media literacy skills in students rather than buying into a debate over whether news is fake or not. However, I want the title of my article today to reflect what people may use in a Search. Librarians and teacher librarians are experts in helping kids detect and avoid fakery so be sure to ask them for help.

10 Hilarious Hoax Sites to Test Website Evaluation – TeachBytes In this day and age, where anyone with access to the internet can create a website, it is critical that we as educators teach our students how to evaluate web content. There are some great resources available for educating students on this matter, such as Kathy Schrock’s Five W’s of Website Evaluation or the University of Southern Maine’s Checklist for Evaluating Websites. Along with checklists and articles, you will also find wonderfully funny hoax websites, aimed at testing readers on their ability to evaluate websites. How To Spot Fake News Critical thinking is a key skill in media and information literacy, and the mission of libraries is to educate and advocate its importance. Discussions about fake news has led to a new focus on media literacy more broadly, and the role of libraries and other education institutions in providing this. When Oxford Dictionaries announced post-truth was Word of the Year 2016, we as librarians realise action is needed to educate and advocate for critical thinking – a crucial skill when navigating the information society. IFLA has made this infographic with eight simple steps (based on FactCheck.org’s 2016 article How to Spot Fake News) to discover the verifiability of a given news-piece in front of you.

How Misinformation Spreads In the mid-1800s a caterpillar the size of a human finger began spreading across the northeastern U.S. This appearance of the tomato hornworm was followed by terrifying reports of fatal poisonings and aggressive behavior toward people. In July 1869 newspapers across the region posted warnings about the insect, reporting that a girl in Red Creek, N.Y., had been “thrown into spasms, which ended in death” after a run-in with the creature. That fall the Syracuse Standard printed an account from one Dr.

How Photos Fuel the Spread of Fake News During a campaign stop in South Carolina last winter, Hillary Clinton stumbled as she climbed the steps of an antebellum mansion in Charleston. Aides helped her regain her balance in a vulnerable but nondescript moment captured by Getty photographer Mark Makela. He didn’t think much of it until August, when the alt-right news site Breitbart touted it as evidence of Clinton’s failing health. “It was really bizarre and dispiriting to see,” he says. Protect Yourself from Fake News - Fact v. Fiction - Fake News - Academic Guid... Here are some steps you can take to become a critical news consumer: Determine what type of article you are reading Is it an editorial or opinion piece?