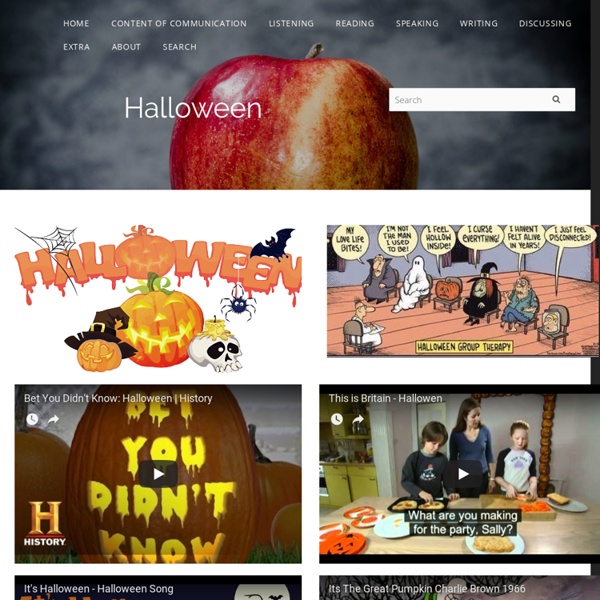 Halloween – Conversation.se – Dialoger på engelska Dialog 1 Person 1: – I’m having a Halloween party on Friday. Would you like to come? Person 2: – Yeah, sounds like fun. What time is it? Learning Registry The Learning Registry is not intended to be your portal into the world of digital resources but rather a conductor that developers can use to create the user-friendly and tailored tools you need. You are currently looking “behind the scenes” of some tools that you already enjoy. While you are welcome to take the Learning Registry for a test drive below, the primary audiences for this site are publishers and developers who, together, can create the user-friendly, tailored tools you are looking for.

Do Does Did Done The word DO appears a lot in English. This is because it can be a verb TO DO (Do / Does / Did / Done) and can also be an AUXILIARY verb (Do / Does / Did). The Verb - To Do The verb TO DO has four forms. Present Tense: Do / Does Past Tense: Did Past Participle: Done TO DO - Present Tense - (Do / Does) SEALL – Supporting EAL Learners Most classrooms are decorated with students’ work, info graphs and posters. Unfortunately they are static and are rarely used for learning. A way to make your displays more interactive is by making sure to leave space for translations for students’ own languages The photo below is a great example of a multilingual display from my classroom. ndla Canada - The Tale of the Inuit and Their Land Update Required To play the media you will need to either update your browser to a recent version or update your Flash plugin. Canada - The Tale of the Inuit and Their Land Inuit Art on display in Jordan, Ontario The Inuits belonged to nomadic tribes that moved over large arctic areas, hunting caribou, seals, fish and polar bears. During the winter, they dug themselves into snow and earth, using driftwood covered with turf as roofs, in order to avoid freezing to death.

The Seven Best Short Animated Films for the Language Classroom - Kieran Donaghy Animated films are ones in which individual drawings, paintings, or illustrations are photographed frame by frame. Traditionally animated films have been associated with children, however, nowadays they are designed to appeal to everyone. With the increased ease of creating animations, there has been a huge rise in the number of animated films being produced, and the vast majority of these are short animations. Many of these short animated films can be exploited in the language classroom as they are short enough to be used in a single session, offer a complete narrative in a short space of time, have a unique capacity of grabbing and holding students’ attention, and deal with contemporary subjects and issues, such as bullying, racism, sexism, homelessness, and human rights, which are relevant to students’ lives. Here are my seven favourite animated short films for the language classroom.

Irregular Verbs Directions: In the exercise that follows, you will read sentences that contain blanks. These blanks require the appropriate forms of irregular verbs. To keep track of your answers, print the accompanying handout. If you are unsure which choice to make, consult the rules. Disclaimer: All prizes in this exercise are cyber, which means they have no physical reality and cannot be collected for use in the material world.

Engage Now - Student Interactions - teacher heath Do you hear your students say things like: "No! That's Wrong!" Celebrate Roald Dahl 100 With Teaching Ideas! 2016 marks 100 years since the birth of the popular children's author Roald Dahl and schools around the world are celebrating with a wide range of classroom activities. To help you to prepare, we have created this list of some of our most popular Roald Dahl teaching, activity and display resources. Teaching Ideas and Classroom Activities: Organise your own Roald Dahl Day with the ideas in this post. Write your own instructions based on ideas in Roald Dahl's books.