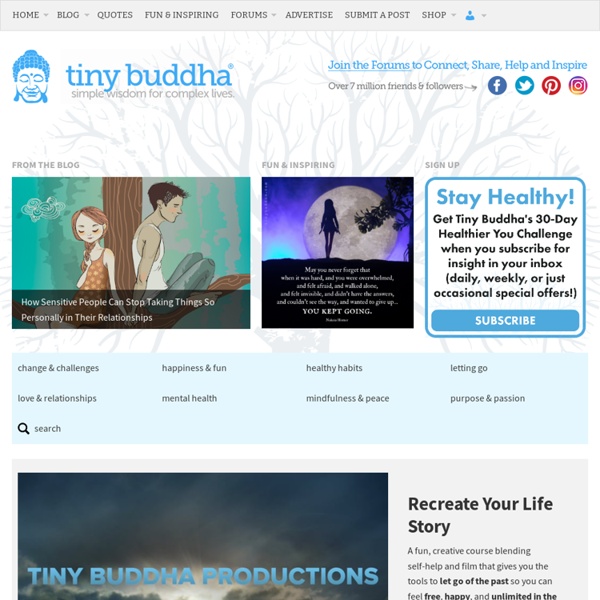 How Trigger Warnings Are Hurting Mental Health on Campus Something strange is happening at America’s colleges and universities. A movement is arising, undirected and driven largely by students, to scrub campuses clean of words, ideas, and subjects that might cause discomfort or give offense. Last December, Jeannie Suk wrote in an online article for The New Yorker about law students asking her fellow professors at Harvard not to teach rape law—or, in one case, even use the word violate (as in “that violates the law”) lest it cause students distress.

30 Little Things To Do To Become A Different You In 2016 Are you ready to improve yourself and your life in 2016? Making changes in your life doesn’t have to be totally overwhelming. There are many little things you can do to change your life in big ways.

Can Non=Muslims Be Made Friends? by Dr Khalid Zaheer by Dr. Khalid Zaheer 1) Introduction The tension between Muslims and non-Muslims, in particular Jews and Christians, as a result of the events of September 11, 2001 and beyond has made the world of ours far more intolerant and insecure than it was before. Many political, social, economic, and religious causes have been attributed to this alarming tendency.

A Message to the People-Pleasers: You are not Helping Anyone. What would you say takes up the vast majority of our time—mental space and energy? Work? Parenting? Bill-paying? Maybe it’s anxiety, personal relationships or money stress? How To Stick To Your Goals, According To Science Each new year brings feelings of hope and change, and for many of us, that means setting new goals. We promise ourselves we’re going to get healthier, be more kind or accomplish more at work. Unfortunately, making these vows is only half the battle — following through on them is an entirely different story. In fact, only about 40 percent of people actually keep their New Year’s resolutions, Forbes recently reported. Luckily, there are a few ways to stay motivated and make those ambitions a little more fail-proof. Happify, a website and app dedicated to helping people build skills for happiness through science-based activities and games, broke down the research-backed tricks to keeping your goals.

The Ancient Chinese Libertarian Tradition - Murray N. Rothbard The first libertarian intellectual was Lao-tzu, the founder of Taoism. Little is known about his life, but apparently he was a personal acquaintance of Confucius in the late sixth century BC and like the latter came from the state of Sung and was descended from the lower aristocracy of the Yin dynasty. Unlike the notable apologist for the rule of philosopher-bureaucrats, however, Lao-tzu developed a radical libertarian creed. For Lao-tzu the individual and his happiness was the key unit and goal of society. If social institutions hampered the individual's flowering and his happiness, then those institutions should be reduced or abolished altogether.

Top ten things that would-be foreign policy wonks should study It's August, which means that students in America (and plenty of other places) are heading off to college for the first time. Some of them are undoubtedly thinking about preparing for careers in international affairs. As a public service to those eager future Secretaries of State (and the parents worrying about their college choices) here's my Top Ten Things that Future International Policy Wonks Should Learn. 1.

23 Body Language Tricks That Make You Instantly Likeable You send people signals all day, without paying attention to them. The way you move your eyes, the way you shake a hand and so on. There are things you can do to send subconscious signals using body language that make people like you better, or at least give you the benefit of the doubt. 12 Motivational Habits To Make You Successful Happy And Productive Your habits are key if you want to be successful. Image Source: Books with benefits Success doesn’t come easily to everyone; it requires hard work, determination, and persistence.

Ancient_wisdom.html Come, put your mundane concerns aside for awhile and cross the threshold to explore the Wisdom of the Ages. Click on above banner for catalog and order information This site is an ongoing project which will be updated regularly-- 17 Books To Read If You Want To Become A Billionaire Success is magnetic. As a species, we’re constantly studying how it happens, why it happens, who has achieved it for themselves, and how we can obtain it. One thing is for sure: money is an echo of value. 12 Powerful Habits I Have Stolen from Ultra Successful People (Photo: Tomaslau.com) (Photo: Tomaslau.com) As you may already know I am very curious about habits, behavior psychology and how it all affects success. For over two years I have been experimenting with my routines, work and lifestyle to find that perfect fit for happy and productive, purpose and passion driven routine. In this article, I’d like to share some of my recent powerful habits I’ve been developing and experimenting with that I have stolen from ultra successful people.