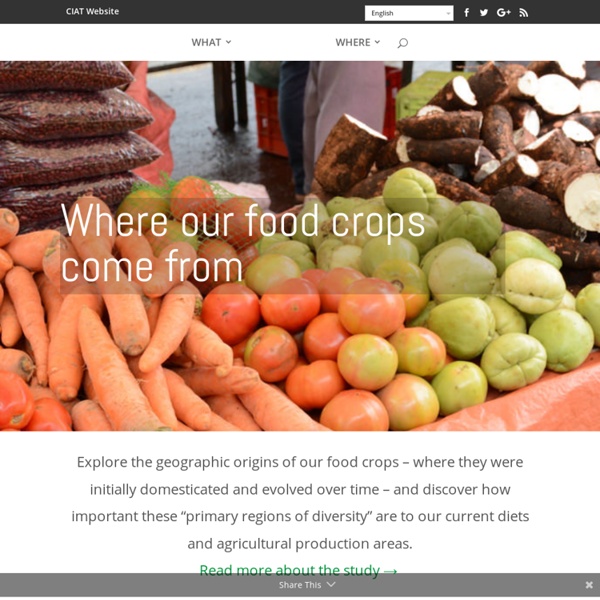 by Colin K. Khoury, Harold A. Achicanoy, Carlos Navarro-Racines, Steven Sotelo, and Andy Jarvis at the International Center for Tropical Agriculture (CIAT). Version 1.0 (May 2016). This work is licensed under a Creative Commons Attribution 4.0 International (CC BY 4.0). This work is associated with the publication: Khoury CK, Achicanoy HA, Bjorkman AD, Navarro-Racines C, Guarino L, Flores-Palacios X, Engels JMM, Wiersema JH, Dempewolf H, Sotelo S, Ramírez-Villegas J, Castañeda-Álvarez NP, Fowler C, Jarvis A, Rieseberg LH, and Struik PC (2016). About the circular plots Each region has a color representing its own “native” crops and those colors are connected to other regions due the importance of those crops in the diets/agricultural production in other regions. Methods and code for the plots were derived from The Global Flow of People by Nikola Sander, Guy J. About the data

Map Explorer Explore maps of future climate as simulated by individual climate models. IMPORTANT: When viewing and using results from individual climate models, it is imperative that you also take account of the range in the climate projections. If you have not already done so, we encourage you to use the Climate Futures approach to identify two or three models that capture the range of results relevant to your application. More information can be found in the Climate Campus here . Initially, the map shows just the four NRM Super-Clusters . Users who wish to see maps of multi-model results should refer to the Technical Report and Cluster Reports .

Insécurité alimentaire et changement climatique (FAO) Background science This website allows you to explore how different scenarios of global greenhouse gas emissions and adaptation to climate change could change the geography of food insecurity in developing and least-developed countries. The website maps an index of vulnerability to food insecurity at national level. 40 Maps They Didn’t Teach You In School By the time we graduate high school, we learn that they never taught us the most interesting things in there. Sure, you might be able to name the European countries or point New York on the map, but does that give a you real understanding of how the world functions? To fill this gap, we have gathered a great and informative selection of infographical maps that they should’ve shown us at school: every single one of these maps reveals different fun and interesting facts, which can actually help you draw some pretty interesting conclusions. [Read more...] What makes infographical maps so engaging is how easy it becomes to conceive graphically presented information. The best part, there are brilliant services like Target Map that “allow everyone (from individuals to large organizations) to represent their data on maps of any country in the world and to share their knowledge with the whole Internet Community.”

8513 25Share1 Click to enlarge Get rich quick schemes rarely go according to plan, so unfortunately you're going to have to do some work if you want to make it big. Still, if you want to get the most bang for your buck, you might want to check out what state is going to pay you the most for the same job. Business Insider found the jobs that make the most money in each state versus the national average. Map of ‘vegetarian friendliness’ (number of vegetarian restaurants) in Europe by country Tip: See my list of the Most Com­mon Mis­takes in Eng­lish. It will teach you how to avoid mis­takes with com­mas, pre­pos­i­tions, ir­reg­u­lar verbs, and much more (PDF Ver­sion). The ori­ginal idea of this art­icle was to cre­ate a map show­ing the per­cent­age of pop­u­la­tion fol­low­ing a ve­get­arian diet, but it turned out to be im­possible to find a re­li­able source of data for more than a hand­ful of coun­tries. Since there is cor­rel­a­tion between sup­ply and de­mand, I de­cided to cre­ate a map of the sup­ply part in­stead (which, however, is af­fected by many other factors than just the per­cent­age of ve­get­ari­ans, e.g. tour­ism and over­all wealth).

Population growth & regional internal migration in your area 2013-2014 Melbourne is expected to overtake Sydney as Australia’s largest city by 2056, as parts of Australia face higher growth rates than others. The average population growth rate across Australia is 1.6 per cent, data from the Australian Bureau of Statistics shows. However, the populations of some districts are shrinking while others have growth rates more than 10 per cent. The suburb of Truganina, part of Greater Melbourne, saw a 16.8 per cent population growth in 2013-14. The district of Anglesea, 90km away, saw its population decline 3.3 per cent. Mongolia Adopts An Innovative System of 3-Word Locations The idea is simple enough. Wouldn’t locations be easier to remember if we traded in complicated GPS coordinates for simple and memorable three-word phrases? That’s the idea behind what3words, a new system that—in the words of Big Think’s Frank Jacobs in his entertaining article on the system—is “doing for geolocation what domain names did for IP addresses.” That is, make them easier to share and to remember. (Read Frank’s article—it’s fun.) what3words has divided up the earth into 57 trillion three-by-three-meter squares and created an algorithm to assign each one a three-word name.

International Development - NGIS This project trained 195 people from 95 organisations to enhance the capacity of Tonga, Papua New Guinea, Vanuatu and Samoa to undertake assessments of inundation exposure to key settlements and infrastructure at risk from sea level rise through the provision of critical baseline data, improved GIS capacity, and implementation of coastal inundation modelling. The software and online spatial tools delivered as part of this project enabled maps to be printed and laminated for presentations to local communities. These flood maps provided an important mechanism for informing communities of their potential risk. The online tools and maps were integrated into the education systems in each country so that the younger generation can understand the impacts of coastal inundation. Without these maps it would have been extremely difficult for the government departments to communicate the climate change risk to their citizens and communities.