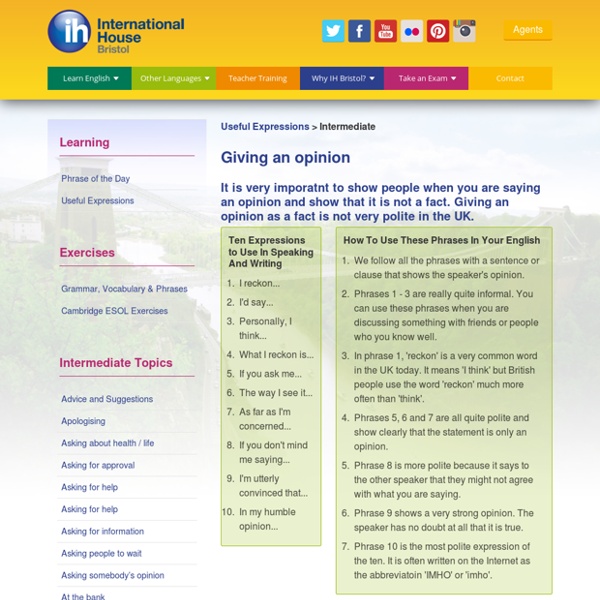 Speech Analysis: How to Critique a Speech Published: Jan 18th, 2008 Studying other speakers is a critical skill, one of the 25 essential skills for a public speaker. The ability to analyze a speech will accelerate the growth of any speaker. The Speech Analysis Series is a series of articles examining different aspects of presentation analysis. Be a better writer in 15 minutes: 4 TED-Ed lessons on grammar and word choice There’s no denying it — the English language can be mighty tricky. When writing a paper, a novel or even an e-mail, you might look at a sentence you just wrote and think, “Is that comma supposed to be there?” or “Is that really the best word to use?” Fear not! TED-Ed has put together a list of four of our favorite grammar and language lessons to get your next piece of writing in tip-top shape.

Engage Now - Student Interactions - teacher heath Do you hear your students say things like: "No! That's Wrong!" How to Get Your Students Writing with Only 6 Words We’ve all been told we need to bring writing into our art rooms. But, it can be difficult to find both the time and a way to create a meaningful connection between the two disciplines. A few years ago, I came across the idea of 6-word stories and decided to give them a try in my classroom.

BusyTeacher.org It’s only natural. After all, they are trying to talk in a language they are still working on learning. Still, silence can be deadly in the ESL classroom for your students and you. When you want to get your students to speak up, try one of these fun and simple games to get them talking in class. Welcome to English, step 3-4 (Spring 2015) Conjunctions and subjunctions combine clauses. What is a clause? It´s part of a sentence. There are two types of clauses: 1. Independent clause = huvudsats Nobel Prize Awarded Women Ada Yonath, Nobel Laureate in Chemistry 2009, in conversation with His Majesty King Carl XVI Gustaf of Sweden at the Nobel Banquet, 10 December 2009.Copyright © The Nobel Foundation 2009 Photo: Orasisfoto Youyou Tu, Nobel Laureate in Physiology or Medicine 2015, on stage with her family after the Nobel Prize award ceremony on 10 December 2015.Copyright © Nobel Media 2015 Photo: Alexander Mahmoud Svetlana Alexievich, Nobel Laureate in Literature 2015, presenting her gift to the Nobel Museum's collection: one of her five tape recorders, on 6 December 2015.Copyright © Nobel Media 2015 Photo: Alexander Mahmoud May-Britt Moser, Nobel Laureate in Physiology or Medicine 2014, after receiving the news about the Nobel Prize.Photo: Nancy Bazilchuk, NTNU Communication Div. Elizabeth Blackburn, Nobel Laureate in Physiology or Medicine 2009, in her lab at the University of California, San Francisco.Copyright © University of California, San Francisco 2009 Photo: Elisabeth Fall/fallfoto.com

Disney's 'Brave' Video Writing Prompts K-2: Princess Comparison When you think of a prince or princess, what do they usually look and act like (either write out or draw your answer)? How are Merida and her brothers different from your original picture? 3-5: Family Expectations