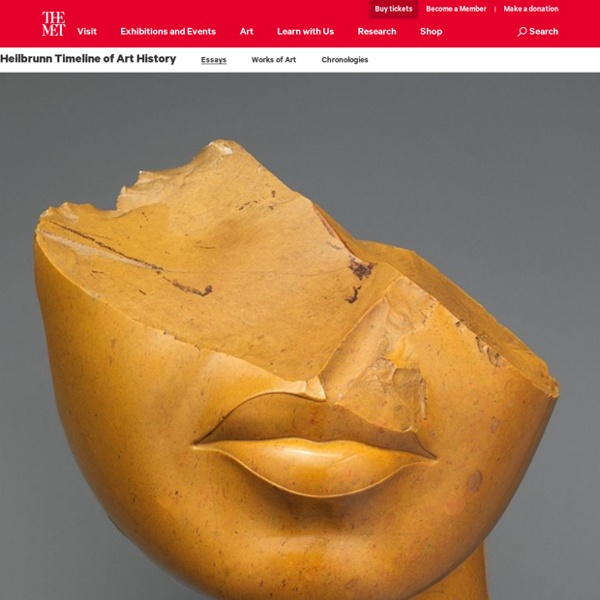 The Magic Mushrooms Grower's Guide Updated 11-16-2003 Widely acclaimed as the best and most comprehensive growing guide for the first time cultivator anywhere on the web. You be the judge! This document may be freely copied and distributed so long as the following conditions are met: This document provides complete directions for cultivating psilocybin mushrooms in your home. The strain this guide is intended to help you grow is Psilocybe cubensis (Amazonian strain) mushrooms. Internet History Sourcebooks Update Information 2006: In 2006 the Internet Medieval Sourcebooks and associated sourcebooks are undergoing a major overhaul to remove bad links and add more documents. 1. This project is both very large and fairly old in Internet terms. At the time it was instigated (1996), it was not clear that web sites [and the documents made available there] would often turn out to be transient.

Heilbrunn Timeline of Art History Educator Review What's It Like? The Metropolitan Museum of Art's Heilbrunn Timeline of Art History highlights the New York-based museum's extensive collection, ranging from 8,000 B.C. to current-century fashion. Its content is written by Met curators, conservators, scientists, and educators and includes 930 essays and nearly 7,000 objects to view.

the Solomon R. Guggenheim Museum : Free Texts : Download & Streaming the Solomon R. Guggenheim Museum by Kandinsky, Wassily, 1866-1944; Dearstyne, Howard, tr; Rebay, Hilla, 1890-1967, ed texts The Visual Elements of Art The Visual Elements - Pattern PAUL KLEE (1879-1940) Dream City, 1921 (warercolor and oil) Pattern is made by repeating or echoing the elements of an artwork to communicate a sense of balance, harmony, contrast, rhythm or movement. There are two basic types of pattern in art: Natural Pattern and Man-Made Pattern. Both natural and man-made patterns can be regular or irregular, organic or geometric, structural or decorative, positive or negative and repeating or random.

The Warfare of Science With Theology Introduction by Andrew White Note:* In the final computerized version of this work all footnotes will follow immediately after the asterisk (*) and not at the bottom of the page as in the printed volumes. These notes will be between lines at the top and bottom (the same as this note) and we suggest these notes be skipped over when reading for general information. This is necessary to prevent the notes from being misplaced in the various electronic formats this work will be transfered into.

An Introduction to 100 Important Paintings with Videos Created by Smarthistory If you have an interest in how the internet has widened the very concept of education, you may well know about Google's Art Project, a digital wealth of free visual art information and viewing opportunities we've featured before. And you more than likely know about Khan Academy, the highest-profile producer of educational videos on the internet. Now, from the combined power of their learning resources comes this collection of video introductions to over 100 important paintings. Ranging from between two to nine minutes and covering works of art created in eras from 575 B.C.E to the Second World War, these brief but intellectually dense and visually rich lessons bear the label of Smarthistory, "a multimedia web-book about art and art history" that merged with Khan Academy in 2011. Just above, we have Vincent van Gogh's 1889 The Bedroom, a painting that, in the words of the artist himself, "ought to rest the brain — or rather, the imagination." Related Content:

The Met Just Released 375,000 Priceless Artworks into the Public Domain Edgar Degas, The Dancing Class, 1870, Oil on wood, 7 3/4 x 10 5/8 in. The Metropolitan Museum of Art unloaded a massive chunk of its collection into the public domain on Tuesday, making them available for anyone with an internet connection to use or simply appreciate. As part of a new Open Access Policy, the Met designated 375,000 images with the Creative Commons Zero 1.0 Universal copyright, the broadest possible. Impressionist masters like Cézanne, Monet, and Degas, Japanse woodblock print artists like Hokusai, sculptors like Rodin, and thousands more are available for anyone to "copy, modify, distribute, and perform the work, even for commercial purposes, all without asking permission," according to the Creative Commons.

The Metropolitan Museum of Art's Heilbrunn Timeline of Art History is a chronological, geographical, and thematic exploration of the history of art from around the world as illustrated by the museum's collection. Browse by work of art, timeline, thematic essay, and more. by nda_librarian Apr 28