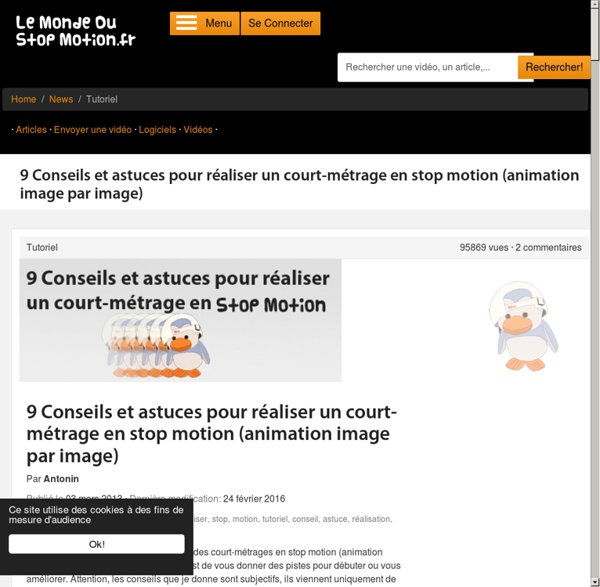 New Theories of the Short Film: A Conversation with Dr. Richard Raskin What makes a short film a short film? If you asked us a month ago, we might have told you that a short film’s defining characteristic is, well, its shortness. But not anymore. For the past few weeks, we’ve been trading emails with Dr. Richard Raskin, a professor at Aarhus University in Denmark, and one of the most brilliant and active short-film theorists in the world. Photo Gallery Photo Gallery I have fabricated many armatures over the years but unfortunately I was not able to record every project with a camera. Deadline schedules were usually, very incredibly short and there was no time at all to properly photograph my work.

the Scarlet Letters: coraline puppet technology - with photos! you are here [x]: Scarlet Star Studios > the Scarlet Letters > coraline puppet technology - with photos! << before the cauldron of fiction after >> coraline's technical innovations in historical context coraline puppet technology - with photos! by sven at 4:43 pm puppet heads How to shoot video with a DSLR camera DSLR cheat sheet Full disclosure: the Canon 5D Mark III is not a video camera. It's actually a still camera that just happens to also capture video. But there are some incredible advantages to using this camera over a traditional video camera: It's small and really light.Its interchangeable lenses increase versatility and inspire artistic and creative shots.It's easy to produce a shot with a shallow depth of field (background out of focus).It's incredible in low light and variable lighting conditions.

Wooonderful Stop-Motion: puppet making Just as every puppet is conceived for a certain type of action, a mould is very much made regarding what you're going to use it for: are you going to cast silicon, or press-mold some clay in it...?As a rule: if you want the cast to be soft, use a hard mould (= plaster…), and if the cast is hard, use a soft mould.This being said, the main thing with mould is patience: you might have to redo them quite a few time before you reach perfection (or at least something decent) Once you have your platicine sculpture ready, dip the part you don’t want to cast right now (we’re doing a several part mould here) in clay (=loam: the one used to make pots)

How to Use a DSLR to Shoot High Quality Videos If you are like many professional photographers, you may be finding that more and more clients are asking if you can also do video for them when you’re on-site doing a photo shoot. Video can be a “strange new world” and you may be passing up some good opportunities. Most modern DSLRs are quite competent in shooting video, and you can use them to create industrial and commercial productions that are ideally suited for use at corporate functions, in sales presentations, as training aids, and as promotional spots on YouTube…so there is a great opportunity to expand your service offering by including video. Without a doubt, shooting video with a DSLR can be more complicated than shooting stills, but you can achieve beautiful, creative results by following a few, simple guidelines. And, while you may add more video-related gear over time, you can make some initial, fairly modest investments and get into video production without having to break the bank.

Beginner’s Guide to Doing DSLR Video Clips The video function on your camera is probably one that you don’t play with very often. It’s often disregarded – after all, DSLR cameras are not exclusively video cameras are they? But did you know that some big budget films, including The Avengers, have scenes shot on DSLR cameras? In fact, The Avengers used the Canon EOS 5D Mark II and 7D cameras on the set!

A photographer's intro to the world of video: Digital Photography Review It took me a long time to recognize the appeal of video shooting. Even in a job where I have to use a camera’s video features, it was only fairly recently that I moved beyond just taking short clips (essentially stills with a little bit of movement in them) and started to think in terms of using video and editing to tell stories. Given that most modern cameras offer at least rudimentary video tools, I wanted to share my experiences and perhaps encourage others to start thinking about shooting at 24 or more frames per second.