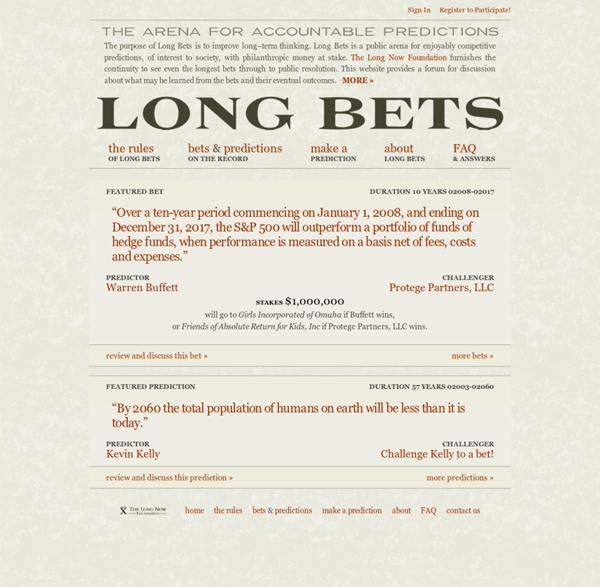 Imagining the Internet Latest Project: The 2014 Hall of Fame interviews, recorded in Hong Kong Hall of Famers share wisdom Imagining the Internet sent a team to the Internet Society's 2014 Internet Hall of Fame induction in Hong Kong to gather interviews with 28 top global Internet leaders. View four hours of interviews plus the Induction Ceremony and a panel discussion and a forum on the open Internet. 20 Tech Trends That Will Define 2013, Selected By Frog Yes, it’s already that transitional time when our current year ends and another begins, and today and tomorrow are quickly changing hands. Rather than look back at significant trends of the past 366 days (2012 was a leap year, remember?), we asked a wide variety of technologists, designers, and strategists across Frog’s studios around the world to take a look to the future. The near future, that is. “Near” in that 2013 is not only upon us, but also “near” in that these technologies are highly feasible, commercially viable, and are bubbling up to the surface of the global zeitgeist.

Library : The Erowid Review » An Interesting Format, But the Content Could Have Been Better Have you ever had a friend introduce you to someone because he or she felt that, given your mutually obscure interests, you had a lot to talk about? Have you ever had one of those conversations that inspire more and more thoughts as it goes on and on? This book reads like just such a conversation. Ralph Abraham, Terence McKenna and Rupert Sheldrake were introduced to each other through friends that felt they would have a lot to talk about with each other, and indeed they did. The Top 100 Items to Disappear First - StumbleUpon by Mr. Smashy Survival Cache You could also call this “The Top 100 Things You should start stocking up on.”

Ticket to the top Are you mad? Don't consider anything else! Economics and business are THE BEST degrees to do at university. Why study this area? There are a lot of good reasons. Mempile - Terabyte on a CD Revolutionary new optical-storage technology currently under development will allow the equivalent of 250,000 high-quality MP3s or more than 115 DVD-quality movies and about 40 HD movies on a single CD-size medium. At 200 layers a disc, future versions of the technology will make it possible to store up to 5TB of data on one disc—the only question is, when will we find the time to watch all this content? Optical storage – a brief history has already briefly covered the early days of digital storage and the development of the first hard drives by IBM in the 1950s. Optical storage as we know it today required the culmination of several technologies that came into fruition at the start of the 1980s. One of the most important steps toward the creation of modern optical storage was the invention of the laser.

The 12 Trends That Will Rule Products In 2013 Near the end of 2012, a group of us at Ziba got together to review what we’d learned over the course of the year. Working with dozens of clients who serve customers around the world, we designers spend a lot of time observing people as they interact with technology, services, and experiences, noticing how they seek solutions to everyday problems and make decisions. In the process, certain patterns emerge so forcefully that they’re practically unavoidable. Ralph Abraham Ralph H. Abraham (b. July 4, 1936, Burlington, Vermont) is an American mathematician. He has been a member of the mathematics department at the University of California, Santa Cruz since 1968. Life and work[edit] Ralph Abraham earned his Ph.D. from the University of Michigan in 1960, and held positions at UC Santa Cruz, Berkeley, Columbia, and Princeton.

9/11 inside job 9/11 Truth movement are idea’s that disagree with the widely accepted account that the September 11 attacks were perpetrated solely by al-Qaeda, without any detailed advanced knowledge on the part of any government agency. Proponents of these theories claim there are inconsistencies in the official conclusions, or evidence which was overlooked. In a 2008 global poll of 16,063 people in 17 countries, majorities in only nine countries believe al Qaeda was behind the attacks. 46% of those surveyed believed al-Qaeda was responsible for the attacks, 15% believed the U.S. government was responsible, 7% believed Israel was and another 7% believed some other perpetrator, other than al Qaeda, was responsible. The poll found that respondents in the Middle East were especially likely to name a perpetrator other than al-Qaeda. In Memory

How the Stock Market and Economy Really Work - Kel Kelly "A growing economy consists of prices falling, not rising." The stock market does not work the way most people think. A commonly held belief — on Main Street as well as on Wall Street — is that a stock-market boom is the reflection of a progressing economy: as the economy improves, companies make more money, and their stock value rises in accordance with the increase in their intrinsic value. Black Holes in Star Clusters Stir Time and Space Astronomers at the University of Bonn’s Argelander-Institut fuer Astronomie have recently published a study that suggests novel techniques to simulate the movement of black holes in star clusters, providing a new method to detect the merging of black holes. Their idea might be the basis for a future field called “gravitational wave astronomy”. The common premise is that most stars are born in clusters, evidently forming the massive star sets we call galaxies. The smallest, looser “open clusters” have only a few stellar members, and the largest, tightly bound ”globular clusters” have as many as several million stars.