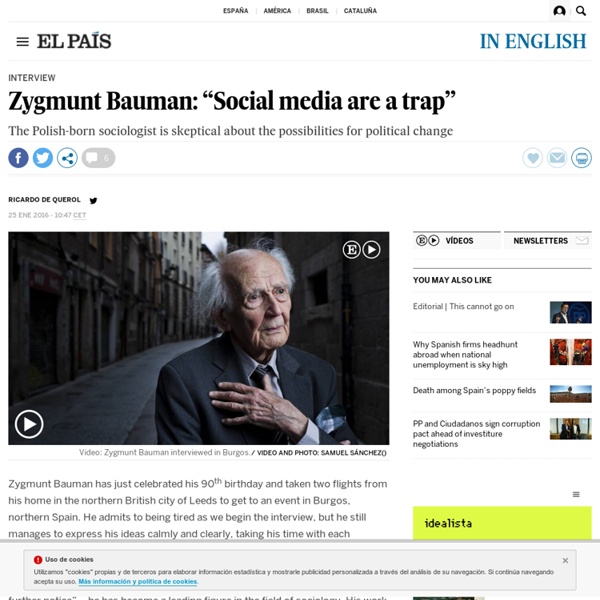 Zygmunt Bauman has just celebrated his 90th birthday and taken two flights from his home in the northern British city of Leeds to get to an event in Burgos, northern Spain. He admits to being tired as we begin the interview, but he still manages to express his ideas calmly and clearly, taking his time with each response because he hates giving simple answers to complex questions. Since developing his theory of liquid modernity in the late 1990s – which describes our age as one in which “all agreements are temporary, fleeting, and valid only until further notice” – he has become a leading figure in the field of sociology. His work on inequality and his critique of what he sees as the failure of politics to meet people’s expectations, along with a highly pessimistic view of the future of society, have been picked up by the so-called May 15 “Indignant” movement in Spain – although he has repeatedly highlighted its weaknesses. QUESTION. You have described inequality as a “metastasis.” Q.

Social Theory Rewired Cultural Capital While he didn’t consider himself a Marxist sociologist, the theories of Karl Marx heavily influenced Bourdieu’s thinking. Marx’s influence is perhaps most evident in Bourdieu’s theory of cultural capital. Like Marx, Bourdieu argued that capital formed the foundation of social life and dictated one’s position within the social order. For Bourdieu and Marx both, the more capital one has, the more powerful a position one occupies in social life. However, Bourdieu extended Marx’s idea of capital beyond the economic and into the more symbolic realm of culture.

A New Era of Global Protest Begins Protesters demonstrate against austerity in London, June 20, 2015. (Photo: D B Young / Flickr) Research by Dr. David Bailey provides empirical evidence for what many activists and campaigners have long suspected: that we have entered a prolonged period of dissent characterised by an escalation in the magnitude and diversity of public protest. Stuart Elden: Confessio - berfrois Legend of St Francis: 27. Confession of a Woman Raised from the Dead, Master of Saint Cecilia, 1300 by Stuart Elden Du gouvernement du vivants: Cours au Collège de France 1979-80, edited by Michel Sennelart, Paris: Gallimard/Seuil, 2012; translated by Graham Burchell as On the Government of the Living: Lectures at the Collège de France 1979-80, London: Palgrave, 448 pp.

Five-Minute Film Festival: TED Talks for Teachers This week's announcement of a new initiative called TED-Ed caused a flurry of excitement about the new videos TED is creating to spread powerful lessons beyond the classroom walls. It's not just a new home for education-related TED videos; it's a call to action -- anyone can nominate an outstanding teacher or suggest a fantastic lesson, and the TED team will work with the educators chosen to record and then animate those lessons. You can already see the first few of these gems on the TED-Ed YouTube Channel.

A Practical Utopian’s Guide to the Coming Collapse What is a revolution? We used to think we knew. Revolutions were seizures of power by popular forces aiming to transform the very nature of the political, social, and economic system in the country in which the revolution took place, usually according to some visionary dream of a just society. Nowadays, we live in an age when, if rebel armies do come sweeping into a city, or mass uprisings overthrow a dictator, it’s unlikely to have any such implications; when profound social transformation does occur—as with, say, the rise of feminism—it’s likely to take an entirely different form. It’s not that revolutionary dreams aren’t out there. Simone de Beauvoir Interview and photography The interview took place in Miss de Beauvoir’s studio on the rue Schoëlcher in Montparnasse, a five-minute walk from Sartre’s apartment. We worked in a large, sunny room which serves as her study and sitting room. Shelves are crammed with surprisingly uninteresting books.

See inside Buckingham Palace as Google and YouTube take the public on a 3D tour Visitors can stand at the bottom of the grand staircase and, although not able to move, have an almost 360-degree view of the architectural wonder. They can also look down the picture gallery at the Old Masters such as Canaletto hanging on the walls, then turn around to see paintings behind them. Other highlights include tours of the lavishly decorated Green and White drawing rooms and the ballroom - where knighthoods and OBEs are presented by the Queen during investitures - all accompanied by a virtual tour guide. It follows similar "indoor Streetview" projects which have taken visitors inside the British Museum, Royal Shakespeare Company and galleries around the UK. Google is behind the project and it has created a similar experience for schools under its Expedition pioneer programme, but instead of having a virtual guide, teachers dictate the tour and highlight interesting topics for pupils.

Work and Pleasure: Theodor Adorno on the Psychology of “Gadgeteering” and How the Cult of Efficiency Limits Our Happiness Few thinkers have advanced our understanding of the machinery we call popular culture more than the great German sociologist, philosopher, musicologist, and media critic Theodor Adorno (September 11, 1903–August 6, 1969). In the 1950s, Adorno embarked upon a rather unusual project: He began analyzing the horoscopes published in the Los Angeles Times as an inquiry into “the nature and motivations of some large-scale social phenomena involving irrational elements … fused with what may be dubbed pseudo-rationality.” From these investigations, eventually published as The Stars Down to Earth and Other Essays on the Irrational in Culture (public library), sprang expansive and enduring insight into many of the myths that bedevil modern culture and still limit our lives on a daily basis.

MINDFUL PLEASURES: Poetry after Auschwitz: What Adorno Really Said, and Where He Said It Gore Vidal remarks somewhere upon the irony that George Santayana is remembered today only for his warning about forgetting. (All who remember Santayana are doomed to repeat that those who do not remember history are doomed to repeat it.) Theodor Adorno seems to have suffered a similar fate, remembered by most nonspecialists only as a German gloom-meister who pronounced that after Auschwitz, poetry could no longer be written. Few realize that what Adorno actually wrote was more complex and subject to revision in his later work. The original quote (always taken out of context and rarely footnoted) occurs in the concluding passage of a typically densely argued 1949 essay, "Cultural Criticism and Society," reprinted as the first essay in Prisms.

Creativity is rejected: Teachers and bosses don’t value out-of-the-box thinking. Illustration by Rob Donnelly In the United States we are raised to appreciate the accomplishments of inventors and thinkers—creative people whose ideas have transformed our world. We celebrate the famously imaginative, the greatest artists and innovators from Van Gogh to Steve Jobs. Viewing the world creatively is supposed to be an asset, even a virtue.