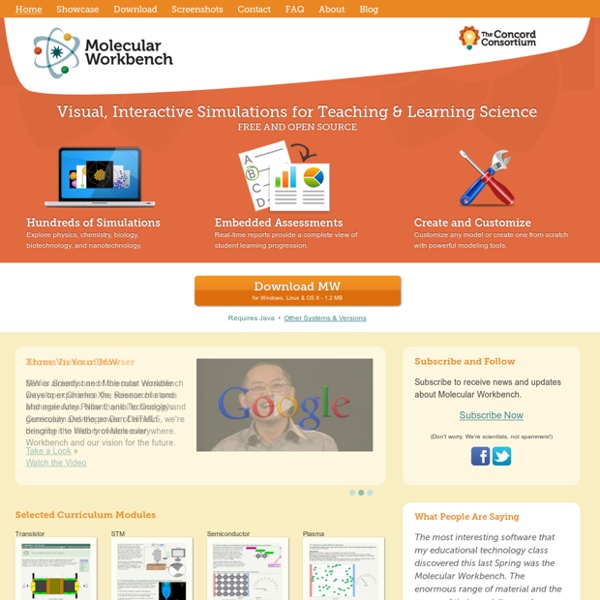 NCEA Subject Resources Subject resource pages are available for the following subjects: Ringa Toi Exhibition Ringa Toi is an annual exhibition that showcases the artwork of secondary school students with a focus on Toi Māori. Frostbite Theater Welcome to Frostbite Theater, a collection of science videos produced by Jefferson Lab! Liquid Nitrogen Experiments Have you ever wanted to play with liquid nitrogen, but didn't happen to have any lying around the house? No problem! We did the experiments and filmed them for your viewing pleasure! Liquid Oxygen vs.

Solar System Science Fair Project Science Fair Projects Solar System 3D Simulator is a FREE software application that generates a realistic solar system model and planets in 3 Dimension on the PC using advanced physics formulas. It can display the planets and their orbits, the sun and the moon. The nine planets including planet earth and their detailed physical & chemical information and image pictures is also displayed including solar power, solar energy and solar eclipse details. The graphical output is in high-resolution 3D full color format and the orbit view can be adjusted and the orbits tilted & rotated to any angle. The speed of the solar system can also be varied.The Solar System model is useful for learning about the physics of the universe, astronomy, science projects & science experiments interactively for both adults and kids. Students of Elementary, Middle and High School can use it for science fair projects ideas, physics help, science news & creating science articles.

20 Great YouTube Channels for Math Teachers December 28, 2017 For those of you teaching math, here is a collection of some of the best YouTube channels we reviewed this year. You can draw on these resources to access and find educational video content to help you in the teaching of math for different grade levels. Some of these channels are set up and run by math teachers and others by popular math websites. You may want to go through the collection and see what works for you. Links to the channels are under the visual. The Franklin Institute's Resources for Science Learning This presentation of The Franklin Institute's Case Files highlights individuals from the history of science and technology. It is one of many Resources for Science Learning. Each thematic group of Files presented at left begins with commentary from a distinguished historian of the discipline. About The Case Files The Franklin Institute's Case Files are a unique repository in the history of science and exist as the documentary record of The Franklin Awards program which, since 1824, has recognized outstanding scientific achievement, across all scientific disciplines. Within each Case File is a story, waiting to be told, of scientific enterprise and social circumstances.

ACD/ChemSketch for Academic and Personal Use ACD/ChemSketch Freeware is a drawing package that allows you to draw chemical structures including organics, organometallics, polymers, and Markush structures. It also includes features such as calculation of molecular properties (e.g., molecular weight, density, molar refractivity etc.), 2D and 3D structure cleaning and viewing, functionality for naming structures (fewer than 50 atoms and 3 rings), and prediction of logP. The freeware version of ChemSketch does not include all of the functionality of the commercial version. Visit ACD/ChemSketch to learn more about the commercial version. USA Hands-On Universe USA-HOU is hosting the Global HOU conference this year at Western Kentucky University in Bowling Green, Kentucky, 15-21 August 2017, in the path of totality of the 21 August 2017 American Solar Eclipse! See the conference website and list of participants (not all on the list actually attended). See maps of the eclipse’s path of totality. Hands-On Universe (HOU) is an educational program that enables students to investigate the Universe while applying tools and concepts from science, math, and technology.

80 Open Education Resource (OER) Tools for Publishing and Development Initiatives Many Open Education Resources (OER) have been introduced by governments, universities, and individuals within the past few years. OERs provide teaching and learning materials that are freely available and offered online for anyone to use. Whether you’re an instructor, student, or self-learner, you have access to full courses, modules, syllabi, lectures, assignments, quizzes, activities, games, simulations, and tools to create these components. While some OERs include OpenCourseWare (OCW) or other educational materials, they may also offer the means to alter those courses through editing, adding to those courses through publication, and the ability to shape the tools that share those resources. Additionally, they may maintain forums or other platforms where individuals can collaborate on building educational tools and documentation and the reach for those materials.