Atlas for a Changing Planet 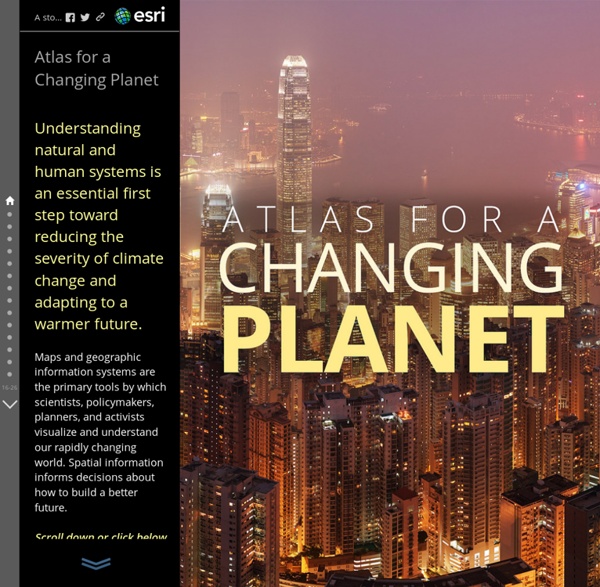 Understanding natural and human systems is an essential first step toward reducing the severity of climate change and adapting to a warmer future. Maps and geographic information systems are the primary tools by which scientists, policymakers, planners, and activists visualize and understand our rapidly changing world. Spatial information informs decisions about how to build a better future. Scroll down or click below to explore a sampling of maps from Esri's ArcGIS Online resource on these themes: 1. Understanding Natural Systems 2. 3. 4. 5. Photo by DAVID ILIFF. Tap for details Swipe to explore Tap to get back to the Map Swipe to explore For hundreds of millions of years, carbon has cycled through the Earth and its atmosphere, oceans, and biosphere. Click on the map for details. Source: European Space Agency (ESA) Climate Change Initiative (CCI) Forests are a carbon sink—they absorb more carbon than they release via photosynthesis. > Click here to see forest loss Source: Esri, Mark J.

World Population: The fall of Asia and the rise of Africa Population of the World, 1800-2100* country size = share of world population * 2100 population figures are projections from the UN’s Population Division gif version For thousands of years, Asia has been the population center of the world. 32 maps that will teach you something new about the world EVER THOUGHT TO YOURSELF, “How many smaller countries could you fit into Australia?” Or possibly, “Which countries in the western hemisphere have legit secessionist movements?” Or, perhaps most pressing of all, “Where does it pay best to be a lifeguard?”

indy100.independent.co The official campaign period for the upcoming EU referendum begins on April 15th. But as all of us poor b-----ds already know, Brexit stats trying to persuade us to vote In or Out are already flying about all over the place. If you're already tired of the Brexit rhetoric, indy100 has taken a look back at our own data from stories about Europe to date.

The #1 reason people die early, in each country You're probably aware that heart disease and cancer are far and away the leading causes of death in America. But globally the picture is more complicated: (Vox / Anand Katakam and Joss Fong) It's worth stressing that "cause of lost years of life" and "cause of death" aren't identical. For example, deaths from preterm births may cause more lost years of life in a country than deaths from heart disease even if heart disease is the leading cause of death. 5 tip, der gør dine Google Fusion kort bedre - Kaas & Mulvad Du har lavet dine første kort i Google Fusion. De virker, som de skal – og hvad så? Jo, der er mange måder, man kan forbedre sine kort på. Mange små tricks, der hver for sig kan få kortet til at blive bare – lidt – mere lækkert og velfungerende.

9 Excellent Free Map Creation Tools for Teachers and Students 1- Umapper UMapper is a great mapping tool for educators. It allows its users to create and manage interactive maps and geogames online. Michael Pecirno's Minimal Maps Single Out American Land Use Patterns Most maps of the U.S. prioritize metropolitan areas. But "Minimal Maps" single out the nation's forests, crops, and waterbodies. Eighty percent of the U.S. population lives in "urban" areas, a staggering 249,253,271 souls. Yet these folks live in just 3 percent of the country's 2.3 billion acres of land.

Everything Sings - Siglio Press Intro by Ira Glass, essays by Albert Mobilio and Ander Monson, interview by Blake Butler. That a cartographer could set out on a mission that’s so emotional, so personal, so idiosyncratic, was news to me. —IRA GLASS, host of This American Life, from his introduction to Everything Sings. Iconoclastic geographer Denis Wood has created an atlas unlike any other. He surveys his small, century-old neighborhood Boylan Heights in Raleigh, North Carolina by first paring away the inessential (scale, orientation, street grids), then by locating the revelatory in the unmapped and unmappable: radio waves permeating the air, the paperboy’s route in space and time, the light cast by street lamps, Halloween pumpkins on porches. Wind Map An invisible, ancient source of energy surrounds us—energy that powered the first explorations of the world, and that may be a key to the future. This map shows you the delicate tracery of wind flowing over the US. The wind map is a personal art project, not associated with any company. We've done our best to make this as accurate as possible, but can't make any guarantees about the correctness of the data or our software.

40 maps that explain the world By Max Fisher By Max Fisher August 12, 2013 Maps can be a remarkably powerful tool for understanding the world and how it works, but they show only what you ask them to. So when we saw a post sweeping the Web titled "40 maps they didn't teach you in school," one of which happens to be a WorldViews original, I thought we might be able to contribute our own collection. How to make awesome interactive map using Google Sheets in under 1 minute? - Geoawesomeness From time to time you need to very quickly make a choropleth map based on a spreadsheet. There are a lot of different ways to do it but most of them require registering in one of the mapping services, having Excel plugin or a GIS software installed. The easiest, fastest and free environment allowing you to make a simple and interactive map is Google Sheets (web-based competitor to MS Excel offered by Google). The map below shows data about life expectancy per country in 2015 and it took me around the 30 seconds to make it (hover over to see that data per country):