The tardigrade genome has been sequenced, and it has the most foreign DNA of any animal 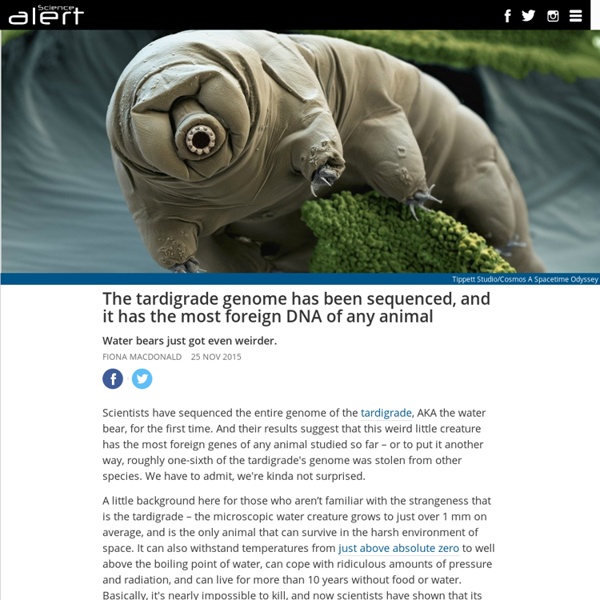 Scientists have sequenced the entire genome of the tardigrade, AKA the water bear, for the first time. And their results suggest that this weird little creature has the most foreign genes of any animal studied so far – or to put it another way, roughly one-sixth of the tardigrade's genome was stolen from other species. We have to admit, we're kinda not surprised. A little background here for those who aren’t familiar with the strangeness that is the tardigrade – the microscopic water creature grows to just over 1 mm on average, and is the only animal that can survive in the harsh environment of space. It can also withstand temperatures from just above absolute zero to well above the boiling point of water, can cope with ridiculous amounts of pressure and radiation, and can live for more than 10 years without food or water. Basically, it's nearly impossible to kill, and now scientists have shown that its DNA is just as bizarre as it is.

Nature Anatomy: A Glorious Illustrated Love Letter to Curiosity and the Magic of Our World “A writer is a professional observer,” Susan Sontag noted in her spectacular lecture on literature. So is any great storyteller — including the artist. After turning her professional-observer powers and their visual record to the city and the farm, illustrator extraordinaire Julia Rothman now directs them at what Virginia Woolf believed was the source of all the arts: nature. In Nature Anatomy: The Curious Parts and Pieces of the Natural World (public library), she fuses the curious scrutiny of science with the loving gaze of art to explore everything from sunsets to salamanders, ferns to feathers, mountains to mushrooms, and the whole enchanting aliveness in between. Rothman — who also dreamt up the most generous book in the world — embraces the natural world with the same generous attention to its monumental wonders, like volcanos and orcas, and its quietly bewitching details, like snowflakes and butterfly metamorphosis.

Octopuses are Smart Suckers!? - The Cephalopod Page << Cephalopod Articles | By Dr. Jennifer Mather, Department of Psychology and Neuroscience, University of Lethbridge and Roland C. Anderson, The Seattle Aquarium The same question about octopus behavior intrigued both authors, though at different places and from different backgrounds. While watching an Octopus vulgaris in Bermuda, the first author observed it sitting in its sheltering den after a foraging expedition, where it caught several crabs, took them home and ate them.

Tardigrade Tardigrades (also known as waterbears or moss piglets)[2][3][4] are water-dwelling, segmented micro-animals, with eight legs.[2] They were first discovered by the German pastor Johann August Ephraim Goeze in 1773. The name Tardigrada (meaning "slow stepper") was given three years later by the Italian biologist Lazzaro Spallanzani.[5] Since 1778, over 1,150 tardigrade species have been identified. Tardigrades can survive in extreme environments. For example, they can withstand temperatures from just above absolute zero to well above the boiling point of water (100 °C), pressures about six times greater than those found in the deepest ocean trenches, ionizing radiation at doses hundreds of times higher than the lethal dose for a human, and the vacuum of outer space. They can go without food or water for more than 10 years, drying out to the point where they are 3% or less water, only to rehydrate, forage, and reproduce.[3][6][7][8] Description[edit]

Harbour porpoise The harbour porpoise (Phocoena phocoena) is one of six species of porpoise. It is one of the smallest marine mammals. As its name implies, it stays close to coastal areas or river estuaries, and as such, is the most familiar porpoise to whale watchers. This porpoise often ventures up rivers, and has been seen hundreds of miles from the sea. The harbour porpoise may be polytypic, with geographically distinct populations representing distinct races: P. p. phocoena in the North Atlantic and West Africa, P. p. relicta in the Black Sea and Sea of Azov, an unnamed population in the northwest Pacific and P. p. vomerina in the northeast Pacific.[10] Etymology

12 Outrageous Facts About Octopuses The octopus is a magnificent and mysterious creature. They’re well known for their eight tentacles, but did you know these other outstanding facts? Need a name for your friendly neighborhood group of octopi? Octopi might not be the word you actually want. Ladybug Classification: Types and Species of Ladybugs This pink-spotted ladybug is a different shape than most, but is still a ladybug. Ladybug Taxonomy How are Ladybugs Classified? Kingdom: Animalia (All animals) Phylum: Arthopoda (Invertebrates) Class: Insecta (Insects) Order: Coleoptera (Beetles.) Family: Coccinellidae (Lady beetles) Genus: Hippodamia ( Lady beetle type) Species: Convergens (specific ladybug) When you want to learn all there is to know about ladybugs, ladybug classification is just one thing you should know.

Nature's 'true' colours Credit: iStock In the mid-1900s, the first lens replacement surgery in the human eye was carried out. This launched a 50-year period of growth and experimentation that would establish the most commonly-used eye surgery procedure in the world today. But when the surgery was first developed, scientists didn’t realise the complexity of the human eye.

Dawn chorus (birds) In the UK the dawn chorus may begin as early as 3am in early summer. The most often heard species of birds are, in order of them beginning to sing:[citation needed] ^ Jump up to: a b Jamieson, Barrie Gillean Molyneux (editor) (2007) Reproductive Biology and Phylogeny of Birds: Sexual selection, behavior, conservation, embryology, genetics (Part B of Reproductive Biology and Phylogeny of Birds) Science Publishers, Enfield, New Hampshire, page 183, ISBN 978-1-57808-386-2Jump up ^ Moller, A.P., (1992). Interspecific response to playback of bird song. Ethology, 90: 315-320.

How the Coelacanth Works Sixty-five million years ago, when dinosaurs roamed the earth, carnivorous fish that could stretch up to 6.5 feet (2 meters) long and tipped the scales at about 200 pounds (91 kilograms) filled the seas. These mysterious creatures were called coelacanths (SEEL-uh-kanths), and there were 90 species of its kind. Their craniums contained a mere speck of brain matter — the brain occupied only 1.5 percent of the cranial space and the other 98.5 percent was fat [sources: National Geographic, Smithsonian]. Everyone assumed coelacanths went the way of the dinosaurs and faded into extinction. Do animals have a sense of humor? New evidence suggests that all mammals have a funny bone. Fuse/iStockphoto, chrisbrignell/iStockphoto. Photo illustration by Natalie Matthews-Ramo. Right now, in a high-security research lab at Northwestern University’s Falk Center for Molecular Therapeutics, scientists are tickling rats.

15 Animals With Crazy Sex Lives Birds do it, bees do it—and sometimes it gets kinky. 1. Hippopotamuses Randy male hippos pull out all the stops to compete for the few eligible females in the pod: Bulls spin their tails as they urinate and defecate, spraying the vicinity with waste. 2. Absurd Creature of the Week: Satanic Leaf-Tailed Gecko Wears the World’s Most Unbelievable Camo “What’s in a name?” Shakespeare once asked, apparently in Romeo and Juliet, which I just learned from Google because I did not pay attention in that class in college. “That which we call a rose by any other name would smell as sweet.”