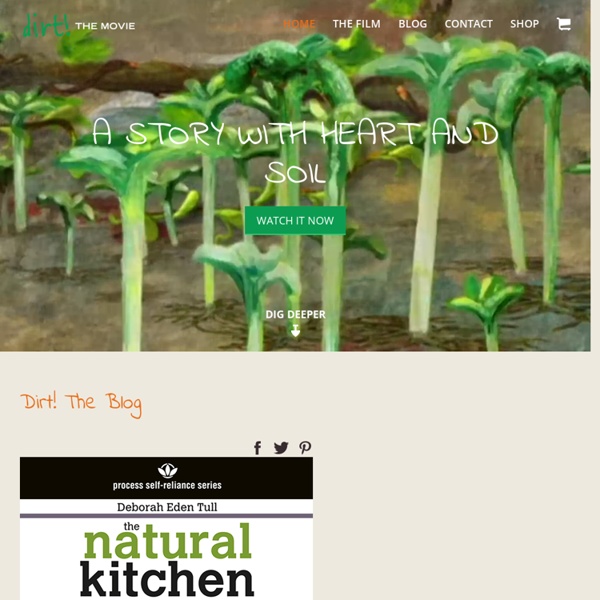 A Quiet Revolution: The Earth Charter and Human Potential | Resource Center A 30-minute film featuring three dramatic case studies of how individuals in India, Slovakia and Kenya have contributed to solving local environmental problems. Narrated by Academy Award-winning actress Meryl Streep, and featuring interviews with UN Secretary-General Kofi Annan and other experts, the film's primary message is that even one person's action can make a dramatic difference. "...feeling powerless to affect the crisis facing humanity, many do nothing. But a growing number of ordinary people are carrying out a quiet revolution." "Sometimes I tell myself, I may only be planting a tree here, but just imagine what's happening if there are billions of people out there doing something. Just imagine the power of what we can do..."--2004 Nobel Peace Prize Laureate Wangari Maathai The film is now available in 8 languages--English, Japanese, Chinese (traditional), Korean, Spanish, French, German and Arabic. Click here to view the full video ▲ Back to top

Waste = Food Man is the only creature that produces landfills. Natural resources are being depleted on a rapid scale while production and consumption are rising in na­tions like China and India. The waste production world wide is enormous and if we do not do anything we will soon have turned all our resources into one big messy landfill. But there is hope. The German chemist, Michael Braungart, and the American designer-architect William McDonough are fundamentally changing the way we produce and build. A design and production concept that they call Cradle to Cradle. Large companies like Ford and Nike are working with McDonough and Braun­gart to change their production facilities and their products. Watch the full documentary now -

The Green Cone is a backyard solar digester that reduces 90% of food waste This ingenious digester/composter, made in Ontario, is the simple, natural way to divert food waste from landfills. No matter how much I think about reducing food waste while shopping and cooking, there will always be food scraps left over. My town does not have green bins or organic waste collection of any kind, which means that each household is responsible for dealing with the piles of food waste generated on a daily basis – and I always have a lot, since I cook so much. There was a time when I tossed it in with the household garbage, but eventually I installed a regular black box-style composter. While I loved having a place to put most of the food scraps, there were still plenty of items that could not go in, ending up in the trash instead. Then I discovered the Green Cone. © Compostec The Green Cone has double walls that heat up in the sun, cycling oxygen to the chamber below that is humid and connected to the surrounding soil, and speeding up the breakdown process.

Green The Film Ollas: Unglazed Clay Pots for Garden Irrigation A Sri Lankan villager fills his olla Photo copyright © Craig Mackintosh I first encountered the concept of using unglazed clay vessels for sub-surface irrigation in Bill Mollison’s “The Global Gardener” film series. Mollison comments that the technique might be, to paraphrase, “the most efficient irrigation system in the world.” Ollas (pronounced “oy-yahs”) are unglazed clay/terra-cotta pots with a bottle or tapered shape that are buried in the ground with the top/neck exposed above the soil surface and filled with water for sub-surface irrigation of plants. Ollas may be the most efficient method of local plant irrigation in drylands known to humanity due to the microporous (unglazed) walls that do “not allow water to flow freely from the pot, but guides water seepage from it in the direction where suction develops. ub-surface irrigation as water oozes out of it due to the suction force which attracts water molecules to the plant roots. This video shows a potter’s wheel technique:

Films For Action Presents: The Top 100 Documentaries Inspiring the Shift to a Sustainable Paradigm By Films For Action / filmsforaction.org Film offers us a powerful tool to shift awareness and inspire action. By hosting community film screenings and sharing them online, they offer a method to break our dependence on the mainstream media and become the media ourselves. We don't need to wait for anyone or anything. Just imagine what could become possible if an entire city had seen just one of the documentaries below. Just imagine what would be possible if everyone in the country was aware of how unhealthy the mainstream media was for our future and started turning to independent sources in droves. Creating a better world really does start with an informed citizenry, and there's lots of subject matter to cover. Our society needs a new story to belong to. But most of all, we need to see the promise of the alternatives - we need to be able to imagine new exciting ways that people could live, better than anything that the old paradigm could ever dream of providing. Community Suggestions

10 Easy DIY Free Greenhouse Plans Gardening is a relaxing and rewarding hobby. If you are a person who seeks to be independent, a garden can help you achieve that. In that regard, growing your own plants or vegetables will be more than rewarding. And you don’t even have to stop when the cold weather strikes. Yes, plants and especially vegetables are sensitive to harsh atmospheric conditions, but that’s no impediment for you to commit to growing your own food and taking care of your own garden. 1. free plan 2. free plan 3. free plan 4. free plan 5. free plan

Wall of Films! | Over 500 Social Change Documentaries on 1 Page Just imagine what could become possible if an entire city had seen just one of the documentaries above. Just imagine what would be possible if everyone in the country was aware of how unhealthy the mainstream media was for our future and started turning to independent sources in droves. Creating a better world really does start with an informed citizenry, and there's lots of subject matter to cover. From all the documentaries above, it's evident that our society needs a new story to belong to. The old story of empire and dominion over the earth has to be looked at in the full light of day - all of our ambient cultural stories and values that we take for granted and which remain invisible must become visible. But most of all, we need to see the promise of the alternatives - we need to be able to imagine new exciting ways that people could live, better than anything that the old paradigm could ever dream of providing. So take this library of films and use it.

Tree Encyclopedia Trees have three principle features that distinguish them from all other plants. First, they have a woody stem, roots and branches which do not die back in winter, but continue to grow year after year. From the moment of its germination, a tree remains visible; from the tallest Sequoia to the smallest garden fruit tree, this principle of growth remains constant. Trees live longer than any other organism on earth. Pando (Latin for “I spread”), aka “the trembling giant,” is a clone colony of male quaking aspen, (Populus tremuloides) a single living organism identified by identical genetic markers. Trees have been living on Earth for more than 370 million years, and today can be found almost everywhere from the Arctic Circle to the Sahara Desert. Family Aceraceae: Maples are some of our most familiar and beloved trees. NASA thoughtfully provides instructions on constructing a helicopter out of paper: “Maple seeds are superb autorotating helicopters. Family Magnoliaceae – Magnolia.

Tree Disease identification, symptoms, treatment options for tree diseases There are many different diseases that affect landscape trees and shrubs. Control of tree and shrub diseases cannot be properly accomplished until the disease pest is identified. Identification of tree and shrub diseases is crucial because, although most diseases can be controlled, there are some diseases that cannot be controlled. Disease control on landscape trees and shrubs can sometimes be accomplished by more than one method, depending on the particular disease that if infecting your landscape plants. Fungicides are often used to control diseases on landscape trees and shrubs and fungicides may be sprayed, injected into the tree trunk, or even injected into the soil surrounding the roots of the tree or shrub. Even if you are going to attempt to control a disease that is infecting your landscape trees or shrubs you should consider consulting a local arborist.

Biochar Biochar created through the pyrolysis process. History[edit] Left - a nutrient-poor oxisol; right - an oxisol transformed into fertile terra preta using biochar Pre-Columbian Amazonians are believed to have used biochar to enhance soil productivity. They produced it by smoldering agricultural waste (i.e., covering burning biomass with soil)[5] in pits or trenches.[6] European settlers called it terra preta de Indio.[7] Following observations and experiments, a research team working in French Guiana hypothesized that the Amazonian earthworm Pontoscolex corethrurus was the main agent of fine powdering and incorporation of charcoal debris to the mineral soil.[8] The term “biochar” was coined by Peter Read to describe charcoal used as a soil improvement.[9] Production[edit] Pyrolysis produces biochar, liquids, and gases from biomass by heating the biomass in a low/no oxygen environment. Centralized, decentralized, and mobile systems[edit] Thermo-catalytic depolymerization[edit] Uses[edit]