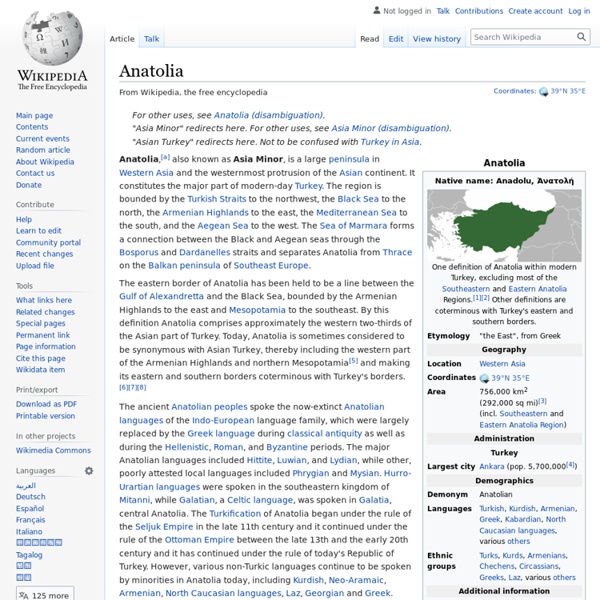 Anatolia (from Greek: Ἀνατολή, Anatolḗ, "east" or "[sun]rise"; Turkish: Anadolu), also known as Asia Minor (Medieval and Modern Greek: Μικρά Ἀσία, Mikrá Asía, "small Asia"; Turkish: Küçük Asya), Asian Turkey, the Anatolian peninsula or the Anatolian plateau, is a large peninsula in West Asia and the westernmost protrusion of the Asian continent. It makes up the majority of modern-day Turkey. The region is bounded by the Black Sea to the north, the Mediterranean Sea to the south, the Armenian Highlands to the east and the Aegean Sea to the west. The Sea of Marmara forms a connection between the Black and Aegean seas through the Bosphorus and Dardanelles straits and separates Anatolia from Thrace on the Balkan peninsula of Europe. The eastern border of Anatolia is traditionally held to be a line between the Gulf of Alexandretta and the Black Sea, bounded by the Armenian Highland to the east and Mesopotamia to the southeast. Geography[edit] Etymology[edit] Names[edit] History[edit] Arameans

Iran Country in the Middle East Coordinates: 32°N 53°E / 32°N 53°E / 32; 53 Iran (Persian: ایران‎ Irān [ʔiːˈɾɒːn] ( Turkey Country straddling Southeastern Europe and Western Asia Turkey (Turkish: Türkiye [ˈtyɾcije]), officially the Republic of Turkey (Turkish: Türkiye Cumhuriyeti [ˈtyɾcije dʒumˈhuːɾijeti] ( One of the world's earliest permanently settled regions, present-day Turkey was home to important Neolithic sites, and was inhabited by various civilisations, such as the ancient Anatolian peoples.[12][13][14] Hellenization started in the area during the era of Alexander the Great and continued into the Byzantine era.[13][15] The Seljuk Turks began migrating in the 11th century, and the Sultanate of Rum ruled Anatolia until the Mongol invasion in 1243, when it disintegrated into small Turkish principalities.[16] Beginning in the late 13th century, the Ottomans started uniting the principalities and conquering the Balkans, and the Turkification of Anatolia increased during the Ottoman period.

Mesopotamia Map showing the extent of Mesopotamia Mesopotamia (from the Ancient Greek: Μεσοποταμία: "[land] between rivers"; Arabic: بلاد الرافدين‎ (bilād al-rāfidayn); Syriac: ܒܝܬ ܢܗܪܝܢ (Beth Nahrain): "land of rivers") is a name for the area of the Tigris–Euphrates river system, corresponding to modern-day Iraq, Kuwait, the northeastern section of Syria and to a much lesser extent southeastern Turkey and smaller parts of southwestern Iran. Widely considered to be the cradle of civilization in the West, Bronze Age Mesopotamia included Sumer and the Akkadian, Babylonian, and Assyrian empires, all native to the territory of modern-day Iraq. In the Iron Age, it was controlled by the Neo-Assyrian and Neo-Babylonian empires. The indigenous Sumerians and Akkadians (including Assyrians and Babylonians) dominated Mesopotamia from the beginning of written history (c. 3100 BC) to the fall of Babylon in 539 BC, when it was conquered by the Achaemenid Empire. Etymology

Lydia Old Age kingdom of western Asia Minor Lydian Empire circa 600 BC. Lydia (Assyrian: Luddu; Greek: Λυδία, Lȳdíā; Turkish: Lidya) was an Iron Age kingdom of western Asia Minor located generally east of ancient Ionia in the modern western Turkish provinces of Uşak, Manisa and inland İzmir. Its population spoke an Anatolian language known as Lydian. Its capital was Sardis.[1] Coins are said to have been invented in Lydia around the 7th century BC.[2] Levant The term entered English in the late 15th century from French.[3] It derives from the Italian Levante, meaning "rising", implying the rising of the sun in the east.[2][4] As such, it is broadly equivalent to the term Al-Mashriq (Arabic: اَلْـمَـشْـرِق‎, [ʔalmaʃriq])[5], meaning "the land where the sun rises". The Levant has been described as the "crossroads of western Asia, the eastern Mediterranean, and northeast Africa",[19] and the "northwest of the Arabian plate".[20] The populations of the Levant[21][22] share not only the geographic position, but cuisine, some customs, and a very long history. They are often referred to as Levantines.[23]

Candaules Bibliographical record of Candaules, last Heraclid king of Libya Candaules (died c.687 BC; Greek: Κανδαύλης, Kandaulēs), also known as Myrsilos (Μυρσίλος),[1] was a king of the ancient Kingdom of Lydia in the early years of the 7th century BC. According to Herodotus, he succeeded his father Meles as the 22nd and last king of Lydia's Heraclid dynasty. He was assassinated and succeeded by Gyges.[1][2] Based on an ambiguous line in the work of the Greek poet Hipponax, it was traditionally assumed that the name of Candaules meant "hound-choker" among the Lydians.[3] J. Gyges of Lydia Biographical record of Gyges, king of Lydia, 7th century BC A rare depiction of the legend of Gyges finding the magic ring, Ferrara, 16th century Gyges (, ; Greek: Γύγης; Lydian: 𐤨𐤰𐤨𐤠𐤮 Kukaś; fl. 7th century BC) was the founder of the Mermnad dynasty of Lydian kings. The dates of his reign are uncertain but have been tentatively estimated as c. 687 – c. 652 BC.[1] He was a bodyguard of his predecessor Candaules whom he assassinated in order to seize the throne.

Sadyattes Sadyattes (reigned c.603–c.591 BC) was the third king of the Mermnad dynasty in Lydia, the son of Ardys. According to Herodotus, he reigned for twelve years. He was succeeded by his son Alyattes. Sadyattes began a war with the Ionian Greek maritime city of Miletus that was continued by Alyattes.[1] Dates for the Mermnad kings are uncertain and are based on a computation by J. B. Middle East The Middle East[note 1] (also called the Mid East) is a eurocentric description of a transcontinental region centered on Western Asia and Egypt. The corresponding adjective is Middle-Eastern and the derived noun is Middle-Easterner. Formerly, the eurocentric synonym Near East (as opposed to Far East) was commonly used. Arabs, Azeris, Kurds, Persians, and Turks constitute the largest ethnic groups in the region by population,[1] while Armenians, Assyrians, Circassians, Copts, Druze, Jews, Maronites, Somalis, and other denominations form significant minorities. The history of the Middle East dates back to ancient times, and the region has generally been a major center of world affairs.

Colchis Historical region of Antiquity Internationally, Colchis is perhaps best known for its role in Greek mythology, most notably as the destination of the Argonauts, as well as the home to Medea and the Golden fleece.[3] It was also described as a land rich with gold, iron, timber and honey that would export its resources mostly to ancient Hellenic City states.[4] Geography and toponyms[edit] Colchian scent bottle fourth century BC Colchís, Kolkhís[7][8][9][10] or Qulḫa[11][12][13] which existed from the c. 13th to the 1st centuries BC is regarded as an early ethnically Georgian polity;[by whom? – Discuss] the name of the Colchians was used as the collective term for early Kartvelian tribes which populated the eastern coast of the Black Sea in Greco-Roman ethnography.[14]

Alyattes of Lydia Biography of Alyattes, king of Lydia to 560 BC Lydian King Alyattes was the first monarch who issued coins, made from electrum (and his successor Croesus was the first to issue gold coins). Alyattes is therefore sometimes mentioned as the originator of coinage, or of currency.[5] Trojan War Mythological war Whether there is any historical reality behind the Trojan War remains an open question. Many scholars believe that there is a historical core to the tale, though this may simply mean that the Homeric stories are a fusion of various tales of sieges and expeditions by Mycenaean Greeks during the Bronze Age.

Helen of Troy Daughter of Zeus in Greek Mythology Elements of her putative biography come from classical authors such as Aristophanes, Cicero, Euripides, and Homer (in both the Iliad and the Odyssey). Her story reappears in Book II of Virgil's Aeneid. In her youth, she was abducted by Theseus. A competition between her suitors for her hand in marriage saw Menelaus emerge victorious. All of her suitors were required to swear an oath (known as the Oath of Tyndareus) promising to provide military assistance to the winning suitor, if Helen were ever stolen from him.

Croesus Lydian King Croesus[1] ( KREE-səs; Ancient Greek: Κροῖσος, Kroisos; 595 BC – date of death unknown) was the king of Lydia who, according to Herodotus, reigned for 14 years: from 560 BC until his defeat by the Persian king Cyrus the Great in 546 BC[2] (sometimes given as 547 BC). Legendary biography[edit] Early rule and wealth[edit] Gold coin of Croesus, Lydian, around 550 BC, found in what is now modern Turkey Reportedly, Croesus on the death of his father Alyattes faced a rival claimant to the throne in Pantaleon, son of Alyattes by a different mother.