The Myth of the Ethical Shopper - The Huffington Post 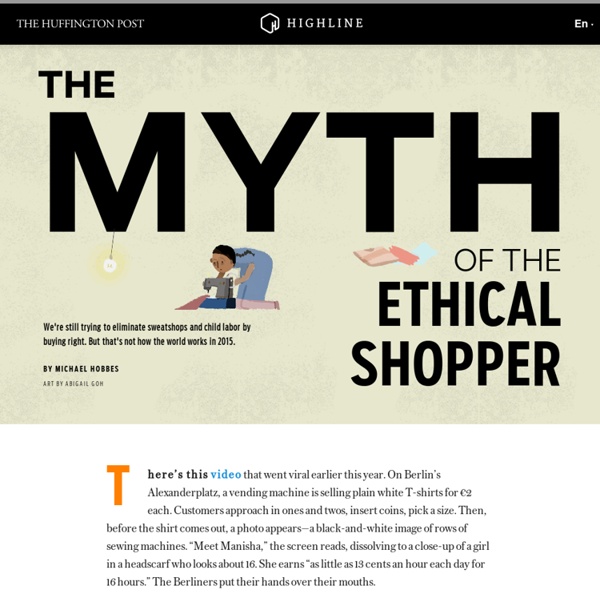 Michael Hobbes There’s this video that went viral earlier this year. On Berlin’s Alexanderplatz, a vending machine is selling plain white T-shirts for €2 each. “Do you still want to buy this shirt?” For a generation now, buying better has been one of our most potent forms of protest. It all started in the mid-’90s, when anti-sweatshop mania burst into the mainstream of American culture. And for a while there, it worked. But in the past 25 years, the apparel industry, the entire global economy, has undergone a complete transformation. This year, I spoke with more than 30 company reps, factory auditors and researchers and read dozens of studies describing what has happened in those sweatshops since they became a cultural fixation three decades ago. translation missing: en.parallax1_caption If you’ve ever been to a corporate social responsibility conference, you’ve undoubtedly heard the story of the three fire extinguishers. This is the world that No Logo built. It’s the same in Burma. Related:  Fashion Inc. • More Economic Theory and Bits

The Peril of Skinny Jeans, Corsets, and Restrictive Clothing Skinny jeans can definitely be too skinny, as an Australian woman found out the hard way. After donning her jeans for a day of helping a friend pack, a job that involved a lot of squatting, she collapsed on a path, legs too swollen to walk. After 4 days in hospital, during which her jeans had to be cut off, the woman thankfully recovered. She had Compartment Syndrome, a dangerous compression injury that was first identified in WWII bombing victims who spent hours pinned under rubble before rescue. When your jeans simulate the Blitz, there’s a problem, but it’s not the first time fashion has caused lasting harm. Compared to Victorian women, hipsters have it easy. Despite pretty straightforward evidence, the mysterious ailment that affected young women was misdiagnosed as anemia, instead of, in technically terminology, Squashed Organs. Corsets did not go quietly, but eventually they faded away, benefitting both women and whales. Muscle Compartment Syndrome Published by: BMJ By: F.

The Logic of Surveillance Capitalism This post was originally published on Philosophical Disquisitions. You have probably noticed it already. There is a strange logic at the heart of the modern tech industry. The famous Harvard business theorist Shoshana Zuboff refers to this phenomenon assurveillance capitalism and she believes that it has its own internal ‘logic’ that we need to carefully and critically assess. And that’s what I want to do in this post. Zuboff identifies four key features in the logic of surveillance capitalism. Each of these four features has important social repercussions. 1. First, you need to understand the sources of the data, i.e. what it is that makes it fair to refer to this as the era of ‘big data’. Second, you need to understand the relationship between the data-extracting companies, like Google, and the users of their services. It is worth dwelling on this functional independence for a moment. One final point about data extraction and analysis. 2. (Zuboff 2015, 81) 3. 4. (Zuboff 2015, 85) 5.

How a Makeup Mogul Liberated Women by Putting Them in a Pretty New Cage When Caitlyn Jenner made her debut on the July 2015 cover of “Vanity Fair” in full old-Hollywood glamour mode, her highly styled appearance triggered discussion and debate: After all, not every woman has the money to, or even wants to, embody that particular ideal of feminine beauty, which involves elaborate foundation makeup to create shimmery highlights and contoured cheeks. Fifty years after the women’s lib movement railed against makeup, we’re still deeply conflicted about the stuff. Is it a tool for oppression—a way to force women to conform to certain standards meant to please or seduce men? “She encouraged women to be exceptional at a time when the world disparaged nonconformity and hated it for women.” In the Victorian and Edwardian periods, respectable Western middle-class society condemned regular use of makeup, which was thought of as something only stage actors and prostitutes used. Top: Cosmetics magnate Helena Rubinstein always projected a scientific image.

Capital - The end of middle management? As the US election season gets underway, American politicians are rolling out their usual lines about creating jobs for the middle class. It’s a terrific sentiment, but if they’re talking about the middle class that used to populate middle-management jobs in offices around the country, I’m sorry to report that that train has left the station. The sad truth is that middle management is on its way to becoming virtually extinct. We should no longer expect traditional job ladders for managers to move up the ranks, or even retaining the notion that middle managers are the glue that connects workers and ensures goal alignment up and down the hierarchy. This is different. Replaced by computers While lauded, technological advances have already taken their toll on lower-level jobs. Further up the chain, the problem gets much worse, particularly for some professions. A cultural shift The demise of middle management isn’t due to technological advances alone. Millennials at work Moving forward

The Dangers of Tight Jeans, According to Research - Pacific Standard The day after she'd been helping a relative move, a 35-year-old woman tripped and fell. As a result of the accident, the woman spent a subsequent four days in the hospital. The culprit here was not clumsiness; blame the woman's skinny jeans. This is the first time anybody has reported in the scientific literature on the possibility of injuring nerves from skinny jeans, write the authors—neurologists from the Royal Adelaide Hospital in Australia. Most tight-jeans case studies have happy endings. It seems the dangers of jeans can be mild, unproven, or relatively rare. Advertisement — Continue reading below

A World Without Work 1. Youngstown, U.S.A. The end of work is still just a futuristic concept for most of the United States, but it is something like a moment in history for Youngstown, Ohio, one its residents can cite with precision: September 19, 1977. For much of the 20th century, Youngstown’s steel mills delivered such great prosperity that the city was a model of the American dream, boasting a median income and a homeownership rate that were among the nation’s highest. But as manufacturing shifted abroad after World War II, Youngstown steel suffered, and on that gray September afternoon in 1977, Youngstown Sheet and Tube announced the shuttering of its Campbell Works mill. Youngstown was transformed not only by an economic disruption but also by a psychological and cultural breakdown. This winter, I traveled to Ohio to consider what would happen if technology permanently replaced a great deal of human work. The U.S. labor force has been shaped by millennia of technological progress. 2. 3. 4. 5. 6. 7.

How textiles revolutionised technology – Virginia Postrel In February 1939, Vogue ran a major feature on the fashions of the future. Inspired by the soon-to-open New York World’s Fair, the magazine asked nine industrial designers to imagine what the people of ‘a far Tomorrow’ might wear and why. (The editors deemed fashion designers too of-the-moment for such speculations.) A mock‑up of each outfit was manufactured and photographed for a lavish nine-page colour spread. You might have seen some of the results online: an evening dress with a see-through net top and strategically placed swirls of gold braid, for instance, or a baggy men’s jumpsuit with a utility belt and halo antenna. Popular now How to build a metaphor to change people’s minds Why is the hotel room a place of such lingering despair? The Nazi judge who sought justice in the system The ridicule is unfair. ‘The important improvements and innovations in clothes for the World of Tomorrow will be in the fabrics themselves,’ declared Raymond Loewy, one of the Vogue contributors. Making

A true crime tale of comic books, corruption, and a $9 million vanishing act By Russell Brandom & Colin Lecher | Illustrations by Jun Cen ou don’t see an All Star Comics #3 every day. Published in 1940, it’s a milestone in what’s known as the Golden Age of comic books: the debut of the first bonafide superhero team, the Justice Society of America. There’s hardly a plot, only a meeting of some of DC’s biggest stars — Flash, Green Lantern, Hawkman — taking turns sharing tales as if they were telling ghost stories at a campfire. Spectre recounts a battle with a monster from the moon; Hawkman remembers a crisis on the island of Krakatoa. The masked vigilantes on the cover are a friendly lot, decades removed from the gritty realism that would come to dominate the industry later. So when an All Star Comics #3 surfaced at Heritage Auctions’ first big sale of 2012, collectors took notice. But someone bidding at the Heritage auction was willing to pay significantly more. All Star #3 wasn’t the only mid-tier comic suddenly going for outrageous prices at the 2012 sale.

How Ford Models Got Its Start The little-known story behind a pair of young newlyweds in post–World War II Manhattan who launched the era of the supermodel. When Eileen Otte and Jerry Ford eloped to San Francisco in November 1944, in the midst of World War II, it was hardly surprising that Jerry should declare his profession as “Naval Officer” on his marriage certificate. His new spouse, however, set down an occupation that was more unusual in a time of war, “Stylist,” and she listed her employer as a “commercial photographer.” Earlier that spring, around the same time the young couple first met, Eileen had embarked on the career path that would lead to her creation with Jerry of what would become the Ford modeling agency. It had started not far from her Great Neck, Long Island, home. Eileen jumped up and put one hand to her ear and the other to her hip to present herself as the perfect 1910 Bloomer Girl. Cover Girl The young stylist’s next bright idea was not so well appreciated by her employer, however. Top Model