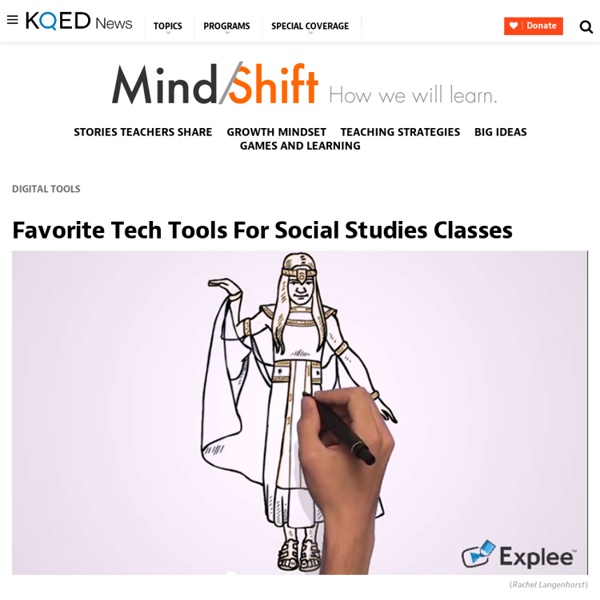 Educators are looking for ways to help students participate in a digital world, but the choices for digital engagement in the classroom can be overwhelming. Many teachers have little to no money to pay for premium versions of apps and are looking for quick and easy ways to determine how an app works. They must also consider why it might be useful for their teaching practice. Rachel Langenhorst helps teachers in her district find solutions for those issues. She used to teach social studies, but is now the K-12 Technology Integrationist and Instructional Coach at Rock Valley Community Schools in Iowa. She put together a list of favorite digital tools for the social studies classroom and shared them during an edWeb webinar. “Really be cognizant of the digital tools you’re picking and why you are picking them,” Langenhorst said. Every educator in the digital world needs a bookmarking tool to help keep track of resources, ideas and sources for students. Thinglink makes pictures interactive.

Geo-Literacy Projects Build Students' Understanding of Our Complex World If interdisciplinary project-based learning is a goal for you and your students this school year, you might want to start with questions that put a premium on place. For example: Where are bicycle accidents most likely to happen in your community? Where's the best spot to watch for migrating Monarch butterflies? Native American Quotes, Native American Wisdom Sayings Inspirational sayings, quotes, and words of wisdom from a Native American perspective, reflecting Native American beliefs, philosophy and spirituality. Cherokee Prayer Blessing May the Warm Winds of HeavenBlow softly upon your house.May the Great SpiritBless all who enter there.May your MocassinsMake happy tracksin many snows,and may the RainbowAlways touch your shoulder. Treat the earth well.It was not given to you by your parents,it was loaned to you by your children.We do not inherit the Earth from our Ancestors,we borrow it from our Children. Ancient Indian Proverb

DNA Analysis Shows Native American Genealogy The suppression of the Native Americans and the decimation of their culture is a black page in the history of the United States. The discrimination and injustices towards this ancient race, which had lived on the American continent long before the European conquerors came to this land, are still present to this day despite the efforts of different groups and organizations trying to restore the justice. The destruction of their culture is one of the most shameful aspects of our history, the extent of the damage that was done is still being down-played and denied entry into textbooks and history-lessons to this day. The origin and history of the Indigenous Peoples of the Americas have been studied for years by researchers from different countries, and a recent DNA study showed that the genealogy of the western aboriginals is one of the most unique in the world. This explanation was persuasive enough; however, there was no strong evidence to support it.

By Learning From History, Teachers Help Nurture “Upstanders” In the onslaught of news about the 2016 presidential election, it’s easy to feel powerless amid so much disagreement over the complex problems facing a country of 318 million people. Multiply that feeling by about a million if you’re a young person witnessing the first election you’re old enough to understand. But Mary Hendra, associate program director for Facing History and Ourselves in Los Angeles, says that for educators, the election is an opportunity to remind young people that change doesn’t happen only in a voting booth. It can happen in one’s neighborhood or school, or when young people become what Hendra calls “upstanders”—those who speak on behalf of others and stand up to injustices small or large. “The candidates are putting forward their vision for the country,” Hendra said. “But it’s a really nice time for students to think: ‘What’s my vision for my own community?

9 Examples of Indigenous Sense in a Nonsensical Time By Rucha Chitnis / buzzfeed.com Sometimes it seems like we live in nonsensical times. Do you ever wonder what happened to good old common sense? Triptiks Can Rev Up Student-Driven Learning By Mike Fisher My overriding message is still focused on high levels of student engagement. We also want to be sure we include discovery level learning opportunities that are authentic and timely. Native American populations descend from three key migrations, scientists say Scientists have found that Native American populations -- from Canada to the southern tip of Chile -- arose from at least three migrations, with the majority descended entirely from a single group of First American migrants that crossed over through Beringia, a land bridge between Asia and America that existed during the ice ages, more than 15,000 years ago. By studying variations in Native American DNA sequences, the international team found that while most of the Native American populations arose from the first migration, two subsequent migrations also made important genetic contributions. The paper is published in the journal Nature July 11. "For years it has been contentious whether the settlement of the Americas occurred by means of a single or multiple migrations from Siberia," said Professor Andres Ruiz-Linares (UCL Genetics, Evolution and Environment), who coordinated the study. "But our research settles this debate: Native Americans do not stem from a single migration.

Reasons to Love Teaching Middle School History MiddleWeb Blog Middle school kids and middle school teaching are much maligned. So I want to go on record: Middle school rocks!” Francis by Richard Hickey Written by novelist & screenwriter Dave Eggars, for the ever-popular radio show This American Life, animated film Francis is the tense tale of the unexplained happenings on a lake in the middle of an Ontario nature preserve. Brought to life by Not to Scale director Richard Hickey and a team of 40 animators, this captivating short perfectly blends the worlds of outstanding production values with engaging storytelling. Her mouth went dry.

How one social studies teacher makes history come alive With school resuming all over Colorado this month, it’s time for teachers, students and families to get back into the regular rhythms of learning. Here, in a feature we are calling How I Teach, we spotlight how great teachers approach their jobs. If you’re looking for a history lesson, look no further than Stephanie Rossi’s classroom. The Wheat Ridge High School social studies teacher has been teaching students about the founding fathers, Great Depression and Civil Rights movement for 37 years. Rossi was a part of local history herself when she became a de facto spokeswoman for an advanced U.S. history course that caught the attention of a Jefferson County school board member, who was worried the course wasn’t patriotic.