Nepal earthquake: Before and after - BBC News 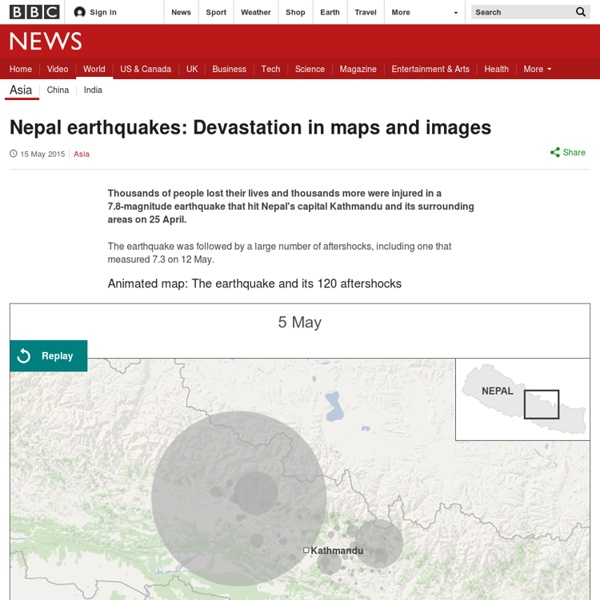 Thousands of people lost their lives and thousands more were injured in a 7.8-magnitude earthquake that hit Nepal's capital Kathmandu and its surrounding areas on 25 April. The earthquake was followed by a large number of aftershocks, including one that measured 7.3 on 12 May. Animated map: The earthquake and its 120 aftershocks 27 April Kathmandu Map Data Map data ©2016 Google ©2016 Google - Map DataMap data ©2016 Google Among the worst-hit districts was Sindhupalchok - where more than 2,000 died. Worst-affected areas Since then, people are living in makeshift camps around Kathmandu, having been made homeless by the quake or because they are too afraid to stay inside. Many of the country's historic sites have been severely damaged, including temples and monuments. Kathmandu Analysis of satellite imagery captured before and after the devastating quake reveals that more than 180 buildings in the densely populated city centre were destroyed. Building damage in Kathmandu: 27 April 2015 Bhaktapur Related:  Hazards • Information: UN, government contacts and statistics

Nepal was made vulnerable by more than its violent geology | Shaheen Chughtai Kathmandu was ever a disaster-in-waiting. The densely populated capital of one of the world’s poorest countries clings to the slopes of the seismically unstable Himalayas. The city was nearly levelled and 8,500 killed in its last great earthquake 81 years before. It had history. I first arrived in Kathmandu in 2007 to begin a new job with Oxfam. With the Kashmir tragedy fresh in my mind, I remember looking at the thousands of flimsy shacks and hovels lining Kathmandu’s dusty slums and the sturdier, but still precarious, multi-tiered family homes, the cheaply built apartment blocks and ornate temples that collectively give the city its colourful, distinctive appearance. But it’s not just its violent geology that made Kathmandu fundamentally flawed. Such an effort in the near-term will be extremely challenging. Communications are vital for workers to coordinate relief and aid, so the ability of medical and engineering staff to work easily is likely to be severely hampered.

USGS says predicting earthquakes impossible, scientists have no way of knowing when the next one will strike-WNews New Delhi: The devastating 7.9 magnitude earthquake and a series of aftershocks that have rocked Nepal along with parts of North and East India have led to panic among the general public. To add to their woes several rumours are doing the rounds claiming massive quakes will hit India soon. But scientists who study earthquakes say there is no method at present which can predict the time and intensity of this natural calamity. While the probability of an earthquake can be estimated, those claiming to predict the exact date and time are just fooling the public. Seismologists and geologists universally agree that predicting an earthquake is not possible. According to United States Geological Survey (USGS), one of the most reliable and technically advanced organisation involved in studying earthquakes, scientists are unlikely to be ever be able to predict them. "No, and it is unlikely they will ever be able to predict them.

Are Earthquakes and Volcano Activity on the Rise? The Costa Rica News (TCRN) – If it seems like earthquakes and erupting volcanoes are happening more frequently, that’s because they are. Looking at global magnitude six (M6) or greater from 1980 to 1989 there was an average of 108.5 earthquakes per year, from 2000 to 2009 the planet averaged 160.9 earthquakes per year: that is a 38.9% increase of M6+ earthquakes in recent years. The conspiracy theorists have been sounding alarms for some time about this with fingers pointing to HAARP technology, geo-engineering, electromagnetic waves in the ionosphere, etc. The image below shows statistics from the United States Geological Survey’s (USGS) Earthquake Hazards Program showing a significant increase M6 and greater events: The graph below shows the cumulative number of earthquakes M3 or greater in the mid-continental United States. The image above and associated data set from the USGS, has prompted the USGS to launch a scientific study to determine if the increase is natural, or man-made.

DigitalGlobe opens access to satellite data to support disaster response efforts in Nepal | Seeing a better world™ In response to the devastating 7.8-magnitude earthquake that struck central Nepal on April 25, DigitalGlobe has made high resolution satellite imagery of the affected areas freely available online to all groups involved in the response and recovery effort. This imagery can be accessed via Username: nepal Password: forcrisis​ Specifically, DigitalGlobe activated FirstLook, the subscription service that provides emergency management and humanitarian workers with fast, web-based access to pre- and post-event images of the impacted area. DigitalGlobe captured imagery of the area yesterday through heavy cloud cover with its WorldView-1, and WorldView-3, and GeoEye-1 satellites. In addition, DigitalGlobe has activated Tomnod, the crowdsourcing platform that allows web-connected volunteers around the globe to help disaster response teams by mapping damage from this earthquake.

Here's How Long It Would Take To Fall Through The Center Of Earth Just how long would it take to fall through the center of the Earth, traveling from one side of our planet to the other? Physicists have long calculated the answer to that question as being 42 minutes, but now, new calculations show that the theoretical trip would actually take around 38 minutes -- and we can blame gravity for the discrepancy. The traditional calculation to measure a fall through Earth assumes that our planet has a constant density throughout its many layers. But as Alexander Klotz, a graduate student at McGill University in Canada, came up with the new calculations, he took into consideration how Earth's density changes layer by layer. Klotz measured the different densities found in Earth's interior using seismic data. A paper describing the new thought experiment results was published in the March 2015 issue of the American Journal of Physics. "This is the kind of paper we love," Dr. Want to learn more about our planet's internal layers?

logistics_cluster_nepal_services_overview_150515.pdf If the Yellowstone Supervolcano ever blew its top, this new study shows us what to expect Scott Sutherland Meteorologist/Science Writer Thursday, September 11, 2014, 2:04 PM - Some recent scares with the supervolcano that lies under Wyoming's Yellowstone National Park - an unusually strong earthquake and some running bison - caused worry to spread about a possible impending eruption. None of these scares actually represented any real threat, but if this slumbering giant were to erupt, a new study is giving a much clearer, and frightening view of the effects that would be felt right across the U.S. and Canada. Yellowstone National Park is famous for its hot springs and its geysers, like Old Faithful, but in geologic circles it's famous for something else too - the Yellowstone caldera. Since the last eruption at Yellowstone was roughly 70,000 years ago and the other known major eruptions ranged back hundreds of thousands to millions of years ago, much of the evidence for the extent of the ashfalls from these eruptions have been erased by time. Credit: US Geological Survey

Earthquake Resistant Earthbag Building Guidelines PDF Earthquake resistant earthbag building guidelines are now available for free in a new PDF. Earthen buildings are strong in compression, but need help against tension or bending stresses. The barbed wire and vertical rebar in earthbag add important tensile strength. More than 50 earthbag buildings in Nepal have recently survived 0.5- >0.7g of earthquake motion. But existing earthbag is not magic. Owen Geiger and Kelly Hart have been instrumental in developing these guidelines. Type A is the standard earthbag method used in low risk zones. Read the complete report Earthbag Options for Nepal online at And see BSI’s simple visual building guides like Building EB Walls Better- we will be updating them soon, but can be found at – follow the link on upper left. Special thanks to Patti Stouter at Build Simple.org for her remarkable efort making this report available.