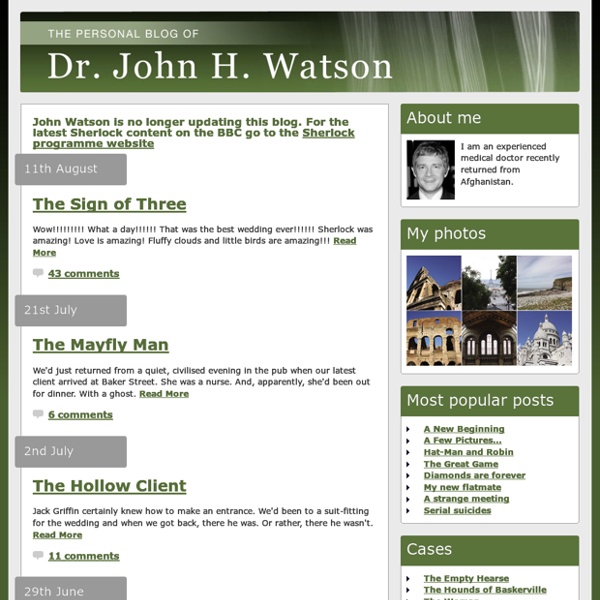 Martin Freeman Early life Martin Freeman was born in Aldershot, Hampshire, the youngest of five children. His parents, Philomena (née Norris) and Geoffrey Freeman, a naval officer, separated when Freeman was a child, and when Freeman was ten, Geoffrey died of a heart attack.[4][5] Freeman attended the Salesian School, Chertsey before attending Brooklands College for media studies.[6] His elder brother Tim became a musician with the group Frazier Chorus. Freeman was raised as a Roman Catholic. Although his family was not strict in their religious practices, his religion had a profound influence on him. As a child, he was asthmatic, and had to undergo a hip operation for what he has described as a "dodgy leg".[7][8]

BBC Sherlock - Fan Forum / Sherlock Holmes Canon Quiz - 29th June 2012 - Boardhost Free Forums OK, sorry for being a bit late on posting the answers, I was in London yesterday (again). So here are the correct answers I was looking for:1. How many steps are there up to 221B?17 Fanvids I absolutely agree in every way.And also I get upset because it’s not as if male friendships don’t get any representation. It’s not like, “OH GOD, I can’t even turn on my television without two men ending up in a romantic/sexual relationship just because they had a deep friendship. Why can’t I just enjoy the friendship without it being sexualized??” But no, you ask for anything queer, anything queer at all, and people act as though you’ve asked for the entirety of the television and film industries to ban platonic m/m relationships and hetero romantic relationships forever.And honestly, on a related note, I’m actually beginning to get pretty sick of, “I just don’t see it.” And I’m not saying that because I have a problem with other people getting a different read on the same material, because I absolutely don’t.

A Mycroftian Manifesto How I Learned to Stop Worrying and Love Mycroft As a writer and general all-purpose fangirl, I often find myself falling in love with characters while the source material looks on disapprovingly. Criminals and cads, serial killers and sociopaths---they’re hardly the kind of men I can see bringing home to my mother. When I’m not romancing complete scoundrels, I have a terrible weakness for minor characters. Sherlock (TV series) I'm Sherlock Holmes, the world's only consulting detective. I'm not going to go into detail about how I do what I do because chances are you wouldn't understand. If you've got a problem that you want me to solve, then contact me. Interesting cases only please. I'm a consulting detective.

A List of Untold Tales of Sherlock Holmes compiled by Randall Stock Untold Tales of Sherlock Holmes: A List of Major Case References By Randall Stock How many unreported cases are mentioned in the Holmes stories? As with so many things it depends on your definitions. Sherlock (TV series) Sherlock is a British television crime drama that presents a contemporary adaptation of Sir Arthur Conan Doyle's Sherlock Holmes detective stories. Created by Steven Moffat and Mark Gatiss, it stars Benedict Cumberbatch as Sherlock Holmes and Martin Freeman as Doctor John Watson. Nine episodes have been produced, the first three of which aired in 2010. Series two aired in 2012, and a third series aired in 2014. The third series has become the UK's most watched drama series since 2001.[1] Sherlock has been sold to over 200 territories.[2] The writers said that Freeman's casting developed the way in which Cumberbatch played Holmes.[11] The theme of "friendship" appealed to both Gatiss and Moffat.[24] Gatiss asserted the importance of achieving the correct tone for the character.

Sherlock Holmes Timeline 1880 July 3, Saturday -- "The Gloria Scott" 1881 June 23, Thursday -- "The Musgrave Ritual" July 16, 1881, Saturday -- Holmes meets Watson in Chapter One of A Study in Scarlet 1883 April 1, Sunday -- "The Speckled Band" (Y-M) dudeufugly.tumblr.com proudt2: Steven Moffat joins the whovians on Impossible astronaut day!(x) consultingaytective: we need to add “john trying to be deductive” to sherlock’s kink list because DAMN Sartorial style of Benedict Cumberbatch's Sherlock Holmes points the way for British men The BBC has got a lot right with Sherlock. The pitch-perfect casting, the smartness of the dialogue, the seamless melding of trad old school Holmes aesthetics and sensibilities with the modern (who knew text would compliment a Conan Doyle creation so effortlessly? Or GPS, for that matter?)

MoraMori Tea “Another very spicy Sherlock-inspired tea, with just a hint of smoke and sweetness. In the bag, the caramel and chocolate are barely noticeable, but it makes it all the more enticing. I had this with a drizzle of honey, and even though it toned down the spice, it was still the perfect pick-me-up. It's delightful in the morning for that little extra buzz to get you going, whether you have a building to blow up, or an assassination to carry out.