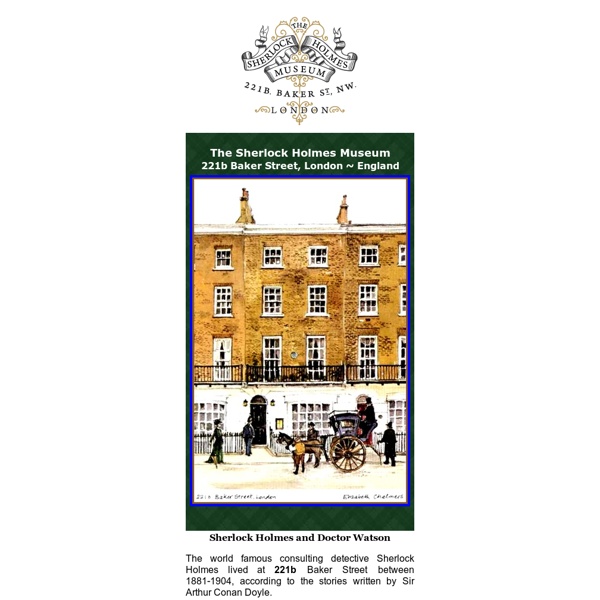 Sherlock Holmes and Doctor John H. Watson lived at 221b Baker Street between 1881-1904, according to the stories written by Sir Arthur Conan Doyle. The house is protected by the government due to its "special architectural and historical interest", while the 1st floor study overlooking Baker Street is still faithfully maintained for posterity as it was kept in Victorian Times. Step back in time, and when you visit London, remember to visit The World's Most Famous Address - 221b Baker Street - the Official Home of Sherlock Holmes! Open every day of the year (except Christmas Day) from 9.30am - 6pm Admission: Adult £10 Child £8 (under 16yrs)

Sherlock Holmes' London In the novels, the legendary detective Sherlock Holmes lived and solved many mysteries in Victorian London. London is the only city where you can feel what it is like to walk in Sherlock's footsteps and visit his home. The BBC series, Sherlock, stars Benedict Cumberbatch and Martin Freeman as modern day interpretations of the classic Conan Doyle characters, Sherlock Holmes and Dr John Watson. The pair solve mysteries and encounter many crimes as their adventures take them past many of London's top attractions. Robert Downey Jr and Jude Law have also recreated Holmes and Watson on movie screens in recent years.

How To Be Like Sherlock Holmes: 4 Insights From Research Wouldn’t it be great to be able to just look at someone and tell what they’re really like? Sherlock Holmes does this all the time and it’s incredibly cool. Check out this clip from the BBC show Sherlock. images Site Web pour cette image Maps of Baker Street in London in 1890 and today en.wikipedia.org Recherche par imageImages similaires The blog of Dr. John. H. Watson 20th April A New Beginning It feels odd. In the footsteps of Sherlock – part two A short walk to The Sherlock Holmes Museum and 221b Baker Street, arguably the most famous address in the world. Staff dressed in Victorian attire, the shop is on the ground floor and Holmes’ bedroom and study on the first floor with Watson’s on the second. Further up still and re-enactments of Sherlock’s cases are unnervingly showcased. It may not please the purist Sherlock enthusiast but I for one loved this good-natured and well presented museum. Pure gold. See Mrs Hudson’s Restaurant next stood – priceless.

100 Years of Sherlock Holmes on Film No character in the history of characters, actors, or words has been portrayed in film and TV more than Sir Arthur Conan Doyle’s Sherlock Holmes. It’s not even a contest. 14 actors have played Doctor Who‘s lead character between the two mediums, seven actors have played Batman, about 10 have played James Bond, and dozens have played Ebenezer Scrooge. 130 actors have played Sherlock Holmes dating all the way back to Károly Baumann in a Hungarian stage production and film in 1905. I mean, that’s a whole lot of sleuthing, especially considering Doyle wrote only 60 stories and not all of them were adapted into something. The drawing power of Holmes is his intense intelligence, his attention to detail which serves him well in his detecting, and his friendship/partnership with Dr.

crime scene par emeline.piquard sur Genially You are the investigator on that crime scene Escape game This is an Be the first to solve this case!