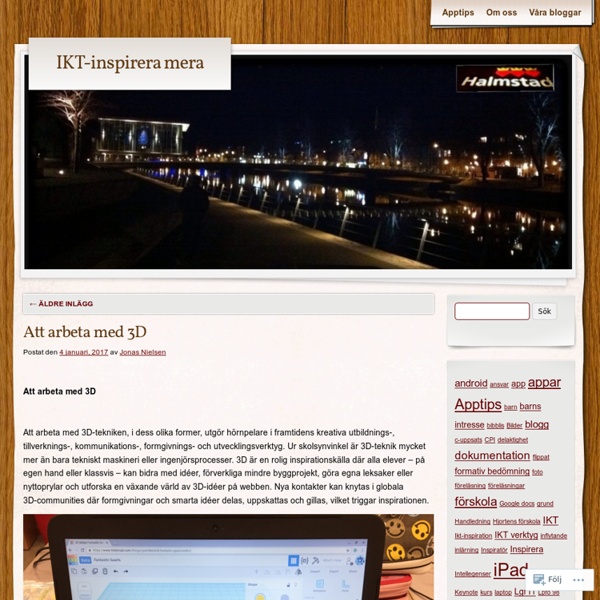 ART LESSONS LIBRARY Looking for an art lesson? Click on any of the three categories below to show you my collection of lessons, posts and tutorials for each topic…. Minecraft Education Edition: why it's important for every fan of the game At the densely crowded Bett show, a mammoth education technology conference taking up most of London’s ExCel venue, a vast audience has gathered to watch one particular demonstration. It is Microsoft’s newly announced Minecraft: Education Edition, a special version of the hugely successful building sim, specifically customised for the classroom environment. As the company representative highlights the main features, spectators photograph every single powerpoint slide. This one song teaches you basically everything you need to know about music theory Music theory. Why do this: When you can do this? A new way to learn those music theory fundamentals is being shared on social media, and all you have to do is sing.

5 Fantastic, Fast, Formative Assessment Tools I thought I could read my students' body language. I was wrong. As an experiment, I used Socrative when I taught binary numbers. What I learned forever changed my views on being a better teacher. Why Formative Assessment Makes Better Teachers 5 Ways to Collect Digital Exit Tickets One of the strategies that I use when creating lesson plans is to reflect on the previous lesson. Part of that reflection includes feedback from students. This can be done by simply asking students to raise their hands in response to a "did you get it?" type of question, but I like to have better record of responses than just a hand count. Here are some tools that can be used for collecting exit information from students. Google Forms Almost as soon as my school went 1:1 with netbooks six years ago, I started using Google Forms to collect responses from students.

Catching Snowflakes - grade 3 As you may have noticed, my past few projects have been decidedly winter themed, but I can't help it - today it was close to minus 40 with the windchill! I feel like I am just completely surrounded by winter and cold and snow right now, and it's definitely affecting my choice of art projects. I originally saw this idea as a collage on artsonia but decided to have my grade 3's do them with pastels instead, just to get them drawing and coloring. They began by drawing the face (with the little button nose on top) then drew the scarf and body. Following that, they added in more details, such as the mouth, the hair, and the sweater pattern. CC Syntax Highlighting/Code Completions v1.2 - Sublime Text 2 Hey all, I wrote a new ComputerCraft package for the text editor Sublime Text 2, which builds upon the current Lua one and includes colouring and code completions for all of the CC APIs. It also fixes the issue where the re-indent feature wouldn't work (it wouldn't code-fold at elseifs, or at functions defined in the way shown below), so you are able to use re-indent on screwed up code! It also adds support for declaring functions like this:

How to make music on a Chromebook Many music educators prefer iPads to Chromebooks. The iPad handles audio-recording extremely well, without the lag that occurs on some other tablets. As a result, musicians create and record music with iPad apps such as Garageband, Notion, Music Studio, and many more. The iPad is unquestionably a powerful mobile music-making device. Many educational technology administrators prefer Chromebooks to iPads. From the start, the Chromebook supports multiple accounts.

15 Resources to Create Images for Social Media Social Media Examiner Do you post images on social media? Would you like to create attractive images to share? When creating images for social media, quality makes a difference. Spiral You start by creating an online class group for your students. Your students can then use any internet-connected device, such as a tablet or mobile phone, to create their own profile on Spiral and join your online class group. You’re now good to go! Spiral apps mirror your normal learning activities but what’s really smart is that our unique three-way view solves the problem of how to get everyone joining in.

Paper Plate Ship's Porthole There have been many versions of this classic paper plate craft. This paper plate porthole has a different version as well, called the paper plate aquarium. When I created this particular project several years ago, I wanted it to look like your were peering through a ship’s porthole. This was originally published on Kaboose, then that site sold to Spoonful and it didn’t transfer for one reason or another. Apple Releases Swift Playgrounds Coding App for iPad Alongside iOS 10, tvOS 10, and watchOS 3, Apple today officially released Swift Playgrounds, a new app aimed at teaching both children and adults how to code through simple interactive coding exercises. It's meant to make learning to code "easy and fun" for everyone. First announced in June at WWDC, Swift Playgrounds is meant for beginners who have no experience with coding, and it will be deployed in numerous schools around the world as standard curriculum. "Everyone should have the opportunity to learn coding, and we are excited to bring Swift Playgrounds to the next generation of programmers looking for a fun and easy way to explore key coding concepts using real code," said Craig Federighi, Apple's senior vice president of Software Engineering.