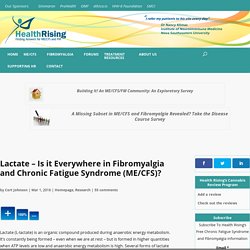 It’s constantly being formed – even when we are at rest – but is formed in higher quantities when ATP levels are low and anaerobic energy metabolism is high. Several forms of lactate are also produced by anaerobic bacteria in the gut. Lactate in small amounts is not bad – it actually reduces muscle fatigue – but the presence of high levels of lactate (lactic acid) signal that the anaerobic energy production process – which produces toxic metabolites that cause pain and fatigue – is in full bore. RELIEVING STRESS: MIND OVER MUSCLE. These muscle tension symptoms can be caused by emotional turmoil. 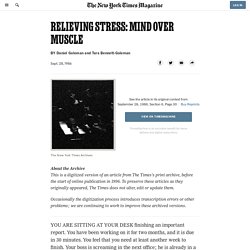 Fear, anger and frustration register in the body's muscles, and the ones in the tension triangle are quite sensitive to these emotions. Researchers have found, for example, that in the first two or three seconds of emotional upset, the muscles around the eyes, mouth and jaw almost always tighten. While emotion-bound muscle tension has long been familiar to clinicians, a new wave of muscle tension problems plagues people in the modern office, caused in part by the computer revolution. Untitled. Pyroluria is a genetically inherited but correctable biochemical imbalance involving an abnormality in hemoglobin synthesis. 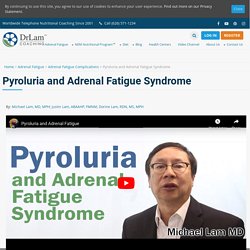 It can be purely genetic or acquired through environmental and emotional stress and especially from leaky gut syndrome and the overuse of antibiotics. Charles Darwin is thought to be afflicted by this condition. Benefits of smiling. We need to smile more because everyone likes being smiled at. 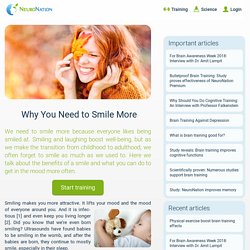 Smiling and laughing boost well-being, but as we make the transition from childhood to adulthood, we often forget to smile as much as we used to. Here we talk about the benefits of a smile and what you can do to get in the mood more often. Start training Smiling makes you more attractive. 7 Ways To Instantly Stimulate Your Vagus Nerve To Fight Inflammation, Depression And Migraines – Green Challenge. The vagus nerve (found right behind where you typically feel for your pulse) is the longest nerve in your body. 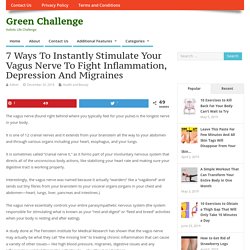 It is one of 12 cranial nerves and it extends from your brainstem all the way to your abdomen and through various organs including your heart, esophagus, and your lungs. It is sometimes called “cranial nerve X,” as it forms part of your involuntary nervous system that directs all of the unconscious body actions, like stabilizing your heart rate and making sure your digestive tract is working properly. Interestingly, the vagus nerve was named because it actually “wanders” like a “vagabond” and sends out tiny fibres from your brainstem to your visceral organs (organs in your chest and abdomen—heart, lungs, liver, pancreas and intestines.) Stress, Inflammation and Chronic Pain.

How stress influences disease: Study reveals inflammation as the culprit. Stress wreaks havoc on the mind and body. 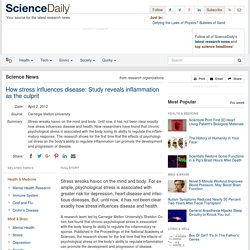 The Link Between Stress and Inflammation. A plethora of research shows that stress, a physical response to feeling challenged or threatened, induces or worsens medical conditions, including depression, cardiovascular diseases, neurodegenerative diseases, and cancer. 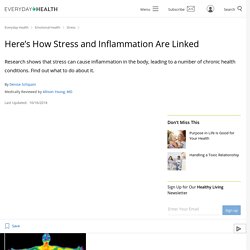 But the exact mechanism by which stress induces disease has remained a mystery. Until now. A review published in June 2017 in the journal Frontiers in Human Neuroscience concluded that inflammation is a common pathway of stress-related diseases. “Chronic inflammation is an essential component of chronic diseases,” the authors wrote. Still, the pathway from stress to inflammation to disease isn’t always clear. “There’s no one simple answer,” says Alka Gupta, MD, codirector of integrative health at the Brain and Spine Institute at Weill Cornell Medicine in New York City.

So if we can understand the ways in which chronic stress leads to low-level inflammation, we may be able to avoid at least some of that inflammation before it leads to or worsens disease. Stress, Inflammation, Immunity. Should You Exercise If You Have Adrenal Fatigue? By Dr. 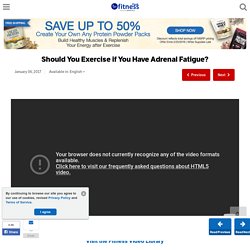 Mercola Your hypothalamic–pituitary–adrenal (HPA) axis is the system responsible for one of the most important functions in your body — the management of stress. This includes stress from every conceivable source, be it injury or disease, work or relationship problems. Exposure to chronic stress from overwork, chronic inflammation or long-term illness, for example, can result in HPA axis dysfunction, commonly — although perhaps somewhat inaccurately — referred to as "adrenal fatigue" or "adrenal exhaustion. " There's plenty of controversy on this issue. A more recent hypothesis is that most so-called adrenal fatigue cases are not really due to the adrenal glands' reduced ability to make cortisol.

While this can occasionally occur, more often than not, people have dysfunction in the brain signaling portion of the HPA axis, meaning the primary problem is with the hypothalamus and pituitary (the H and the P, and not so much the A, or adrenal portion of the axis). Glucocorticoids. 7 Common Adrenal Fatigue Symptoms (And How To Treat Them!) How Cortisol Can Destroy Muscle, Collagen & Other Proteins (Dr. Berg) Where is a majority of the stress stored? Stress Response Hyperstimulation - anxietycentre.com. Why Do Muscles Feel Stiff and Tight?