Gowalla: We're still in the location race. It's been fewer than four months since the much-hyped "location wars" of the South by Southwest Interactive Festival , where eager onlookers were quick to pit rival "check-in" services Foursquare and Gowalla against one another to see which one dominated the social-media-crazed nerdfest. 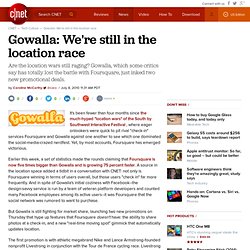 Yet, by most accounts, Foursquare has emerged victorious. Earlier this week, a set of statistics made the rounds claiming that Foursquare is now five times bigger than Gowalla and is growing 75 percent faster.

Plancast. Plancast Makes Arrangements With Search, Facebook Event Importin. Back in November, we wrote about the launch of Plancast, a new service by TechCrunch alum Mark Hendrickson that’s perhaps best described as “Foursquare for the future.” 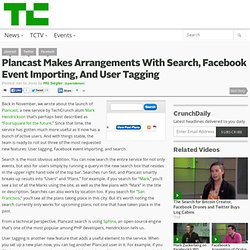 Since that time, the service has gotten much more useful as it now has a bunch of active users. And with things stable, the team is ready to roll out three of the most requested new features: User tagging, Facebook event importing, and search. Search is the most obvious addition. You can now search the entire service for not only events, but also for users simply by running a query in the new search box that resides in the upper right hand side of the top bar. Searches run fast, and Plancast smartly breaks up results into “Users” and “Plans.” From a technical perspective, Plancast search is using Sphinx, an open-source engine that’s one of the most popular among PHP developers, Hendrickson tells us. User tagging is another new feature that adds a useful element to the service. Plancast Is Foursquare… For The Future. If you’re going to leave your job at TechCrunch, you better have a good reason. 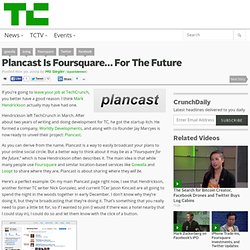 I think Mark Hendrickson actually may have had one. Hendrickson left TechCrunch in March. After about two years of writing and doing development for TC, he got the startup itch. He formed a company, Worldly Developments, and along with co-founder Jay Marcyes is now ready to unveil their project: Plancast. As you can derive from the name, Plancast is a way to easily broadcast your plans to your online social circle. Here’s a perfect example: On my main Plancast page right now, I see that Hendrickson, another former TC writer Nick Gonzalez, and current TCer Jason Kincaid are all going to spend the night in the woods together in early December.

But it’s not just about events that you need to plan for. Dismoioù - Ton guide personnalisé: Restaurants, Hôtels, Shopping. Fire Eagle. Le réseau social de votre vie locale, ma-residence.fr. Aka-aki. Go out. Go discover. Go share. Gowalla. Watch Gowalla Pretend It's Not Fighting For Its Life Against Fou. Foursquare vs. Gowalla: Inside the Check-In Wars. Foursquare And Gowalla In A Dead Heat In The Location War. Foursquare vs. Gowalla: Location-Based Throwdown. Shane Snow is a technology journalist in New York City. 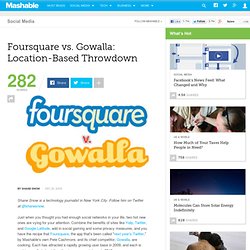 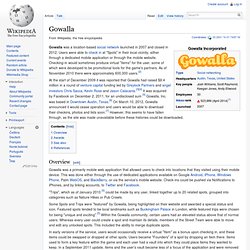 Users were able to check in at "Spots" in their local vicinity, either through a dedicated mobile application or through the mobile website. Checking-in would sometimes produce virtual "items" for the user, some of which were developed to be promotional tools for the game's partners. As of November 2010 there were approximately 600,000 users.[2] Overview[edit] "Trips", which as of January 2010 [5] could be made by any user, linked together up to 20 related spots, grouped into categories such as Nature Hikes or Pub Crawls.

Some Spots and Trips were "featured" by Gowalla, being highlighted on their website and awarded a special status and icon. Gowalla Adds Real-time Feeds and Activity Streams For Maximum Ma. Location based social network Gowalla quietly released a big new feature today: real-time PubSubHubbub feeds for check-ins by people and at locations. 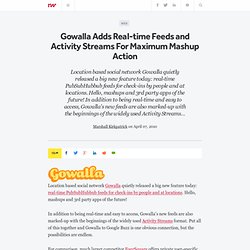 Hello, mashups and 3rd party apps of the future! In addition to being real-time and easy to access, Gowalla's new feeds are also marked-up with the beginnings of the widely used Activity Streams format. Put all of this together and Gowalla to Google Buzz is one obvious connection, but the possibilities are endless. Which App Does Checkins Best? [STUDY] uTest's Checkin Challenge report looked at checkin applications and found that Foursquare had the least amount of reported bugs and ranked highest in terms of ease of use, while Gowalla won in the location accuracy category. 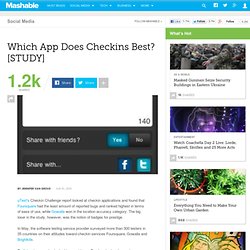 The big loser in the study, however, was the notion of badges for prestige. In May, the software testing service provider surveyed more than 300 testers in 35 countries on their attitudes toward checkin services Foursquare, Gowalla and Brightkite. Participants were also tasked to report bugs.