Keeping up with the Jones Act – Hawaii Business Magazine. Patrick Novak, CEO of The French Gourmet, a Hawaii company that specialized in artisan frozen pastry dough, reflected on the issues that killed his once-thriving business and kept coming back to the Jones Act. 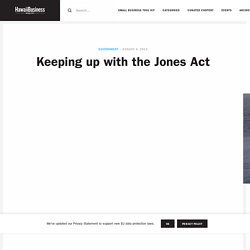 The company was featured in the August 2010 issue of Hawaii Business as among the small, local companies flourishing on a global scale. Novak launched French Gourmet in 1994 and began exporting products to the mainland and then to places as far away as Singapore, Hong Kong and Dubai. The U.S. Small Business Administration named him “Exporter of the Year” in 1997, but prosperity soon became progressively more difficult to maintain due to shipping-rate hikes. The business shut down in April. “We used to pay just over $4,000 to ship a 40-foot freezer container to Dubai,” says Novak, who says exports made up about 70 percent of his sales. Novak believes businesses have difficulty surviving in Hawaii largely due to the high shipping costs.

U.S. Opioid Addiction Is a Huge Problem, but Pain Prescriptions Are Not the Cause. The Impact of Government Spending on Economic Growth. For more on government spending, read Brian Reidl's new paper "Why Government Does Not Stimulate Economic Growth"------ For more information, see the supplemental appendix to this paper. 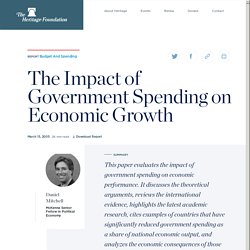 Policymakers are divided as to whether government expansion helps or hinders economic growth. Advocates of bigger government argue that government programs provide valuable "public goods" such as education and infrastructure. They also claim that increases in government spending can bolster economic growth by putting money into people's pockets.

Proponents of smaller government have the opposite view. Offline 4: Writing with Sources - Offline Option for Library Workshops - LibGuides at Empire State College. While You Weren't Looking, Trump Basically Killed Dodd-Frank. Video Lecture 1, Intermediate Microeconomic Theory. What The VIX Is Telling Us About This Correction. Volatility Index (VIX) [ChartSchool] Introduction. 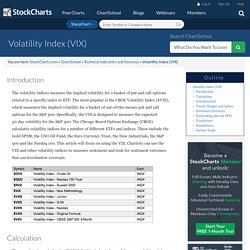 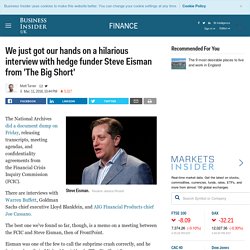 Community Reinvestment Act. Graham Leach Bailey. Bank Information. Big Short. Dodd-Frank. Uncertainty and the Geography of the Great Recession. Did high levels of economic and policy uncertainty contribute to the large and persistent increase in unemployment between 2007 and 2009? 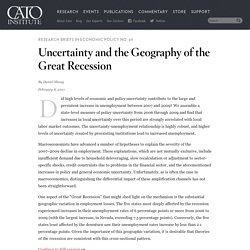 We assemble a state-level measure of policy uncertainty from 2006 through 2009 and find that increases in local uncertainty over this period are strongly correlated with local labor market outcomes. The uncertainty-unemployment relationship is highly robust, and higher levels of uncertainty created by preexisting institutions lead to increased unemployment. Macroeconomists have advanced a number of hypotheses to explain the severity of the 2007–2009 decline in employment. These explanations, which are not mutually exclusive, include insufficient demand due to household deleveraging, slow recalculation or adjustment to sector-specific shocks, credit constraints due to problems in the financial sector, and the aforementioned increases in policy and general economic uncertainty. 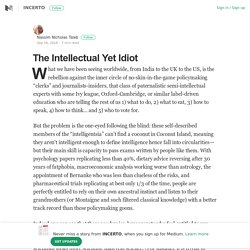 Why? Simply, in most countries, the government’s role is between five and ten times what it was a century ago (expressed in percentage of GDP). The IYI seems ubiquitous in our lives but is still a small minority and is rarely seen outside specialized outlets, think tanks, the media, and universities — most people have proper jobs and there are not many openings for the IYI. Beware the semi-erudite who thinks he is an erudite. 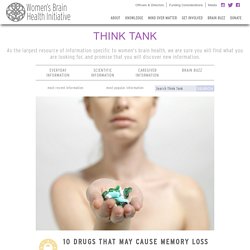 Armon B. Neel Jr. for AARP: Are you having trouble remembering things? For a long time doctors dismissed forgetfulness and mental confusion as a normal part of aging. Most people are familiar with at least some of the things that can impair memory, including alcohol and drug abuse, heavy cigarette smoking, head injuries, stroke, sleep deprivation, severe stress, vitamin B12 deficiency, and illnesses such as Alzheimer’s disease and depression.

But what many people don’t realize is that many commonly prescribed drugs also can interfere with memory. 1. Why they are prescribed: Benzodiazepines are used to treat a variety of anxiety disorders, agitation, delirium and muscle spasms, and to prevent seizures. How they can cause memory loss: Benzodiazepines dampen activity in key parts of the brain, including those involved in the transfer of events from short-term to long-term memory. Money & Banking.