Ship of Theseus. Philosophical question Thought experiment[edit] If it is supposed that the famous ship sailed by the hero Theseus in a great battle was kept in a harbour as a museum piece, and as the years went by some of the wooden parts began to rot and were replaced by new ones; then, after a century or so, every part had been replaced. 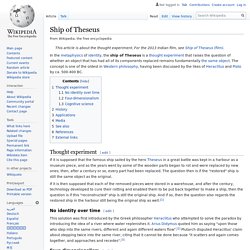 The question then is if the "restored" ship is still the same object as the original. If it is then supposed that each of the removed pieces were stored in a warehouse, and after the century, technology developed to cure their rotting and enabled them to be put back together to make a ship, then the question is if this "reconstructed" ship is still the original ship. And if so, then the question also regards the restored ship in the harbour still being the original ship as well.[1] No identity over time[edit] Four-dimensionalism[edit] Cognitive science[edit] History[edit] Applications[edit] The paradox appears in several more applied fields of philosophy. Media[edit] Grading. Grading. In the Syllabus. Yes, Your Opinion Can Be Wrong. I spend far more time arguing on the Internet than can possibly be healthy, and the word I’ve come to loath more than any other is “opinion”. 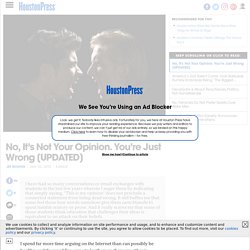 Garding. Billy Madison - Everyone is now dumber. American Council of Learned Societies. The deadline for this program has passed. 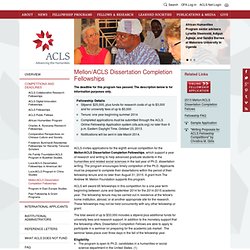 The description below is for information purposes only. Fellowship Details Stipend: $25,000, plus funds for research costs of up to $3,000 and for university fees of up to $5,000Tenure: one year beginning summer 2014Completed applications must be submitted through the ACLS Online Fellowship Application system (ofa.acls.org) no later than 9 p.m. Eastern Daylight Time, October 23, 2013.Notifications will be sent in late March 2014. ACLS will award 65 fellowships in this competition for a one-year term beginning between June and September 2014 for the 2014-2015 academic year. The total award of up to $33,000 includes a stipend plus additional funds for university fees and research support. Eligibility Application Requirements Applications must be submitted online and must include: Note that transcripts are not required. 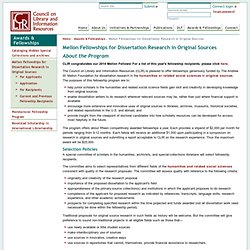 For a list of this year's fellowship recipients, please click here. The Council on Library and Information Resources (CLIR) is pleased to offer fellowships generously funded by The Andrew W. Mellon Foundation for dissertation research in the humanities or related social sciences in original sources. The purposes of this fellowship program are to: help junior scholars in the humanities and related social science fields gain skill and creativity in developing knowledge from original sourcesenable dissertation writers to do research wherever relevant sources may be, rather than just where financial support is availableencourage more extensive and innovative uses of original sources in libraries, archives, museums, historical societies, and related repositories in the U.S. and abroad, andprovide insight from the viewpoint of doctoral candidates into how scholarly resources can be developed for access most helpfully in the future.

Selection Policies. Awesome Program Allows You To Volunteer In Order To Pay Back Your Student Loans. If you’re struggling to chip away at your student loan debt with your current salary, you probably never considered that working at a non-profit — notoriously not high payers, especially for confused recent post-grads — could be your solution to emerging debt-free in just a few short years. 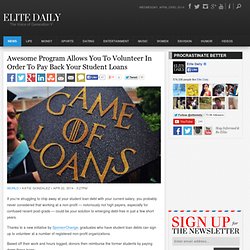 Thanks to a new initiative by SponsorChange, graduates who have student loan debts can sign up to volunteer at a number of registered non-profit organizations. School Loan Default. Emerge scholarships. The Charlotte W. Newcombe Doctoral Dissertation Fellowship. The Fellowship The Newcombe Fellowships are provided to Ph.D. candidates at American institutions located in the United States who will complete their dissertations during the fellowship year. 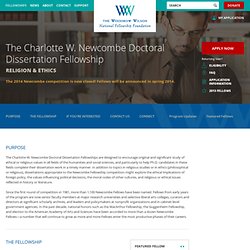 The fellowship year for applications accepted by the deadline in 2013 will be for the academic year 2014-2015. In the current Newcombe competition, at least 22 non-renewable Fellowships of $25,000 will be awarded for 12 months of full-time dissertation writing; in addition, Fellows' graduate schools will be asked to waive tuition and/or remit some portion of their fees. International Dissertation Research Fellowship (IDRF) Program — Programs. Forest - Stay focused, be present. Getting Started With the Japanese Language. We've had a lot of questions on tumblr about how to get started in learning Japanese, so we thought it necessary to summarize what we've found useful throughout our own studies and hopefully these will help you jump-start your own adventures in Japanese. 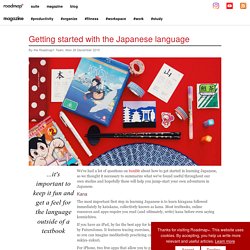 Kana The most important first step in learning Japanese is to learn hiragana followed immediately by katakana, collectively known as kana. Most textbooks, online resources and apps require you read (and ultimately, write) kana before even saying konnichiwa. If you have an iPad, by far the best app for learning kana is Study Japanese for iPad by FutureJones. It features tracing exercises, quizzes, sound and even relaxing music so you can imagine meditatively practicing calligraphy in the comfort of your own sukiya-zukuri.

For iPhone, two free apps that allow you to practice writing are by hk2006 – one for hiragana and one for katakana. Tumblr. Tumblr. Realities. Decoding dress codes - Aug-mentation. Time is an Illusion. In Memory of Elliot Sperling: A 2014 Interview with the American Tibet Scholar « China Change. Tang Danhong, translated by Anne Henochowicz, January 26, 2018 Elliot Sperling died in his sleep at the end of January, 2017 (the Wikipedia entry puts the date of his death on January 29, 2017). 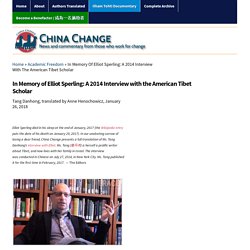 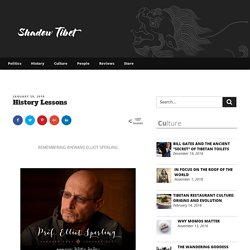 Although I have become, by default, the unofficial obituary writer in the exile Tibetan world, I could not, at the time then, bring myself to perform the necessary honors for my departed friend. In fact I was not able to write a single blog for a whole year. But a heartwarming plethora of articles and posts by Elliots friends and students immediately filled the internet. Voice of America Tibetan News, Radio & TV. Video & Audio. བོད་སྐད་སྡེ་ཚན། Free Translations of Tibetan Buddhist Texts. Buy the Women of Tibet DVDs - Educational Use. Women of Tibet: Gyalyum Chemo-The Great Mother & Women of Tibet: A Quiet Revolution are fully protected by U.S. 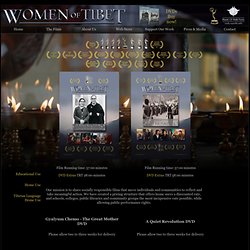 Copyright. Purchase does not include rights to rent, loan for a fee, sublicense to others, or resell without permission. DVD’s may not be altered, duplicated, digitized, reproduced (by videotape or other means), televised, or electronically transmitted in whole or part without specific authorization from Frame of Mind Films, Inc. Purchase of these films at the Institutional Rate includes public performance rights allowing the film to be shown before public audiences within libraries, educational institutions and community centers. It does not include showing our films at paid admission screenings, including screening at workshops, groups, gatherings, events, film festivals, film groups, or fund-raising events of any kind. Extinct Humans Passed High-Altitude Gene to Tibetans.

It bears the name of Turrell V. Wylie, who described the scheme in an article, A Standard System of Tibetan Transcription, published in 1959.[1] It has subsequently become a standard transliteration scheme in Tibetan studies, especially in the United States. THL’s Online Tibetan Transliteration Converter. THL Tibetan to English Translation Tool. Gedun_Rabsal. Yalasoo Tibetan Font Software Book Music. Qomolangma Wylie Keyboard is developed and maitained by China Tibetology Research Center. It is developed based on Tibetan transliteration systems.