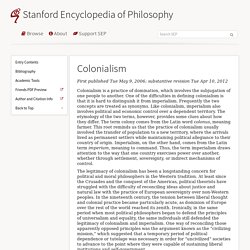 Definition and Outline Colonialism is not a modern phenomenon. World history is full of examples of one society gradually expanding by incorporating adjacent territory and settling its people on newly conquered territory. The ancient Greeks set up colonies as did the Romans, the Moors, and the Ottomans, to name just a few of the most famous examples. Colonialism, then, is not restricted to a specific time or place. The difficulty of defining colonialism stems from the fact that the term is often used as a synonym for imperialism. Achieving Social Justice: Indigenous Rights and Australia's Future - Larissa Behrendt. Part_1_chapter3. Impacts of Settlement on Aboriginal People. 29. 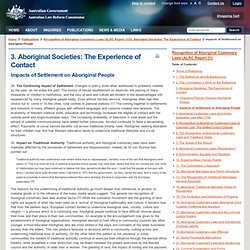 The Continuing Impact of Settlement. Changes in policy, even when addressed to problems created by the past, do not erase the past. The history of forced resettlement on reserves, the placing of many thousands of children in institutions, and the loss of land and culture are evident in the disadvantages still experienced by many Aboriginal people today. Even without forcible removal, Aborigines often had little choice but to ‘come in’ to the cities, rural centres or pastoral stations.[37] The coming together in settlements and missions of many different groups with different languages and customs created new tensions.

The availability of Western medical skills, education and technology increased the degree of contact with the outside world and Anglo-Australian ways. 30. Traditional authority was undermined even where there was no dispossession, certainly none of the sort that Aborigines were aware of. 31. There are other well known figures: 32. 33. 34. Rights and freedoms - history(10) - ABC Splash - Home > Rights and freedoms Add this collection to your favourites About this collection Rights and freedoms After the atrocities of World War II the United Nations General Assembly created an international treaty called the Universal Declaration of Human Rights. 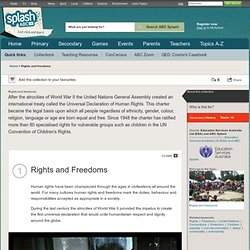 This charter became the legal basis upon which all people regardless of ethnicity, gender, colour, religion, language or age are born equal and free. SBS: First Australians. Indigenous Australians Overview. Humanrights.gov. Back to Bringing Them Home education module pages. 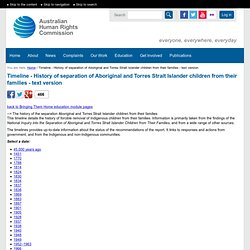 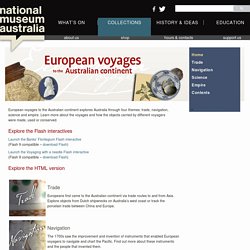 Trade Europeans first came to the Australian continent via trade routes to and from Asia. Explore objects from Dutch shipwrecks on Australia's west coast or track the porcelain trade between China and Europe. Navigation. Repatriation. WARNING: Visitors should be aware that this website includes images and names of deceased people that may cause sadness or distress to Aboriginal and Torres Strait Islander peoples. 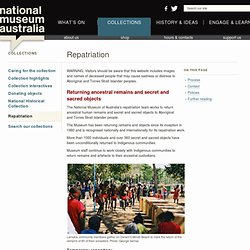 Museum staff continue to work closely with Indigenous communities to return remains and artefacts to their ancestral custodians. Resistance. WARNING: Visitors should be aware that this website includes images and names of deceased people that may cause sadness or distress to Aboriginal and Torres Strait Islander peoples. 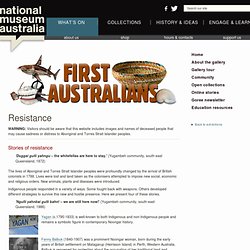 Stories of resistance 'Duggai gulli yahngu – the whitefellas are here to stay.' (Yugambeh community, south-east Queensland, 1872) The lives of Aboriginal and Torres Strait Islander peoples were profoundly changed by the arrival of British colonists in 1788. Lives were lost and land taken as the colonisers attempted to impose new social, economic and religious orders. Indigenous people responded in a variety of ways. 'Ngulli yahnbai gulli bahn! Yagan (c.1795-1833) is well-known to both Indigenous and non-Indigenous people and remains a symbolic figure in contemporary Noongar history. Fanny Balbuk (1840-1907) was a prominent Noongar woman, born during the early years of British settlement on Matagarup (Heirisson Island) in Perth, Western Australia.