10 Reasons Why 2013 Will Be The Year You Quit Your Job. Editor’s note: James Altucher is an investor, programmer, author, and several-times entrepreneur. 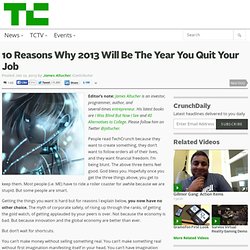 His latest books are I Was Blind But Now I See and 40 Alternatives to College. Please follow him on Twitter @jaltucher. People read TechCrunch because they want to create something, they don’t want to follow orders all of their lives, and they want financial freedom. I’m being blunt. The above three items feel good. Getting the things you want is hard but for reasons I explain below, you now have no other choice. But don’t wait for shortcuts. You can’t make money without selling something real. And now it’s too late. Jabba’s newest employee 1) The middle class is dead. He said, “look out the windows.” “Not all the news is bad,” he said. And that’s the new paradigm. And it was. 2) You’ve been replaced. I’m on the board of directors of a temp staffing company with $600 million in revenues.

Flush. Robots are the new middle class 3) Corporations don’t like you. “What’s the problem?” Becoming An Entrepreneur Is Less Scary Than You Think (A Case Study) "A Year from Now You May Wish You Had Started Today" Characteristics of the Entrepreneur: Characteristics of the Entrepreneur: Social Creatures, Not Solo Heroes Tom Byers, Stanford University tbyers@stanford.edu Heleen Kist, Stanford University heleen@unforgettable.com Robert I. 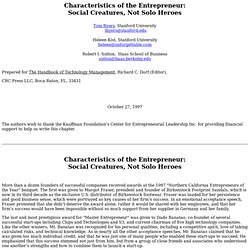 Sutton@haas.berkeley.edu Prepared for The Handbook of Technology Management, Richard C. CRC Press LLC, Boca Raton, FL, 33431 October 27, 1997 The authors wish to thank the Kauffman Foundation’s Center for Entrepreneurial Leadership Inc. for providing financial support to help us write this chapter. More than a dozen founders of successful companies received awards at the 1997 "Northern California Entrepreneurs of the Year" banquet. 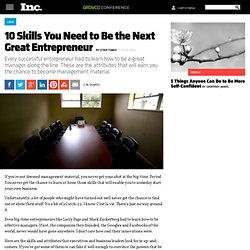 Period. You never get the chance to learn or hone those skills that will enable you to someday start your own business. Unfortunately, a lot of people who might have turned out well never get the chance to find out or show their stuff. It's a bit of a Catch-22, I know. C'est la vie. Even big-time entrepreneurs like Larry Page and Mark Zuckerberg had to learn how to be effective managers. Here are the skills and attributes that executives and business leaders look for in up-and-comers. Seeing the big picture. Hunger to achieve. The Little Known Personality Trait That Predicts Entrepreneurial Success. Everybody, Somebody, Anybody or Nobody? Everybody, Somebody, Anybody or Nobody? 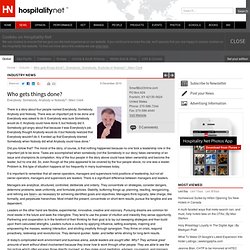 | Marc Clark There is a story about four people named Everybody, Somebody, Anybody and Nobody. There was an important job to be done and Everybody was asked to do it. Everybody was sure Somebody would do it. Anybody could have done it, but Nobody did it. Did you follow that? It is important to remember that all owner-operators, managers and supervisors hold positions of leadership, but not all owner-operators, managers and supervisors are leaders.

Managers are analytical, structured, controlled, deliberate and orderly. Leaders on the other hand are flexible, experimental, innovative, creative and visionary. In today's complicated work environment and business arena, astute leaders are sought after. Now that you have a better understanding of effective leadership, Nobody will be left behind, Anybody can come to you for guidance, Somebody will now reach their potential and Everybody will be happy. 12 Lessons Steve Jobs Taught Guy Kawasaki. Steve Jobs Brainstorms with NeXT Team.