ChemReference: Periodic Table and Chemistry Reference. The Elements by Theodore Gray. Praise for The Elements The printing quality of this book is truly extraordinary. 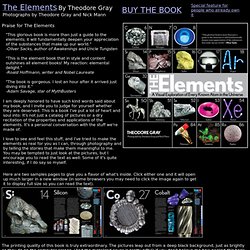 The pictures leap out from a deep black background, just as brightly as they do on the computer screen. (And the metalized cover is pretty nifty!) If you don't believe me how packed this book is with elements, take a look at this complete catalog of the pages in the book. If you love science, or art, or life, or anything really, you'll love this book. If it isn't obvious, this book makes an outstanding gift, especially if you buy a signed copy directly from me (you can use the comment field on the final checkout page to request a specific inscription, or if you leave it blank you'll just get my lovely signature). Click here to buy the book! If you already own The Elements and want to find out more about the samples shown in it, and even see rotating 3D video of almost all of them, this page will show you everything.

Superfluid helium. BBC News - Brian Cox demonstrates why atoms are empty. Grace Hopper - Nanoseconds. The Big Bang Never Happened Part 1. The Fabric of the Cosmos: What Is Space? THE ANIMATE AND THE INANIMATE, Chapter 1. Home Contents Next Among the physical laws it is a general characteristic that there is reversibility in time; that is, should the whole universe trace back the various positions that bodies in it have passed through in a given interval of time, but in the reverse order to that in which these positions actually occurred, then the universe, in this imaginary case, would still obey the same laws. 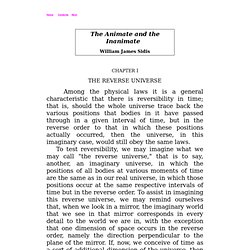 To test reversibility, we may imagine what we may call "the reverse universe," that is to say, another, an imaginary universe, in which the positions of all bodies at various moments of time are the same as in our real universe, in which those positions occur at the same respective intervals of time but in the reverse order. With this auxiliary, imaginary universe, our test of the reversibility of any given physical law or process would be, whether that law holds good, whether that process still subsists in the reverse universe. So much for pure kinematics. Warp Drive More Possible Than Thought, Scientists Say. HOUSTON — A warp drive to achieve faster-than-light travel — a concept popularized in television's Star Trek — may not be as unrealistic as once thought, scientists say. 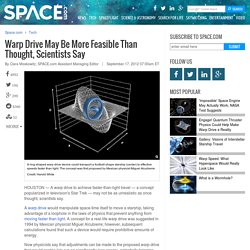 A warp drive would manipulate space-time itself to move a starship, taking advantage of a loophole in the laws of physics that prevent anything from moving faster than light. A concept for a real-life warp drive was suggested in 1994 by Mexican physicist Miguel Alcubierre; however, subsequent calculations found that such a device would require prohibitive amounts of energy. Now physicists say that adjustments can be made to the proposed warp drive that would enable it to run on significantly less energy, potentially bringing the idea back from the realm of science fiction into science. "There is hope," Harold "Sonny" White of NASA's Johnson Space Center said here Friday (Sept. 14) at the 100 Year Starship Symposium, a meeting to discuss the challenges of interstellar spaceflight. Warping space-time Laboratory tests. Conversations about a life in science. 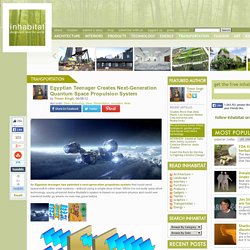 While it is not quite warp-drive technology, young physicist Aisha Mustafa’s system is based on quantum physics and could see mankind boldly go where no man has gone before. The 19-year-old is further proof that young minds produce fresh new ideas. Researchers send instant message with neutrinos. A group of scientists led by researchers from the University of Rochester and North Carolina State University have for the first time sent a message using a beam of neutrinos – nearly massless particles that travel at almost the speed of light. 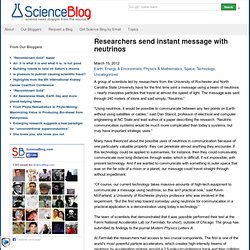 The message was sent through 240 meters of stone and said simply, “Neutrino.” “Using neutrinos, it would be possible to communicate between any two points on Earth without using satellites or cables,” said Dan Stancil, professor of electrical and computer engineering at NC State and lead author of a paper describing the research. “Neutrino communication systems would be much more complicated than today’s systems, but may have important strategic uses.” Many have theorized about the possible uses of neutrinos in communication because of one particularly valuable property: they can penetrate almost anything they encounter. At Fermilab the researchers had access to two crucial components. Watch Man-Controlled Bacteria Build a Nanoscale Pyramid. Why Nikola Tesla was the greatest geek who ever lived.

Additional notes from the author: If you want to learn more about Tesla, I highly recommend reading Tesla: Man Out of Time Also, this Badass of the week by Ben Thompson is what originally inspired me to write a comic about Tesla.

Ben's also got a book out which is packed full of awesome. There's an old movie from the 80s on Netflix Instant Queue right now about Tesla: The Secret of Nikola Tesla. It's corny and full of bad acting, but it paints a fairly accurate depiction of his life. I wrote a response to the Forbes article about my Tesla comic. Tech Trends. Physics and Astronomy.